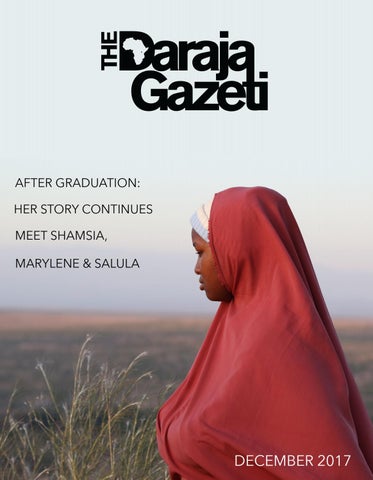 MARYLENE THE TEACHER “There isn’t a day that goes by that I am not grateful to be After 4 years at Daraja Academy, her hard work paid off. The young girl who refused to let her education slip away the woman that Daraja has helped me become.” graduated from high school with honors. On the rigorous Kenyan National Exams, Marylene earned a score that placed her amongst the top 10 girls in the district. The score also earned her government funding to earn a degree in Education at Rongo University.

Despite graduating from eighth grade as the number one student in her primary school, Marylene could not find the money to continue her education. Members of her immediate family began to express that the time to further her education had passed; it was now time to find a job and help support her family. Marylene, however, knew In the short film The Girls of Daraja, Marylene prophetically states, “I want to be a teacher, and saying that I want to her value and potential and never gave up hope.

be a teacher is like releasing something that is in my heart.”

In the fall of 2008, she heard a rumor around Nanyuki that a small school was opening and offering full schol- She has now achieved her dream. arships to exceptional girls living in poverty. In early 2009 she received one of those scholarships to Daraja Academy, Today, you will still find Marylene in a Daraja classroom – where she found her school and a home. this time as a teacher and permanent staff member. She instructs lessons in History, Swahili, and W.I.S.H. to the When Marylene arrived with the members of Daraja’s pi- newest group of Daraja girls, all as eager as she was to oneer class, she invested completely in her studies and release what is in their hearts. Her journey from Daraja the school’s unique philosophy of leadership and commu- girl to Daraja teacher has made Marylene an incredible nity service. Each week she devoured concepts taught in role model and mentor to the next generation of students. W.I.S.H. (Women of Integrity, Strength & Hope) Class.

SALULA THE STUDENT “When I was nine years old I challenged the idea that girls should get married and not go to school…” began Salula’s college admissions essay, which details her survival of female genital mutilation and escape from an arranged marriage as a child.

When Salula was 8 years old she went through “the cut.” During the week it took for the bleeding to stop, her father arranged her marriage to a 49-year-old man in exchange for livestock. On the morning of her wedding, while the women of her tribe painted her with red ore and dressed her in Masaai beads, Salula was thinking about how much she hoped to return to school. Fortunately, she was rescued by local police and non-profit workers from the Tasaru Rescue Center, where she remained until she earned a place at Daraja Academy. At Daraja, Sylvia loved to play volleyball, write poetry, read novels, and just enjoy being a girl. In W.I.S.H. class, she learned techniques to raise her voice to achieve change. While participating in the Transition Program she spent time teaching the community and working with pre-teens. She has just completed her first semester at the Kenya Institute of Community Development and Social Work in Nairobi. Salula loves college and wants to “become a lawyer to fight for the rights of girls in my country.”

“I will spend the whole of my life challenging early marriages and FGM by teaching other girls their rights. I will teach them to have a voice as women to challenge this idea in the community. I believe that when we hold hands as girls, we can make a difference in society.”

SHAMSIA THE SPEECHWRITER In her initial application to study at Daraja Academy, Shamsia wrote, “We girls, we don’t want to always be ruled by boys, we also want to be leaders.” Shamsia has taken every step since to become a leader. Academically, Shamsia excelled at Daraja, and graduated near the top of her class. She is currently in her third year at the University of Nairobi, working toward a degree in International Security. Because of her experiences at Daraja in Peace and Conflict Resolution, she was chosen for an extremely competitive internship at the Ministry of Foreign Affairs. She has gained invaluable experience: “I can comfortably draft memos, briefs, letters, position papers…I get to meet people like ambassadors and secretaries. I once attended a summit on the Somali refugees, I got to see how the Heads of State talk to each other.” More than your regular intern, Shamsia collaborated with other staff members to write a speech given by President Kenyatta himself. The speech was given at the IGAD Summit on Durable Solutions for Somali Refugees this past March. “I was so proud,” recounted Shamsia.

“I know I am a better person because of Daraja, and there is much more that I can do with everything Daraja equipped me with. I can’t wait for the day that I can give back to Daraja as much as I can. I will always be a Daraja girl.” Shamsia intends to pursue a Master’s Degree, and her dream is to become an ambassador. She is quickly becoming the leader she always wanted to be. 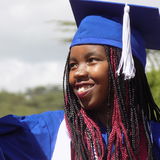 All the news from campus, circa December 2017.

All the news from campus, circa December 2017.