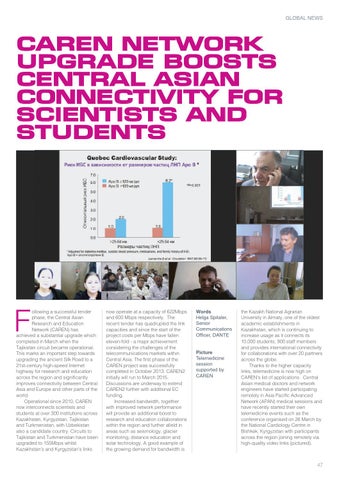 ollowing a successful tender phase, the Central Asian Research and Education Network (CAREN) has achieved a substantial upgrade which completed in March when the Tajikistan circuit became operational. This marks an important step towards upgrading the ancient Silk Road to a 21st-century high-speed Internet highway for research and education across the region and significantly improves connectivity between Central Asia and Europe and other parts of the world. Operational since 2010, CAREN now interconnects scientists and students at over 300 institutions across Kazakhstan, Kyrgyzstan, Tajikistan and Turkmenistan, with Uzbekistan also a candidate country. Circuits to Tajikistan and Turkmenistan have been upgraded to 155Mbps whilst Kazakhstan’s and Kyrgyzstan’s links

now operate at a capacity of 622Mbps and 600 Mbps respectively. The recent tender has quadrupled the link capacities and since the start of the project costs per Mbps have fallen eleven-fold - a major achievement considering the challenges of the telecommunications markets within Central Asia. The first phase of the CAREN project was successfully completed in October 2013. CAREN2 initially will run to March 2015. Discussions are underway to extend CAREN2 further with additional EC funding. Increased bandwidth, together with improved network performance will provide an additional boost to research and education collaborations within the region and further afield in areas such as seismology, glacier monitoring, distance education and solar technology. A good example of the growing demand for bandwidth is

the Kazakh National Agrarian University in Almaty, one of the oldest academic establishments in Kazakhstan, which is continuing to increase usage as it connects its 10,000 students, 900 staff members and provides international connectivity for collaborations with over 20 partners across the globe. Thanks to the higher capacity links, telemedicine is now high on CAREN’s list of applications. Central Asian medical doctors and network engineers have started participating remotely in Asia Pacific Advanced Network (APAN) medical sessions and have recently started their own telemedicine events such as the conference organised on 26 March by the National Cardiology Centre in Bishkek, Kyrgyzstan with participants across the region joining remotely via high-quality video links (pictured). 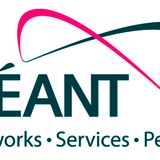