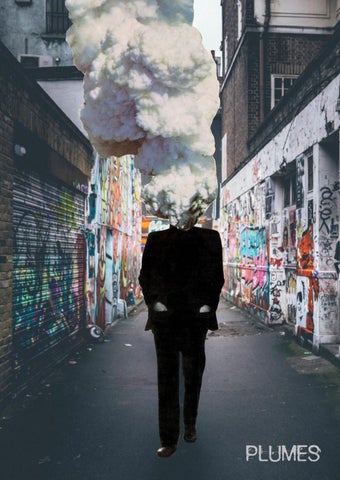 â&amp;#x20AC;&amp;#x153;There is some exceptionally sharp motif work that collides our associative meaning throughout; we end up in various baths, beds, trains and windows that expand on the previous handlings of those objects. What is most wonderful about these journeys is that a reader is disassociated from the body in the process which makes the reading all the more visceral, yet pinned to various characters, personas, the &#39;I&#39; - we are rarely lost, despite the many attempts to lose us. The voice and intention of this work is clear, inspired and interested in reaching into the everyday objects of our menial lives and transforming them into something far more revelatoryâ&amp;#x20AC;? - Antosh Wojcik

A note on Plumes

This book is a collection of poems from the vast and sprawling everydays of this last year. It is the first collection I have ever made, and it was not an easy collection to collate. Each poem was written at different times on different days about different things. They are lines of thought separated by an immense expanse of mind-time and neural lakes. But each of these poems, these Plumes, will always connect, no matter how far apart they might seem. They bleed together, into one another, as they disperse into the cloud which oversees them all.

Bedroom wisdoms The bed is trying to eat me; mattress wide and pillows bearing, duvet licking between my legs and salivating August sweat stains â&amp;#x20AC;&amp;#x201C; not so sweet as early June; more savoury, like dead skin cells from body, head, mind dandruff philosophies running beaded around the brain, through the scalp and into the hair; chasing pairs of oxygen, hoping to inhale bedroom wisdoms and deliver them to the edges of the pupils, wider and wider opening â&amp;#x20AC;&amp;#x201C; permanent fox-in-torchlight stares; thoughts found in battery gold, blinking into nothing before becoming the insides of a star.

Tuesday Last night he broke both his kneecaps with the wristwatch-alarm he’d strapped to his head. Then he strangled both his eyes with the cord that gave his virtual-self life. This morning he dipped them, dangling from his face, into the puddle of a bleeding-out ink cartridge and rolled them across a used piece of lined paper. In the bath he swallowed the showerhead in the hope that it might hydrate him, and put the toothpaste in his ears so he could listen without the need to lip-read. Then he went fishing, at a public swimming pool without water and got chlorine-shock because he forgot to wear sun cream. That afternoon the oven had a breakdown because he hadn’t paid the bills. So he microwaved his feet instead. Martha said they’d gone cold.

Nothing at all â&amp;#x20AC;Ś he wonders how many he has left, these warm sun cold wind days, wonders how many more nauseating breaths he has resting in his down-face lungs, fermenting like the last dregs of inebriation, trickling up-longside his face around his head, loosely tied tumour-knots, stains like tea leaf blood coagulating in the bottom of the chipped neck jagged-edged beer bottle, residue of his burning acid reflux brew come creeping from his nostril and run down his upper lip to mat in a hard worked half-grown moustache â&amp;#x20AC;&amp;#x201C; usually reflected in a dust-spot-spattered mirror he sees the slug-fat dull sensation which meditates normally just behind the in between of his ever closening eyebrows. But in the dark it isnâ&amp;#x20AC;&amp;#x2122;t there, just the sound of his blood-pump-thing; thud beating metronome too loud at night, too loud at night he wonders what it might be like to lay awake and hear nothing. nothing at all

Half past hindsight I put on my green hood last night, found my old favourite glasses in a clutter-draw at the bottom of my bed. They’ve got vodka-orange frames, crisp-brown burned like the corners of grandfather’s photographs and the flecks of paint brush bristles grown long down my cheeks and round my chin. I made a call to an old favourite friend but he said I had the wrong number; I redialled it right and waited for the beep – but I didn’t leave a message, his profile picture was far too crowded by teeth and tongues. I looked out the window to find the time; could only hear rain settling on the rusty pocket watch, one slow-hand ticking round the faded face; it must have been counting midnight-seconds. I put on my old favourite glasses and went to bed to wait for sunrise, when the little grey-white rabbit would finish his whiskey and wander away contented through the fence crack at the bottom of the garden.

Hotline Fareham Tele-communications stick, ivy wrapped and tape strangled â&amp;#x20AC;&amp;#x201C; wire slung to his brown-backed brother, stands sky-right under ether-buzz of chitter-chatter natter-sounds; those ninety-nine problems of the grey and fluffy careless kind, the kind which sinks like too thick coffee in the bottom of a green-white cardboard cup â&amp;#x20AC;&amp;#x201C; listening pup-desperate for the rhythm of pink-purple-bluelight-soaring sticky rooms and bodies. Warm bodies.

Sunday after noon The pen was out of ink. It died on its ballpoint etching a revolver on the splintered face of a baseball bat. The owner finished it with an old key; the one which still had car paint under its nails; the ones who had clawed at the doors, the bodywork, until it bled scratches like stretch marks. He loaded the bat with ink and scars so later he could burn it in a bonfire on the bonnet of her car. He did this before tea time and smoked the fumes through a cigarette he rolled without tobacco. Then he went home to watch football and masturbate.

November 7th They make love to the sheets between them; candle-light is less alluring than bath water. Steam through the living room window brings birdsong out of the trees. They laid the lawn last summer, decided to shower rather than bathe: ‘Are you finished, babe?’ ‘I think so…’

Train-people shadows live more than once on dirty concrete walls; they learn to dance with the shades-of-yellow lichen and weave around the blank space between the panels of the fence. They learn without hesitation to out-step the static of train-stop seats – empty of station-people, who lost their shadows when the sun went in to hide and peer at the track’s lover, waiting curiously behind the station’s roof for something profound to happen.

Blue graffiti window: a burning body’s last attempt to see the world beyond the crematorium – blew its own heart out before its face turned ash: scattered thoughts on the train’s blistered shoulder, over-looking some small inconceivable scrawl left to smoulder in the tracks watching; body of blue graffiti window, pebble-dashed, dapple-splashed, stumbling away from the carriage’s clacking tongue.

It is strange, all you:

I think it’s you,

every day, standing at the edge of never-ending yellow line, thinking, there’ll be no tea tonight, thinking, shoes won’t walk home tonight. I don’t know you – but I see you. I get you:

It is, all strange.

Traction There is a train approaching. It is travelling towards the bridge. It is fast and carries shipping containers bound for somewhere overseas. They are heavy, hollow and shades of brown, blue, yellow. The man driving it has fallen asleep; his daughter was awake and crying, all last night something in the house was wrong, perhaps, the fridge had been unplugged. Or the hallway door was shut, but not locked. Maybe, she thought his train might never reach the end of the line. His train will never reach the end of the line.

I will be in its way.

Danny is currently studying a degree in Creative Writing at the University of Winchester. As a writer, he is most interested in poetry but also enjoys crafting the odd short story. He performs his work regularly at spoken word events in his local area, most often at the Poetry Platform in Winchester and, occasionally, at the Write a Note open-mic nights in Southampton. He also helped form and found the 5 Oâ&amp;#x20AC;&amp;#x2122;clock Club, a poetry collective based at his University, which over the last year has grown to become the second family of his day-to-day life. His poems cover a variety of themes and ideas and tend to explore the shifting warm-dark reflections of a quotidian mindfulness; his writing not only observes the world, but re-imagines how things mean and re-moulds how they behave. Although sometimes abstract and bordering on the surreal, his writing is always concreted in the reality of things and people. He sits somewhere between the Here and There, teetering on the curves of the invisible clouds which separate us when no one is looking.

Plumes is the debut poetry collection of budding poet and writer, Danny Adams. The poems included in this title were written over the last year, from January through to November. As a collection, it observes, re-views and remoulds the small things, the things that pass by unnoticed when attention spans wander, and explores them with a variety of vivid and visceral imagery, all of which are 'concreted in the reality of things' and their relationships with the people that mindlessly interact with them. Cover art, 'Loose Cannon' courtesy of Richard Vergez.