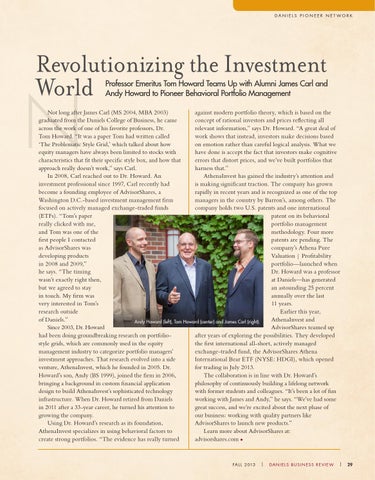 Not long after James Carl (MS 2004, MBA 2003) against modern portfolio theory, which is based on the graduated from the Daniels College of Business, he came concept of rational investors and prices reflecting all across the work of one of his favorite professors, Dr. relevant information,” says Dr. Howard. “A great deal of Tom Howard. “It was a paper Tom had written called work shows that instead, investors make decisions based ‘The Problematic Style Grid,’ which talked about how on emotion rather than careful logical analysis. What we equity managers have always been limited to stocks with have done is accept the fact that investors make cognitive characteristics that fit their specific style box, and how that errors that distort prices, and we’ve built portfolios that approach really doesn’t work,” says Carl. harness that.” In 2008, Carl reached out to Dr. Howard. An AthenaInvest has gained the industry’s attention and investment professional since 1997, Carl recently had is making significant traction. The company has grown become a founding employee of AdvisorShares, a rapidly in recent years and is recognized as one of the top Washington D.C.-based investment management firm managers in the country by Barron’s, among others. The focused on actively managed exchange-traded funds company holds two U.S. patents and one international (ETFs). “Tom’s paper patent on its behavioral really clicked with me, portfolio management and Tom was one of the methodology. Four more first people I contacted patents are pending. The as AdvisorShares was company’s Athena Pure developing products Valuation | Profitability in 2008 and 2009,” portfolio—launched when he says. “The timing Dr. Howard was a professor wasn’t exactly right then, at Daniels—has generated but we agreed to stay an astounding 25 percent in touch. My firm was annually over the last very interested in Tom’s 11 years. research outside Earlier this year, of Daniels.” AthenaInvest and Andy Howard (left), Tom Howard (center) and James Carl (right). Since 2003, Dr. Howard AdvisorShares teamed up had been doing groundbreaking research on portfolioafter years of exploring the possibilities. They developed style grids, which are commonly used in the equity the first international all-short, actively managed management industry to categorize portfolio managers’ exchange-traded fund, the AdvisorShares Athena investment approaches. That research evolved into a side International Bear ETF (NYSE: HDGI), which opened venture, AthenaInvest, which he founded in 2005. Dr. for trading in July 2013. Howard’s son, Andy (BS 1999), joined the firm in 2006, The collaboration is in line with Dr. Howard’s bringing a background in custom financial application philosophy of continuously building a lifelong network design to build AthenaInvest’s sophisticated technology with former students and colleagues. “It’s been a lot of fun infrastructure. When Dr. Howard retired from Daniels working with James and Andy,” he says. “We’ve had some in 2011 after a 33-year career, he turned his attention to great success, and we’re excited about the next phase of growing the company. our business: working with quality partners like Using Dr. Howard’s research as its foundation, AdvisorShares to launch new products.” AthenaInvest specializes in using behavioral factors to Learn more about AdvisorShares at: create strong portfolios. “The evidence has really turned advisorshares.com •

Semiannual publication from the University of Denver's Daniels College of Business 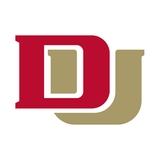