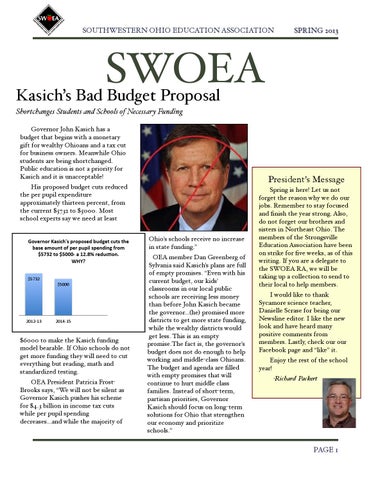 Kasich’s Bad Budget Proposal Shortchanges Students and Schools of Necessary Funding Governor John Kasich has a budget that begins with a monetary gift for wealthy Ohioans and a tax cut for business owners. Meanwhile Ohio students are being shortchanged. Public education is not a priority for Kasich and it is unacceptable!

$6000 to make the Kasich funding model bearable. If Ohio schools do not get more funding they will need to cut everything but reading, math and standardized testing. OEA President Patricia FrostBrooks says, “We will not be silent as Governor Kasich pushes his scheme for $4.3 billion in income tax cuts while per pupil spending decreases...and while the majority of

Ohio’s schools receive no increase in state funding.” OEA member Dan Greenberg of Sylvania said Kasich’s plans are full of empty promises. “Even with his current budget, our kids’ classrooms in our local public schools are receiving less money than before John Kasich became the governor...(he) promised more districts to get more state funding, while the wealthy districts would get less. This is an empty promise.The fact is, the governor’s budget does not do enough to help working and middle-class Ohioans. The budget and agenda are filled with empty promises that will continue to hurt middle class families. Instead of short-term, partisan priorities, Governor Kasich should focus on long-term solutions for Ohio that strengthen our economy and prioritize schools.”

Spring is here! Let us not forget the reason why we do our jobs. Remember to stay focused and finish the year strong. Also, do not forget our brothers and sisters in Northeast Ohio. The members of the Strongsville Education Association have been on strike for five weeks, as of this writing. If you are a delegate to the SWOEA RA, we will be taking up a collection to send to their local to help members. I would like to thank Sycamore science teacher, Danielle Scrase for being our Newsline editor. I like the new look and have heard many positive comments from members. Lastly, check our our Facebook page and “like” it. Enjoy the rest of the school year! -Richard Packert

STRONGSVILLE TEACHERS ENTER WEEK FIVE OF STRIKE simply buying time to unilaterally implement a contract at a time of their choosing.” The strike began midnight on March 4. On March 8, hundreds of SEA members, along with teachers from other districts, marched in solidarity from Center Middle School to Strongsville Commons to hear former Governor Strickland. He stressed the importance of working hard to support public education as Governor Kasich and the Republican-led state legislature expand voucher programs for parents to take their children to charter and private schools. The strike still continues some five weeks later.

The Strongsville teachers’ contract expired June 30th and the Strongsville Education Association (SEA) agreed to postpone contract negotiations until the district better understood its financial status. Negotiations began on July and both sides continued to meet twice a month, but there was no progress. So SEA oﬃcially declared impasse on January 30 and on February 15, SEA members agreed to issue its intent to strike. The SEA Webpage posted what the SEA teachers are asking for: Limits on Class Size,

When an OEA local exercises its right of collective bargaining, it also eﬀects every OEA local and its members. Monetary donations and words of support for SEA members may be sent to:

Conversion of Retirement Pick Up, and

They have also clarified the specifics of the former, as well as answered some frequently asked questions. SEA President Linscott said “The Board’s continued inability to bargain in good faith as well as their stunning decision to issue a premature Last Best Oﬀer reinforces...that this Board never intended to reach a deal, and instead was STRS UPDATE March 18th the March Board News was sent out through email. In case you missed it, it included information that Actuarial Firm Selected; the Board Adopts New STRS Ohio Mission and Vision: “to partner with our members in helping to build retirement security...to be a leading retirement system by

TECHNOLOGY IN THE COMMON CORE (CC)

Teachers no longer have the option of not using technology. Instructionally integrated technology is now required by the CC curriculum. This workshop will help teachers understand the technology instructional requirements including how to embed them into their instructional practices, even with limited resources this it can make life easier.

Educators investigate how technology is embedded in the CC standards. Attendees will explore the increased demands outlined in the CCRS and OTES. Educators will understand that technology is key to eﬀectively meeting these demands. Lesson Presented by Andrew Wheatley, the development focused on the former will Technology Integration Specialist from BCESC/Madison Schools. Light dinner and allow for rigor, engagement, and registration at 5:00pm; workshop begins at diﬀerentiation. Teachers will also reflect on learning and how best to apply it. 5:30pm at the SWOEA Oﬃce. CEU’s oﬀered. RSVP Veria by email by April 12th. Presented by Andrew Wheatley. Sign up and pay $50 by April 16th (cost after is April 18th, 2013 $100). Breakfast, and lunch included; MAPPING OUR TEARS: An Introduction workshop from 8:30am-4:00pm at the and Tour of the Center for Holocaust and Kings Education Center. CEU’s and Humanity Education’s (CHHE) Exhibit To commemorate the 65th anniversary of Ashland credit oﬀered. RSVP Veria by email. Any questions email Marti Huss or Israel’s founding, experience an Jorge Gonzalez. introduction and tour of the CHHE Exhibit Mapping Our Tears. They educate about the Holocaust to remember its victims and act on its lessons. Through innovative programs and partnerships, they challenge injustice, inhumanity and prejudice, and foster understanding, inclusion and engaged citizenship. Free to SWOEA members; $15 for nonmembers. Light kosher meal (non-kosher food not allowed on site) and sign-in at 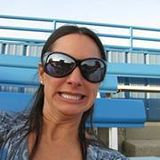