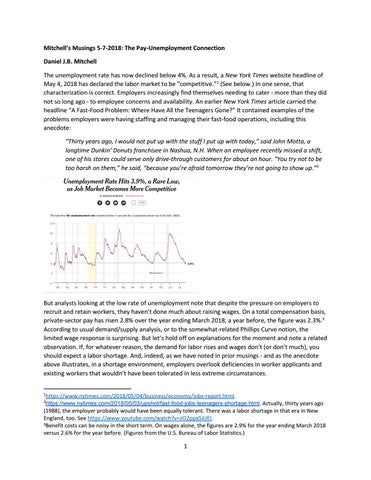 Mitchell’s Musings 5-7-2018: The Pay-Unemployment Connection Daniel J.B. Mitchell The unemployment rate has now declined below 4%. As a result, a New York Times website headline of May 4, 2018 has declared the labor market to be “competitive.”1 (See below.) In one sense, that characterization is correct. Employers increasingly find themselves needing to cater - more than they did not so long ago - to employee concerns and availability. An earlier New York Times article carried the headline “A Fast-Food Problem: Where Have All the Teenagers Gone?” It contained examples of the problems employers were having staffing and managing their fast-food operations, including this anecdote: “Thirty years ago, I would not put up with the stuff I put up with today,” said John Motta, a longtime Dunkin’ Donuts franchisee in Nashua, N.H. When an employee recently missed a shift, one of his stores could serve only drive-through customers for about an hour. “You try not to be too harsh on them,” he said, “because you’re afraid tomorrow they’re not going to show up.”2

But analysts looking at the low rate of unemployment note that despite the pressure on employers to recruit and retain workers, they haven’t done much about raising wages. On a total compensation basis, private-sector pay has risen 2.8% over the year ending March 2018; a year before, the figure was 2.3%.3 According to usual demand/supply analysis, or to the somewhat-related Phillips Curve notion, the limited wage response is surprising. But let’s hold off on explanations for the moment and note a related observation. If, for whatever reason, the demand for labor rises and wages don’t (or don’t much), you should expect a labor shortage. And, indeed, as we have noted in prior musings - and as the anecdote above illustrates, in a shortage environment, employers overlook deficiencies in worker applicants and existing workers that wouldn’t have been tolerated in less extreme circumstances. 1

https://www.nytimes.com/2018/05/04/business/economy/jobs-report.html. https://www.nytimes.com/2018/05/03/upshot/fast-food-jobs-teenagers-shortage.html. Actually, thirty years ago (1988), the employer probably would have been equally tolerant. There was a labor shortage in that era in New England, too. See https://www.youtube.com/watch?v=zO2ppa5iUEI. 3 Benefit costs can be noisy in the short term. On wages alone, the figures are 2.9% for the year ending March 2018 versus 2.6% for the year before. (Figures from the U.S. Bureau of Labor Statistics.) 2

As noted, the Times’ headline describes current conditions as becoming “more competitive.” You might want to argue with that description, since if wages are not going up (or not going up much) it appears the competition is being confined to non-wage aspects of employment. And if employers are collectively limiting their behavior, that sounds like non-competition.

Back in the 1980s, economist Martin Weitzman proposed incentives for profit-sharing plans, plans which had the effect of making and keeping the marginal cost of labor, thus provoking a labor shortage with the result that the economy had an automatic tendency toward full employment.4 We need not get into the technical details here, but with profit sharing, even though the marginal cost of labor was kept low, workers also got their profit-share payments. There were aspects of the Weitzman proposal that were similar to employer monopsony situations – which also produce de facto labor shortages (but which don’t involve giving workers an added share). The classic examples of monopsony, e.g., coal mining company towns with a single employer, are relatively rare. However, as Chris Erickson and I pointed out in the 2000s before the Great Recession, actual and ordinary labor markets have information barriers. Workers have to search for jobs and firms have to search for workers. These search requirements produce monopsonistic characteristics that don’t require company towns and the like.5 (But as in the company town story, workers don’t get a share payment.) There seems to be a revival of interest in labor-market monopsony of late. But you don’t have to search far for an explanation of why contemporary wage response to increased labor demand is sluggish. The one universal constant when it comes to how employers set wages is that, in one form or another, they look to see what other employers in the relevant area, industry, or occupational group are doing on pay. If everyone is looking at everyone, there is a momentum of the status quo that is resistant to change. Add to this general observation the fact that the recovery from the Great Recession was slow so that labor markets were soft for a long time, and the fact that private-sector unions are a shadow of their former selves, and you get a kind of employer collusion on pay. I don’t raise pay unless you do. You

donâ&#x20AC;&#x2122;t raise pay unless I do. The bottom line here is that the low unemployment rate and the limited movement in pay are connected. The latter helps explain the former. 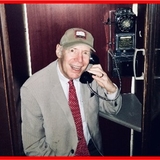