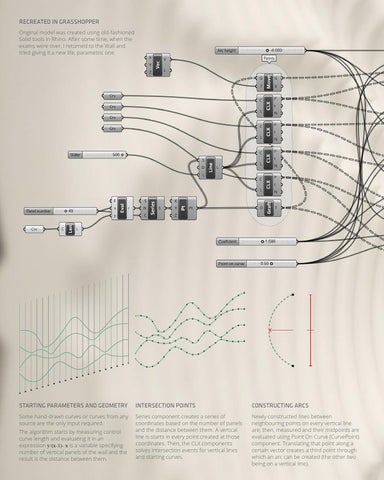 RECREATED IN GRASSHOPPER Original model was created using old-fashioned Solid tools in Rhino. After some time, when the exams were over, I returned to the Wall and tried giving it a new life, parametric one.

Some hand-drawn curves or curves from any source are the only input required.

Series component creates a series of coordinates based on the number of panels and the distance between them. A vertical line is starts in every point created at those coordinates. Then, the CLX components solves intersection events for vertical lines and starting curves.

Newly constructed lines between neighbouring points on every vertical line are, then, measured and their midpoints are evaluated using Point On Curve (CurvePoint) component. Translating that point along a certain vector creates a third point through which an arc can be created (the other two being on a vertical line).

The algorithm starts by measuring control curve length and evaluating it in an expression y/(x-1)- x is a variable specifying number of vertical panels of the wall and the result is the distance between them. 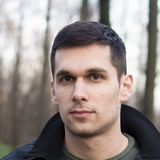