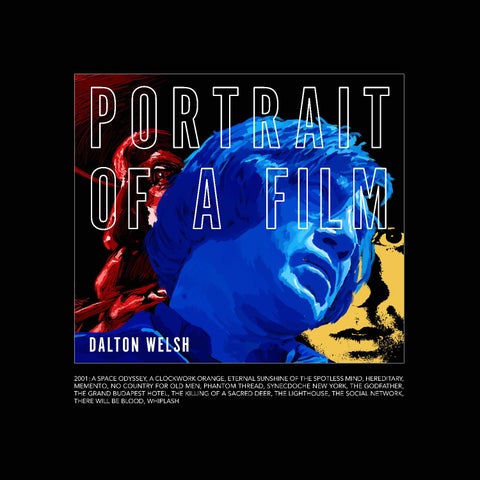 2001: A SPACE ODYSSEY, A CLOCKWORK ORANGE, ETERNAL SUNSHINE OF THE SPOTLESS MIND, HEREDITARY, MEMENTO, NO COUNTRY FOR OLD MEN, PHANTOM THREAD, SYNECDOCHE NEW YORK, THE GODFATHER, THE GRAND BUDAPEST HOTEL, THE KILLING OF A SACRED DEER, THE LIGHTHOUSE, THE SOCIAL NETWORK, THERE WILL BE BLOOD, WHIPLASH

‘PORTRAIT OF A FILM’ consists of a collection of 15 digitially illustrated portraits of characters from some of my favourite films. Each portrait hoping to represent the colours, aesthetic, genre and story of their respective movie counterparts. Complete with an accompanying quote for each of the films.

ETERNAL SUNSHINE OF THE SPOTLESS MIND

NO COUNTRY FOR OLD MEN

THE KILLING OF A SACRED DEER

THERE WILL BE BLOOD

Director - Stanley Kubrick Cast - Keir Dullea, Gary Lockwood, William Sylvester, Douglas Rain After discovering a mysterious artifact buried beneath the Lunar surface, mankind sets off on a quest to find its origins with help from intelligent supercomputer H.A.L. 9000. â&#x20AC;&#x153;Dave, although you took very thorough precautions in the pod against my hearing you, I could see your lips move... this conversation can serve no purpose anymore. Goodbye.â&#x20AC;?

Director - Stanley Kubrick Cast - Malcom McDowell, Patrick Magee, Michael Bates, Warren Clarke Alex, a psychopathic delinquent, is imprisoned for murder and rape. In order to reduce his sentence, he volunteers for an experimental therapy conducted by the government, but it goes askew. â&#x20AC;&#x153;How art thou, thou globby bottle of cheap stinking chip oil? Come and get one in the yarbles, if ya have any yarbles, you eunuch jelly thou!â&#x20AC;?

ETERNAL SUNSHINE OF THE SPOTLESS MIND (2004)

Director - Michel Gondry Cast - Jim Carrey, Kate Winslet, Mark Ruffalo, Elijah Wood, Kirsten Dunst Joel and Clementine begin a relationship post a train journey together, unaware that they had previously been in a relationship, the memories of which were clinically erased. “How happy is the blameless vestal’s lot. The world forgetting, by the world forgot. Eternal sunshine of the spotless mind. Each pray’r accepted, and each wish resign’d”

Director - Ari Aster Cast - Toni Collette, Milly Shapiro, Gabriel Byrne, Alex Wolff When the matriarch of the Graham family passes away, her daughter and grandchildren begin to unravel cryptic and increasingly terrifying secrets about their ancestry, trying to outrun the sinister fate they have inherited. “Don’t you swear at me, Don’t you ever raise your voice at me! I am your mother! You understand? All I do is worry and slave and defend you, and all I get back is that face on your face! so full of disdain and resentment and always so annoyed!”

Director - Christopher Nolan Cast - Guy Pearce, Carrie-Anne Moss, Joe Pantoliano, Stephen Tobolowsky Leonard Shelby, an insurance investigator, suffers from anterograde amnesia and uses notes and tattoos to hunt for the man he thinks killed his wife, which is the last thing he remembers. “Memory can change the shape of a room; it can change the colour of a car. And memories can be distorted. They’re just an interpretation, they’re not a record, and they’re irrelevant if you have the facts.”

Director - Joel and Ethan Coen Cast - Javier Bardem, Josh Brolin, Tommy Lee Jones, Woody Harrelson Violence and mayhem ensue after a hunter stumbles upon a drug deal gone wrong and more than two million dollars in cash near the Rio Grande. “So this is what I’ll offer, you bring me the money and I’ll let her go. Otherwise she’s accountable same as you. That’s the best deal you’re gonna get. I won’t tell you you can save yourself, because you can’t”

Director - Paul Thomas Anderson Cast - Daniel Day Lewis, Vicky Krieps, Lesley Manville, Julie Vollono Reynolds Woodcock is a celebrated dress designer whose meticulous lifestyle undergoes a drastic change when he falls for Alma, a waitress who later becomes his muse and lover. “As I think you know, Alma, I prefer my asparagus with oil and salt. And knowing this, you’ve prepared the asparagus with butter. Now, I can imagine in certain circumstances being able to pretend that I like it made this way. Right now, I’m just admiring my own gallantry for eating it the way you’ve prepared it”

Director - Charlie Kaufman Cast - Philip Seymour Hoffman, Samantha Morton, Michelle Williams, Catherine Keener A theatre director struggles with his work, and the women in his life, as he creates a life-size replica of New York City inside a warehouse as part of his new play. “Everything is more complicated than you think. You only see a tenth of what is true. There are a million little strings attached to every choice you make; you can destroy your life every time you choose. But maybe yu won’t know for twenty years. And you may never ever trace it to its source.”

Director - Francis Ford Coppola Cast - Marlon Brando, Al Pacino, James Caan, Robert Duvall The aging patriarch of an organized crime dynasty transfers control of his clandestine empire to his reluctant son. “Some day, and that day may never come, I will call upon you to do a service for me. But until that day, consider this justice a gift on my daughter’s wedding day.”

Director - Wes Anderson Cast - Ralph Fiennes, F. Murray Abraham, Tony Revolori, Adrien Brody, Willem Dafoe A writer encounters the owner of an aging high-class hotel, who tells him of his early years serving as a lobby boy in the hotel’s glorious years under an exceptional concierge. “You’re looking so well darling you really are... they’ve done a marvelous job. I don’t know what sort of cream they’ve put on you down at the morgue but I want some”

Director - Yorgos Lanthimos Cast - Colin Farrell, Nicole Kidman, Barry Keoghan, Sunny Suljic, Raffey Cassidy Steven, a charismatic surgeon, is forced to make an unthinkable sacrifice after his life starts to fall apart, when the behavior of a teenage boy he has taken under his wing turns sinister. “If you don’t stop playing games, I will shave your head and make you eat your hair. I mean it. I will make you eat your hair”

Director - David Fincher Cast - Jesse Eisenberg, Andrew Garfield, Justin Timberlake, Armie Hammer As Harvard student Mark Zuckerberg creates the social networking site that would become known as Facebook, he is sued by the twins who claimed he stole their idea, and by the co-founder who was later squeezed out of the business. “I didn’t use any of their code, I promise. I didn’t use anything! Look, a guy who builds a nice chair doesn’t owe money to everyone who has ever built a chair, okay? They came to me with an idea, I had a better one”

Director - Paul Thomas Anderson Cast - Daniel Day Lewis, Paul Dano, Ciaran Hinds, Paul F. Tompkins A story of family, religion, hatred, and madness, Daniel Plainview is a ruthless oil prospector who goes on a relentless pursuit to become the most powerful oil tycoon. “Eli, you boy. Drained dry. I’m so sorry. Here, if you have a milkshake, and I have a milkshake, and I have a straw. There it is that’s a straw you see? Watch it. Now my straw reaches acroooos the room and starts to drink your milkshake. I... drink... your... milkshake!... I drink it up!”

Director - Damien Chazelle Cast - Miles Teller, J.K. Simmons, Melissa Benoist, Paul Reiser A promising young drummer enrolls at a cut-throat music conservatory where his dreams of greatness are mentored by an instructor who will stop at nothing to realize a student’s potential. “Truth is, I don’t think people... understood what it was I was doing at Shaffer. I wasn’t there to conduct. Any moron can wave his arms and keep people in tempo. I was there to push people beyond what’s expected of them. I believe that is an absolute necessity.” 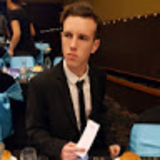 Portrait of a Film

‘PORTRAIT OF A FILM’ consists of a collection of 15 digitally illustrated portraits of characters from some of my favourite films. Each port...

Portrait of a Film

‘PORTRAIT OF A FILM’ consists of a collection of 15 digitally illustrated portraits of characters from some of my favourite films. Each port...