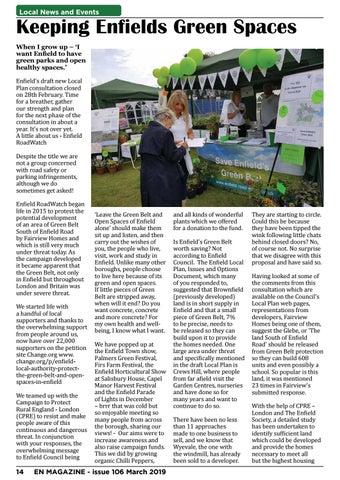 Keeping Enfields Green Spaces When I grow up – ‘I want Enfield to have green parks and open healthy spaces.’ Enfield’s draft new Local Plan consultation closed on 28th February. Time for a breather, gather our strength and plan for the next phase of the consultation in about a year. It’s not over yet. A little about us - Enfield RoadWatch Despite the title we are not a group concerned with road safety or parking infringements, although we do sometimes get asked!

Enfield RoadWatch began life in 2015 to protest the potential development of an area of Green Belt South of Enfield Road by Fairview Homes and which is still very much under threat today. As the campaign developed it became apparent that the Green Belt, not only in Enfield but throughout London and Britain was under severe threat.

We started life with a handful of local supporters and thanks to the overwhelming support from people around us, now have over 22,000 supporters on the petition site Change.org www. change.org/p/enfieldlocal-authority-protectthe-green-belt-and-openspaces-in-enfield We teamed up with the Campaign to Protect Rural England - London (CPRE) to resist and make people aware of this continuous and dangerous threat. In conjunction with your responses, the overwhelming message to Enfield Council being

‘Leave the Green Belt and Open Spaces of Enfield alone’ should make them sit up and listen, and then carry out the wishes of you, the people who live, visit, work and study in Enfield. Unlike many other boroughs, people choose to live here because of its green and open spaces. If little pieces of Green Belt are stripped away, when will it end? Do you want concrete, concrete and more concrete? For my own health and wellbeing, I know what I want.

We have popped up at the Enfield Town show, Palmers Green Festival, Firs Farm Festival, the Enfield Horticultural Show at Salisbury House, Capel Manor Harvest Festival and the Enfield Parade of Lights in December – brrr that was cold but so enjoyable meeting so many people from across the borough, sharing our views! - Our aims were to increase awareness and also raise campaign funds. This we did by growing organic Chilli Peppers,

and all kinds of wonderful plants which we offered for a donation to the fund.

Is Enfield’s Green Belt worth saving? Not according to Enfield Council. The Enfield Local Plan, Issues and Options Document, which many of you responded to, suggested that Brownfield (previously developed) land is in short supply in Enfield and that a small piece of Green Belt, 7% to be precise, needs to be released so they can build upon it to provide the homes needed. One large area under threat and specifically mentioned in the draft Local Plan is Crews Hill, where people from far afield visit the Garden Centres, nurseries and have done so for many years and want to continue to do so. There have been no less than 11 approaches made to one business to sell, and we know that Wyevale, the one with the windmill, has already been sold to a developer.

They are starting to circle. Could this be because they have been tipped the wink following little chats behind closed doors? No, of course not. No surprise that we disagree with this proposal and have said so.

Having looked at some of the comments from this consultation which are available on the Council’s Local Plan web pages, representations from developers, Fairview Homes being one of them, suggest the Glebe, or ‘The land South of Enfield Road’ should be released from Green Belt protection so they can build 608 units and even possibly a school. So popular is this land, it was mentioned 23 times in Fairview’s submitted response. With the help of CPRE – London and The Enfield Society, a detailed study has been undertaken to identify sufficient land which could be developed and provide the homes necessary to meet all but the highest housing the local magazine for pep living and working in Enfield Potters Bar and Cuffley with local new and more engaging editorial.

the local magazine for pep living and working in Enfield Potters Bar and Cuffley with local new and more engaging editorial.