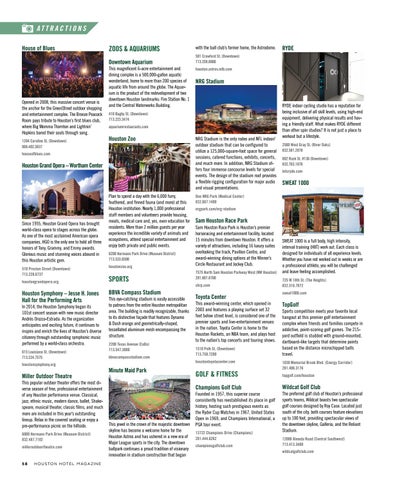 Opened in 2008, this massive concert venue is the anchor for the GreenStreet outdoor shopping and entertainment complex. The Bronze Peacock Room pays tribute to Houston’s first blues club, where Big Momma Thornton and Lightnin’ Hopkins bared their souls through song. 1204 Caroline St. (Downtown) 888.402.5837

This magnificent 6-acre entertainment and dining complex is a 500,000-gallon aquatic wonderland, home to more than 200 species of aquatic life from around the globe. The Aquarium is the product of the redevelopment of two downtown Houston landmarks: Fire Station No. 1 and the Central Waterworks Building.

Plan to spend a day with the 6,000 furry, feathered, and finned fauna (and more) at this Houston institution. Nearly 1,000 professional staff members and volunteers provide housing, meals, medical care and, yes, even education for residents. More than 2 million guests per year experience the incredible variety of animals and ecosystems, attend special entertainment and enjoy both private and public events. 6200 Hermann Park Drive (Museum District) 713.533.6500 houstonzoo.org

NRG Stadium is the only rodeo and NFL indoor/ outdoor stadium that can be configured to utilize a 125,000-square-foot space for general sessions, catered functions, exhibits, concerts, and much more. In addition, NRG Stadium offers four immense concourse levels for special events. The design of the stadium roof provides a flexible rigging configuration for major audio and visual presentations.

RYDE indoor cycling studio has a reputation for being inclusive of all skill levels, using high-end equipment, delivering physical results and having a friendly staff. What makes RYDE different than other spin studios? It is not just a place to workout but a lifestyle. 2500 West Gray St. (River Oaks) 832.581.2878 802 Rusk St. #136 (Downtown) 832.703.1876 letsryde.com

Toyota Center This award-winning center, which opened in 2003 and features a playing surface set 32 feet below street level, is considered one of the premier sports and live-entertainment venues in the nation. Toyota Center is home to the Houston Rockets, an NBA team, and plays host to the nation’s top concerts and touring shows. 1510 Polk St. (Downtown) 713.758.7200 houstontoyotacenter.com

This jewel in the crown of the majestic downtown skyline has become a welcome home for the Houston Astros and has ushered in a new era of Major League sports in the city. The downtown ballpark continues a proud tradition of visionary innovation in stadium construction that began

Since 1955, Houston Grand Opera has brought world-class opera to stages across the globe. As one of the most acclaimed American opera companies, HGO is the only one to hold all three honors of Tony, Grammy, and Emmy awards. Glorious music and stunning voices abound in this Houston artistic gem.

with the ball club’s former home, the Astrodome.

Founded in 1957, this superior course consistently has reestablished its place in golf history, hosting such prestigious events as the Ryder Cup Matches in 1967, United States Open in 1969, and Champions International, a PGA tour event. 13722 Champions Drive (Champions) 281.444.6262 championsgolfclub.com

SWEAT 1000 is a full body, high intensity, interval training (HIIT) work out. Each class is designed for individuals of all experience levels. Whether you have not worked out in weeks or are a professional athlete, you will be challenged and leave feeling accomplished. 725 W 18th St. (The Heights) 832.516.7072 sweat1000.com