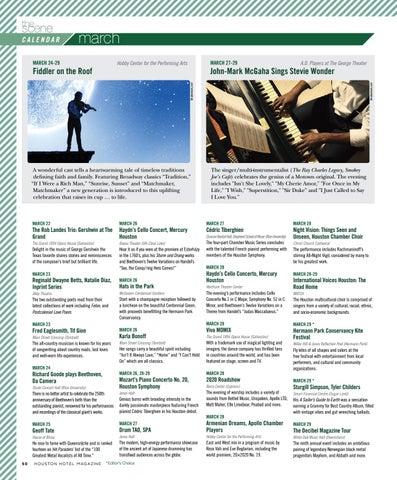 Fiddler on the Roof

A.D. Players at The George Theater

A wonderful cast tells a heartwarming tale of timeless traditions defining faith and family. Featuring Broadway classics “Tradition,” “If I Were a Rich Man,” “Sunrise, Sunset” and “Matchmaker, Matchmaker” a new generation is introduced to this uplifting celebration that raises its cup … to life.

The Rob Landes Trio: Gershwin at The Grand

Delight in the music of George Gershwin the Texas favorite shares stories and reminiscences of the composer’s brief but brilliant life.

Hear it as if you were at the premiere at Esterházy in the 1760’s, plus his Sturm und Drang works and Beethoven’s Twelve Variations on Handel’s “See, the Conqu’ring Hero Comes!”

The two outstanding poets read from their latest collections of work including Felon, and Postcolonial Love Poem.

Start with a champagne reception followed by a luncheon on the beautiful Centennial Green, with proceeds benefitting the Hermann Park Conservancy.

The singer/multi-instrumentalist (The Ray Charles Legacy, Smokey Joe's Cafe) celebrates the genius of a Motown original. The evening includes "Isn't She Lovely," "My Cherie Amor," "For Once in My Life," "I Wish," "Superstition," "Sir Duke” and "I Just Called to Say I Love You.”

The four-part Chamber Music Series concludes with the talented French pianist performing with members of the Houston Symphony. MARCH 28

The evening’s performance includes Cello Concerto No.1 in C Major, Symphony No. 52 in C Minor, and Beethoven’s Twelve Variations on a Theme from Handel’s “Judas Maccabaeus.” MARCH 28

The alt-country musician is known for his years of songwriting about country roads, lost loves and well-worn life experiences. MARCH 24

Her songs carry a beautiful spirit including “Isn’t It Always Love,” “Home” and “I Can’t Hold On” which are all classics.

With a trademark use of magical lighting and imagery, the dance company has thrilled fans in countries around the world, and has been featured on stage, screen and TV.

The performance includes Rachmaninoff’s stirring All-Night Vigil, considered by many to be his greatest work. MARCH 28-29

The Houston multicultural choir is comprised of singers from a variety of cultural, racial, ethnic, and socio-economic backgrounds. MARCH 29 *

Fly kites of all shapes and colors at the free festival with entertainment from local performers, and cultural and community organizations. MARCH 29 *

There is no better artist to celebrate the 250th anniversary of Beethoven’s birth than the outstanding pianist, renowned for his performances and recordings of the classical giant’s works.

The modern, high-energy performance showcase of the ancient art of Japanese drumming has transfixed audiences across the globe.

East and West mix in a program of music by Reza Vali and Eve Beglarian, including the world premiere, 20×2020 No. 19.

Geoff Tate He rose to fame with Queensrÿche and is ranked fourteen on Hit Paraders’ list of the “100 Greatest Metal Vocalists of All Time.” 50

His A Sailor’s Guide to Earth was a sensation earning a Grammy for Best Country Album, filled with vintage vibes and gut wrenching ballads.