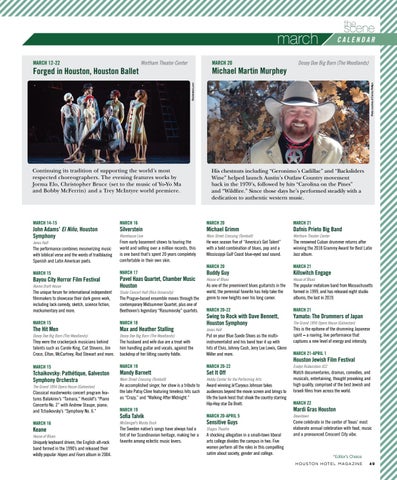 Continuing its tradition of supporting the world’s most respected choreographers. The evening features works by Jorma Elo, Christopher Bruce (set to the music of Yo-Yo Ma and Bobby McFerrin) and a Trey McIntyre world premiere.

His chestnuts including “Geronimo’s Cadillac” and “Backsliders Wine” helped launch Austin’s Outlaw Country movement back in the 1970’s, followed by hits “Carolina on the Pines” and “Wildfire.” Since those days he’s performed steadily with a dedication to authentic western music.

The performance combines mesmerizing music with biblical verse and the words of trailblazing Spanish and Latin American poets.

From early basement shows to touring the world and selling over a million records, this is one band that’s spent 20 years completely comfortable in their own skin.

He won season five of “America’s Got Talent” with a bold combination of blues, pop and a Mississippi Gulf Coast blue-eyed soul sound.

As one of the preeminent blues guitarists in the world, the perennial favorite has help take the genre to new heights over his long career.

The popular metalcore band from Massachusetts formed in 1999, and has released eight studio albums, the last in 2019.

The Prague-based ensemble moves through the contemporary Midsummer Quartet, plus one of Beethoven’s legendary “Rasumovsky” quartets.

They were the crackerjack musicians behind talents such as Carole King, Cat Stevens, Jim Croce, Elton, McCartney, Rod Stewart and more.

The husband and wife duo are a treat with him handling guitar and vocals, against the backdrop of her lilting country fiddle.

Put on your Blue Suede Shoes as the multiinstrumentalist and his band tear it up with hits of Elvis, Johnny Cash, Jerry Lee Lewis, Glenn Miller and more.

An accomplished singer, her show is a tribute to the late Patsy Cline featuring timeless hits such as “Crazy,” and “Walking After Midnight.”

Uniquely keyboard driven, the English alt-rock band formed in the 1990’s and released their wildly popular Hopes and Fears album in 2004.

The Sweden native’s songs have always had a tint of her Scandinavian heritage, making her a favorite among eclectic music lovers.

A shocking allegation in a small-town liberal arts college divides the campus in two. Five women perform all the roles in this compelling satire about society, gender and college.

Yamato: The Drummers of Japan The Grand 1894 Opera House (Galveston)

This is the epitome of the drumming Japanese spirit – a roaring, live performance that captures a new level of energy and intensity. MARCH 21-APRIL 1

Watch documentaries, dramas, comedies, and musicals, entertaining, thought provoking and high quality, comprised of the best Jewish and Israeli films from across the world. MARCH 22

Come celebrate in the center of Texas’ most elaborate annual celebration with food, music and a pronounced Crescent City vibe.