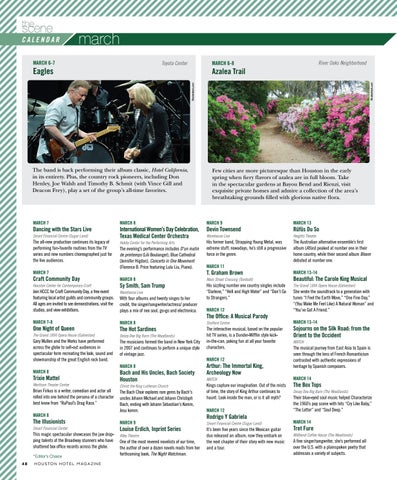 The band is back performing their album classic, Hotel California, in its entirety. Plus, the country rock pioneers, including Don Henley, Joe Walsh and Timothy B. Schmit (with Vince Gill and Deacon Frey), play a set of the group’s all-time favorites.

The all-new production continues its legacy of performing fan-favorite routines from the TV series and new numbers choreographed just for the live audiences. MARCH 7

One Night of Queen The Grand 1894 Opera House (Galveston)

Gary Mullen and the Works have performed across the globe to sell-out audiences in spectacular form recreating the look, sound and showmanship of the great English rock band. MARCH 8

Brian Firkus is a writer, comedian and actor all rolled into one behind the persona of a character best know from “RuPaul’s Drag Race.” MARCH 8

This magic spectacular showcases the jaw dropping talents of the Broadway stunners who have shattered box office records across the globe. *Editor’s Choice 48

With four albums and twenty singes to her credit, the singer/songwriter/actress/ producer plays a mix of neo soul, go-go and electronica. MARCH 8

The musicians formed the band in New York City in 2007 and continues to perform a unique style of vintage jazz. MARCH 8

One of the most revered novelists of our time, the author of over a dozen novels reads from her forthcoming book, The Night Watchman.

Few cities are more picturesque than Houston in the early spring when fiery flavors of azalea are in full bloom. Take in the spectacular gardens at Bayou Bend and Rienzi, visit exquisite private homes and admire a collection of the area’s breathtaking grounds filled with glorious native flora.

The Australian alternative ensemble’s first album (Atlas) peaked at number one in their home country, while their second album Bloom debuted at number one.

His sizzling number one country singles include “Darlene,” “Hell and High Water” and “Don’t Go to Strangers.”

She wrote the soundtrack to a generation with tunes “I Feel the Earth Move,” “One Fine Day,” “(You Make Me Feel Like) A Natural Woman” and “You’ve Got A Friend.”

The Office: A Musical Parody The interactive musical, based on the popular hit TV series, is a Dunder-Mifflin style kickin-the-can, poking fun at all your favorite characters. MARCH 12

Sojourns on the Silk Road: from the Orient to the Occident MATCH

The musical journey from East Asia to Spain is seen through the lens of French Romanticism contrasted with authentic expressions of heritage by Spanish composers.

Kings capture our imagination. Out of the mists of time, the story of King Arthur continues to haunt. Look inside the man, or is it all myth?

Their blue-eyed soul music helped Characterize the 1960’s pop scene with hits “Cry Like Baby,” “The Letter” and “Soul Deep.”

Rodrigo Y Gabriela It’s been five years since the Mexican guitar duo released an album; now they embark on the next chapter of their story with new music and a tour.

A fine singer/songwriter, she’s performed all over the U.S. with a plainspoken poetry that addresses a variety of subjects.