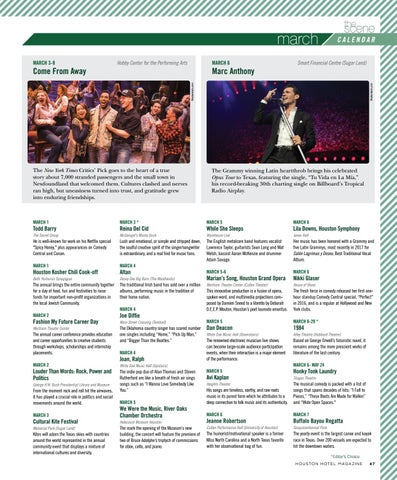 The New York Times Critics’ Pick goes to the heart of a true story about 7,000 stranded passengers and the small town in Newfoundland that welcomed them. Cultures clashed and nerves ran high, but uneasiness turned into trust, and gratitude grew into enduring friendships.

He is well-known for work on his Netflix special "Spicy Honey," plus appearances on Comedy Central and Conan.

Lush and emotional, or simple and stripped down, the soulful creative spirit of the singer/songwriter is extraordinary, and a real find for music fans.

Her music has been honored with a Grammy and five Latin Grammys, most recently in 2017 for Salón Lágrimas y Deseo, Best Traditional Vocal Album.

The annual brings the entire community together for a day of food, fun and festivities to raise funds for important non-profit organizations in the local Jewish Community.

The traditional Irish band has sold over a million albums, performing music in the tradition of their home nation.

This innovative production is a fusion of opera, spoken word, and multimedia projections composed by Damien Sneed to a libretto by Deborah D.E.E.P. Mouton, Houston’s poet laureate emeritus.

The fresh force in comedy released her first onehour standup Comedy Central special, “Perfect” in 2016, and is a regular at Hollywood and New York clubs.

The Oklahoma country singer has scored number one singles including “Home,” “Pick Up Man,” and “Bigger Than the Beatles.”

The renowned electronic musician live shows can become large-scale audience participation events, when their interaction is a major element of the performance.

Based on George Orwell’s futuristic novel, it remains among the more prescient works of literature of the last century.

From the moment rock and roll hit the airwaves, it has played a crucial role in politics and social movements around the world. MARCH 3

Kites will adorn the Texas skies with countries around the world represented in the annual community event that displays a mixture of international cultures and diversity.

The indie pop duo of Alan Thomas and Steven Rutherford are like a breath of fresh air sings songs such as “I Wanna Love Somebody Like You.” MARCH 5

The mark the opening of the Museum’s new building, the concert will feature the premiere of two of Bruce Adolphe’s triptych of commissions for oboe, cello, and piano.

His songs are timeless, earthy, and raw roots music in its purest form which he attributes to a deep connection to folk music and its authenticity.

The musical comedy is packed with a list of songs that spans decades of hits: “I Fall to Pieces,” “These Boots Are Made for Walkin” and “Wide Open Spaces."

The humorist/motivational speaker is a former Miss North Carolina and a North Texas favorite with her observational bag of fun.

The yearly event is the largest canoe and kayak race in Texas. Over 200 vessels are expected to hit the downtown waters.