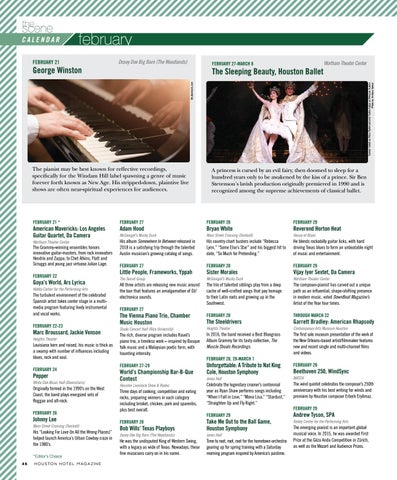 The pianist may be best known for reflective recordings, specifically for the Windam Hill label spawning a genre of music forever forth known as New Age. His stripped-down, plaintive live shows are often near-spiritual experiences for audiences.

Louisiana born and raised, his music is thick as a swamp with number of influences including blues, rock and soul. FEBRUARY 24

Originally formed in the 1990’s on the West Coast, the band plays energized sets of Reggae and alt-rock. FEBRUARY 26

His “Looking For Love (In All the Wrong Places)” helped launch America’s Urban Cowboy craze in the 1980’s. *Editor’s Choice 46

A princess is cursed by an evil fairy, then doomed to sleep for a hundred years only to be awakened by the kiss of a prince. Sir Ben Stevenson’s lavish production originally premiered in 1990 and is recognized among the supreme achievements of classical ballet.

His album Somewhere In Between released in 2018 is a satisfying trip through the talented Austin musician’s growing catalog of songs.

His country chart busters include “Rebecca Lynn,” “Some Else’s Star” and his biggest hit to date, “So Much for Pretending.”

He blends rockabilly guitar licks, with hard driving Texas blues to form an unbeatable night of music and entertainment.

All three artists are releasing new music around the tour that features an amalgamation of DJ/ electronica sounds.

The trio of talented siblings play from a deep cache of well-crafted songs that pay homage to their Latin roots and growing up in the Southwest.

The composer-pianist has carved out a unique path as an influential, shape-shifting presence in modern music, voted DownBeat Magazine’s Artist of the Year four times.

In 2016, the band received a Best Bluegrass Album Grammy for its tasty collection, The Muscle Shoals Recordings.

The first solo museum presentation of the work of the New Orleans-based artist/filmmaker features new and recent single and multi-channel films and videos.

Three days of cooking, competition and eating rocks, preparing winners in each category including brisket, chicken, pork and spareribs, plus best overall.

Celebrate the legendary crooner’s centennial year as Ryan Shaw performs songs including “When I Fall in Love,” “Mona Lisa,” “Stardust,” “Straighten Up and Fly Right.”

The wind quintet celebrates the composer’s 250th anniversary with his best writing for winds and premiere by Houston composer Erberk Eryilmaz.

Take Me Out to the Ball Game, Houston Symphony

He was the undisputed King of Western Swing, with a legacy as wide of Texas. Nowadays, these fine musicians carry on in his name.

Time to root, root, root for the hometown orchestra gearing up for spring training with a Saturday morning program inspired by America’s pastime.

The emerging pianist is an important global musical voice. In 2015, he was awarded First Prize at the Géza Anda Competition in Zürich, as well as the Mozart and Audience Prizes.