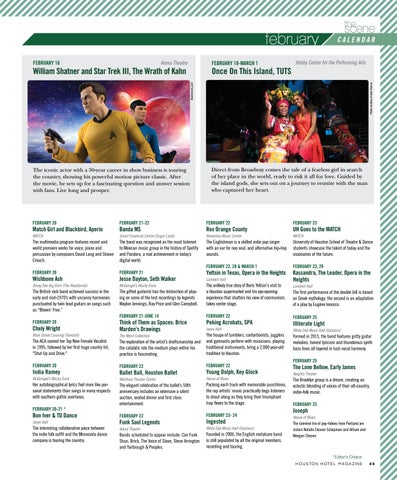 William Shatner and Star Trek III, The Wrath of Kahn

Once On This Island, TUTS shutterstock.com

The iconic actor with a 50-year career in show business is touring the country, showing his powerful motion picture classic. After the movie, he sets up for a fascinating question and answer session with fans. Live long and prosper.

Direct from Broadway comes the tale of a fearless girl in search of her place in the world, ready to risk it all for love. Guided by the island gods, she sets out on a journey to reunite with the man who captured her heart.

The band was recognized as the most listened to Mexican music group in the history of Spotify and Pandora, a real achievement in today’s digital world.

The Englishman is a skilled indie pop singer with an ear for neo soul, and alternative hip-hop sounds.

University of Houston School of Theatre & Dance students showcase the talent of today and the visionaries of the future.

Yeltsin in Texas, Opera in the Heights Lambert Hall

The British rock band achieved success in the early and mid-1970’s with uncanny harmonies punctuated by twin lead guitars on songs such as “Blowin’ Free.”

The gifted guitarist has the distinction of playing on some of the last recordings by legends Waylon Jennings, Ray Price and Glen Campbell.

The unlikely true story of Boris Yeltsin's visit to a Houston supermarket and his eye-opening experience that shatters his view of communism, takes center stage.

The ACA named her Top New Female Vocalist in 1995, followed by her first huge country hit, "Shut Up and Drive." FEBRUARY 20

Her autobiographical lyrics feel more like personal statements than songs in many respects with southern gothic overtones. FEBRUARY 20-21 *

The interesting collaborative piece between the indie folk outfit and the Minnesota dance company is touring the country.

Think of Them as Spaces: Brice Marden's Drawings

The exploration of the artist’s draftsmanship and the catalytic role the medium plays within his practice is fascinating.

The troupe of tumblers, contortionists, jugglers and gymnasts perform with musicians, playing traditional instruments, bring a 2,000 year-old tradition to Houston.

The elegant celebration of the ballet’s 50th anniversary includes an extensive a silent auction, seated dinner and first class entertainment.

Packing each track with memorable punchlines, the rap artists’ music practically begs listeners to shout along as they bring their triumphant trap flexes to the stage.

Founded in 2006, the English metalcore band is still populated by all the original members, recording and touring.

UH Goes to the MATCH

Kassandra, The Leader, Opera in the Heights Lambert Hall

The first performance of the double bill is based on Greek mythology; the second is an adaptation of a play by Eugène Ionesco. FEBRUARY 25

The Brooklyn group is a dream, creating an eclectic blending of voices of their alt-country, indie-folk music. FEBRUARY 25

House of Blues The talented trio of pop-folkies from Portland are sisters Natalie Closner Schepman and Allison and Meegan Closner.