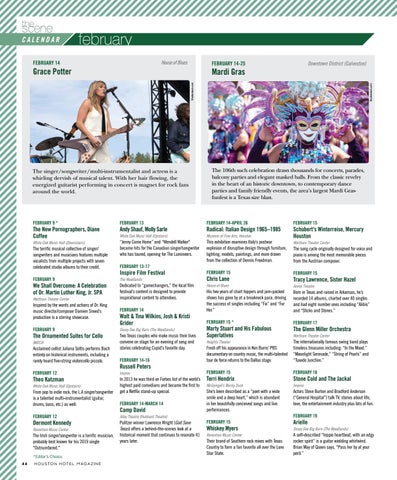 The singer/songwriter/multi-instrumentalist and actress is a whirling dervish of musical talent. With her hair flowing, the energized guitarist performing in concert is magnet for rock fans around the world.

“Jenny Come Home” and “Wendell Walker" became hits for the Canadian singer/songwriter who has toured, opening for The Lumineers.

This exhibition examines Italy’s postwar explosion of disruptive design through furniture, lighting, models, paintings, and more drawn from the collection of Dennis Freedman.

From pop to indie rock, the L.A singer/songwriter is a talented multi-instrumentalist (guitar, drums, bass, etc.) as well. FEBRUARY 12

The 106th such celebration draws thousands for concerts, parades, balcony parties and elegant masked balls. From the classic revelry in the heart of an historic downtown, to contemporary dance parties and family friendly events, the area’s largest Mardi Grasfunfest is a Texas size blast.

Inspired by the words and actions of Dr. King music director/composer Damien Sneed’s production is a stirring showcase.

The Ornamented Suites for Cello

His two years of chart toppers and jam-packed shows has gone by at a breakneck pace, driving the success of singles including “Fix” and “For Her.” FEBRUARY 15 *

Marty Stuart and His Fabulous Superlatives

The song cycle originally designed for voice and piano is among the most memorable pieces from the Austrian composer. FEBRUARY 15

Born in Texas and raised in Arkansas, he’s recorded 14 albums, charted over 40 singles and had eight number ones including “Alibis” and “Sticks and Stones.” FEBRUARY 17

Fresh off his appearance in Ken Burns’ PBS documentary on country music, the multi-talented tour de force returns to the Dallas stage.

The internationally famous swing band plays timeless treasures including: “In the Mood,” “Moonlight Serenade,” “String of Pearls” and “Tuxedo Junction.”

In 2013 he was third on Forbes list of the world’s highest paid comedians and became the first to get a Netflix stand-up special.

She’s been described as a “poet with a wide smile and a deep heart,” which is abundant in her beautifully conceived songs and live performances.

Stone Cold and The Jackal

Their brand of Southern rock mixes with Texas Country to form a fan favorite all over the Lone Star State.

A self-described “hippie heartbeat, with an edgy rocker spirit” is a guitar wielding whirlwind. Brian May of Queen says, “Pass her by at your peril.”