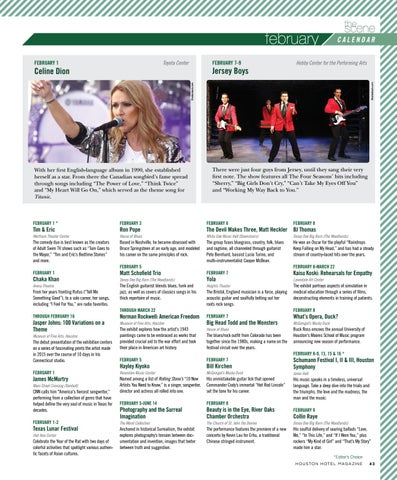 With her first English-language album in 1990, she established herself as a star. From there the Canadian songbird’s fame spread through songs including “The Power of Love,” “Think Twice” and “My Heart Will Go On,” which served as the theme song for Titanic.

There were just four guys from Jersey, until they sang their very first note. The show features all The Four Seasons’ hits including “Sherry,” “Big Girls Don’t Cry,” “Can’t Take My Eyes Off You” and “Working My Way Back to You.”

The comedy duo is best known as the creators of Adult Swim TV shows such as “Tom Goes to the Mayor,” “Tim and Eric’s Bedtime Stories” and more.

Based in Nashville, he became obsessed with Bruce Springsteen at an early age, and modeled his career on the same principles of rock.

He won an Oscar for the playful “Raindrops Keep Falling on My Head,” and has had a steady stream of country-laced hits over the years.

From her years fronting Rufus (“Tell Me Something Good”), to a solo career, her songs, including “I Feel For You,” are radio favorites.

The English guitarist blends blues, funk and jazz, as well as covers of classics songs in his thick repertoire of music.

The Bristol, England musician is a force, playing acoustic guitar and soulfully belting out her roots rock songs.

THROUGH MARCH 22 THROUGH FEBRUARY 16

The debut presentation of the exhibition centers on a series of fascinating prints the artist made in 2015 over the course of 10 days in his Connecticut studio. FEBRUARY 1

CNN calls him "America's fiercest songwriter,” performing from a collection of gems that have helped define the very soul of music in Texas for decades. FEBRUARY 1-2

Celebrate the Year of the Rat with two days of colorful activities that spotlight various authentic facets of Asian cultures.

The exhibit portrays aspects of simulation in medical education through a series of films, deconstructing elements in training of patients. FEBRUARY 8

Big Head Todd and the Monsters

The exhibit explores how the artist’s 1943 paintings came to be embraced as works that provided crucial aid to the war effort and took their place in American art history.

Named among a list of Rolling Stone’s “10 New Artists You Need to Know,” is a singer, songwriter, director and actress all rolled into one.

The blues/rock outfit from Colorado has been together since the 1980s, making a name on the festival circuit over the years.

Photography and the Surreal Imagination

His music speaks in a timeless, universal language. Take a deep dive into the trials and the triumphs, the love and the madness, the man and the music.

Beauty is in the Eye, River Oaks Chamber Orchestra

The Church of St. John the Devine

Anchored in historical Surrealism, the exhibit explores photography’s tension between documentation and invention, images that teeter between truth and suggestion.

The performance features the premiere of a new concerto by Kevin Lau for Erhu, a traditional Chinese stringed instrument.

His soulful delivery of searing ballads “Love, Me,” “In This Life,” and “If I Were You,” plus rockers “My Kind of Girl” and “That’s My Story” made him a star.