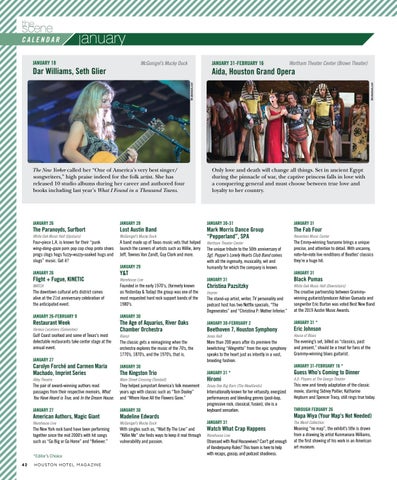 The New Yorker called her “One of America’s very best singer/ songwriters,” high praise indeed for the folk artist. She has released 10 studio albums during her career and authored four books including last year’s What I Found in a Thousand Towns.

A band made up of Texas music vets that helped launch the careers of artists such as Willie, Jerry Jeff, Townes Van Zandt, Guy Clark and more.

Gulf Coast seafood and some of Texas's most delectable restaurants take center stage at the annual event.

The downtown cultural arts district comes alive at the 21st anniversary celebration of the anticipated event.

Only love and death will change all things. Set in ancient Egypt during the pinnacle of war, the captive princess falls in love with a conquering general and must choose between true love and loyalty to her country.

The unique tribute to the 50th anniversary of Sgt. Pepper’s Lonely Hearts Club Band comes with all the ingenuity, musicality, wit and humanity for which the company is known.

Founded in the early 1970's, (formerly known as Yesterday & Today) the group was one of the most requested hard rock support bands of the 1980's.

More than 200 years after its premiere the bewitching “Allegretto” from the epic symphony speaks to the heart just as intently in a vast, brooding fashion.

The evening’s set, billed as “classics, past and present,” should be a treat for fans of the Grammy-winning blues guitarist.

The pair of award-winning authors read passages from their respective memoirs, What You Have Heard is True, and In the Dream House.

They helped jumpstart America’s folk movement years ago with classic such as “Tom Dooley” and “Where Have All the Flowers Gone.”

Internationally known for her virtuosity, energized performances and blending genres (post-bop, progressive rock, classical, fusion), she is a keyboard sensation.

The New York rock band have been performing together since the mid 2000’s with hit songs such as “Go Big or Go Home” and “Believer.”

With singles such as, “Wait By The Line” and “Killin Me” she finds ways to keep it real through vulnerability and passion.

Watch What Crap Happens Obsessed with Real Housewives? Can't get enough of Vanderpump Rules? This team is here to help with recaps, gossip, and podcast shadiness.

A.D. Players at The George Theater

Mapa Wiya (Your Map's Not Needed) The Menil Collection

Meaning “no map”, the exhibit’s title is drawn from a drawing by artist Kunmanara Williams, at the first showing of his work in an American art museum.