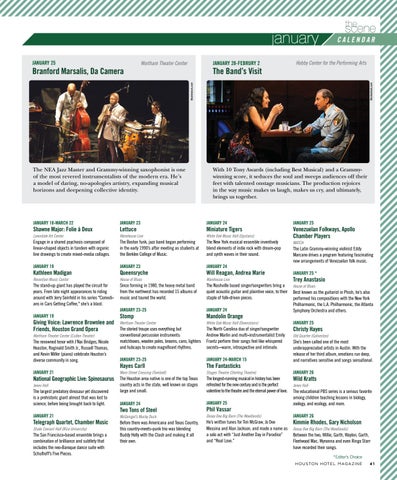 The NEA Jazz Master and Grammy-winning saxophonist is one of the most revered instrumentalists of the modern era. He’s a model of daring, no-apologies artistry, expanding musical horizons and deepening collective identity.

With 10 Tony Awards (including Best Musical) and a Grammywinning score, it seduces the soul and sweeps audiences off their feet with talented onstage musicians. The production rejoices in the way music makes us laugh, makes us cry, and ultimately, brings us together.

Engage in a shared psychosis composed of linear-shaped objects in tandem with organic line drawings to create mixed-media collages.

The Boston funk, jazz band began performing in the early 1990’s after meeting as students at the Berklee College of Music.

The New York musical ensemble inventively blend elements of indie rock with dream-pop and synth waves in their sound.

The stand-up giant has played the circuit for years. From late night appearances to riding around with Jerry Seinfeld in his series "Comedians in Cars Getting Coffee," she’s a blast.

Since forming in 1980, the heavy metal band from the northwest has recorded 15 albums of music and toured the world.

The Nashville based singer/songwriters bring a quiet acoustic guitar and plaintive voice, to their staple of folk-driven pieces.

She’s been called one of the most underappreciated artists in Austin. With the release of her third album, emotions run deep, and narratives sensitive and songs sensational.

The Houston area native is one of the top Texas country acts in the state, well known on stages large and small.

The longest-running musical in history has been refreshed for the new century and is the perfect valentine to the theatre and the eternal power of love.

The educational PBS series is a serious favorite among children teaching lessons in biology, zoology, and ecology, and more.

The largest predatory dinosaur yet discovered is a prehistoric giant almost that was lost to science, before being brought back to light. JANUARY 21

The San Francisco-based ensemble brings a combination of brilliance and subtlety that includes the neo-Baroque dance suite with Schulhoff’s Five Pieces.

Two Tons of Steel Before there was Americana and Texas Country, this country-meets-punk trio was blending Buddy Holly with the Clash and making it all their own.

Phil Vassar He’s written tunes for Tim McGraw, Jo Dee Messina and Alan Jackson, and made a name as a solo act with “Just Another Day in Paradise” and “Real Love.”