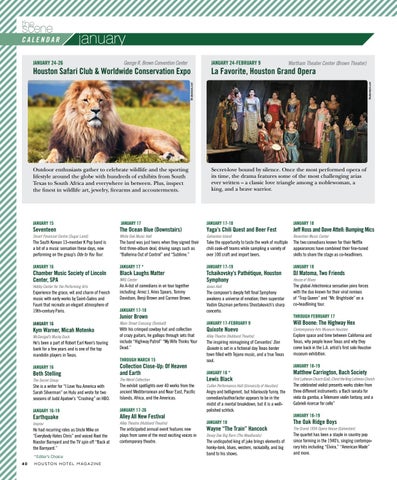 Outdoor enthusiasts gather to celebrate wildlife and the sporting lifestyle around the globe with hundreds of exhibits from South Texas to South Africa and everywhere in between. Plus, inspect the finest in wildlife art, jewelry, firearms and accouterments.

The South Korean 13-member K Pop band is a bit of a music sensation these days, now performing on the group’s Ode to You Tour.

The band was just teens when they signed their first three-album deal, driving songs such as “Ballerina Out of Control” and “Sublime.”

Take the opportunity to taste the work of multiple chili cook-off teams while sampling a variety of over 100 craft and import beers.

The two comedians known for their Netflix appearances have combined their fine-tuned skills to share the stage as co-headliners.

Experience the grace, wit and charm of French music with early works by Saint-Saëns and Fauré that recreate an elegant atmosphere of 19th-century Paris. JANUARY 16

He’s been a part of Robert Earl Keen’s touring bank for a few years and is one of the top mandolin players in Texas.

An A-list of comedians in on tour together including: Arnez J, Aries Spears, Tommy Davidson, Benji Brown and Carmen Brown.

Junior Brown With his crimped cowboy hat and collection of crazy guitars, he gallops through sets that include “Highway Patrol” “My Wife Thinks Your Dead.” THROUGH MARCH 15

The inspiring reimagining of Cervantes’ Don Quixote is set in a fictional day Texas border town filled with Tejano music, and a true Texas soul.

Collection Close-Up: Of Heaven and Earth

She is a writer for “I Love You America with Sarah Silverman” on Hulu and wrote for two seasons of Judd Apatow's “Crashing” on HBO.

The exhibit spotlights over 40 works from the ancient Mediterranean and Near East, Pacific Islands, Africa, and the Americas.

Angry and belligerent, but hilariously funny, the comedian/author/actor appears to be in the midst of a mental breakdown, but it is a wellpolished schtick.

He had recurring roles as Uncle Mike on “Everybody Hates Chris” and voiced Root the Rooster Barnyard and the TV spin off “Back at the Barnyard.”

The anticipated annual event features new plays from some of the most exciting voices in contemporary theatre.

Secret-love bound by silence. Once the most performed opera of its time, the drama features some of the most challenging arias ever written -- a classic love triangle among a noblewoman, a king, and a brave warrior.

Wayne “The Train” Hancock The undisputed king of juke brings elements of honky-tonk, blues, western, rockabilly, and big band to his shows.

The global /electronica sensation joins forces with the duo known for their viral remixes of “Trap Queen” and “Mr. Brightside” on a co-headlining tour. THROUGH FEBRUARY 17

Explore space and time between California and Texas, why people leave Texas and why they come back in the L.A. artist’s first solo Houston museum exhibition. JANUARY 18-19

The quartet has been a staple in country pop since forming in the 1940’s, singing contemporary hits including “Elvira,” “American Made” and more.