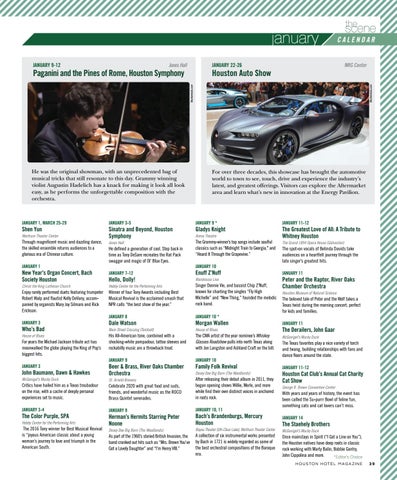 Paganini and the Pines of Rome, Houston Symphony

He was the original showman, with an unprecedented bag of musical tricks that still resonate to this day. Grammy winning violist Augustin Hadelich has a knack for making it look all look easy, as he performs the unforgettable composition with the orchestra.

Through magnificent music and dazzling dance, the skilled ensemble returns audiences to a glorious era of Chinese culture. JANUARY 1

He defined a generation of cool. Step back in time as Tony DeSare recreates the Rat Pack swagger and magic of Ol’ Blue Eyes.

For over three decades, this showcase has brought the automotive world to town to see, touch, drive and experience the industry’s latest, and greatest offerings. Visitors can explore the Aftermarket area and learn what’s new in innovation at the Energy Pavilion.

The Grammy-winner’s top songs include soulful classics such as “Midnight Train to Georgia," and “Heard It Through the Grapevine.” JANUARY 10

Winner of four Tony Awards including Best Musical Revival is the acclaimed smash that NPR calls “the best show of the year.”

His All-American tone, combined with a shocking-white pompadour, tattoo sleeves and rockabilly music are a throwback treat.

The CMA artist of the year nominee’s Whiskey Glasses Roadshow pulls into north Texas along with Jon Langston and Ashland Craft on the bill.

For years the Michael Jackson tribute act has moonwalked the globe playing the King of Pop’s biggest hits. JANUARY 3

Critics have hailed him as a Texas troubadour on the rise, with a cache of deeply personal experiences set to music. JANUARY 3-4

The Color Purple, SPA Hobby Center for the Performing Arts

The 2016 Tony winner for Best Musical Revival is “joyous American classic about a young woman’s journey to love and triumph in the American South.

Celebrate 2020 with great food and suds, friends, and wonderful music as the ROCO Brass Quintet serenades.

After releasing their debut album in 2011, they began opening shows Willie, Merle, and more while find their own distinct voices in anchored in roots rock.

As part of the 1960’s storied British Invasion, the band cranked out hits such as “Mrs. Brown You’ve Got a Lovely Daughter” and “I’m Henry VIII.”

The Greatest Love of All: A Tribute to Whitney Houston The Grand 1894 Opera House (Galveston)

The spot-on vocals of Belinda Davids take audiences on a heartfelt journey through the late singer’s greatest hits. JANUARY 11

The beloved tale of Peter and the Wolf takes a Texas twist during the morning concert, perfect for kids and families. JANUARY 11

The Texas favorites play a nice variety of torch and twang, building relationships with fans and dance floors around the state. JANUARY 11-12

With years and years of history, the event has been called the Su-purrr Bowl of feline fun, something cats and cat lovers can’t miss.

A collection of six instrumental works presented by Bach in 1721 is widely regarded as some of the best orchestral compositions of the Baroque era.

The Staehely Brothers Once mainstays in Spirit (“I Got a Line on You”), the Houston natives have deep roots in classic rock working with Marty Balin, Bobbie Gentry, John Cippolina and more. *Editor’s Choice H O U S TO N H OT E L M A G A Z I N E