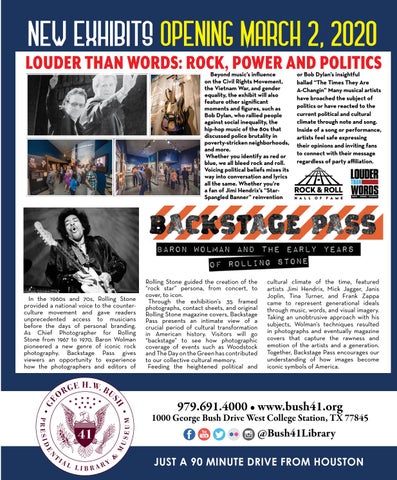 NEW exhibits OPENING MARCH 2, 2020 LOUDER THAN WORDS: ROCK, POWER AND POLITICS Beyond music’s influence on the Civil Rights Movement, the Vietnam War, and gender equality, the exhibit will also feature other significant moments and figures, such as Bob Dylan, who rallied people against social inequality, the hip-hop music of the 80s that discussed police brutality in poverty-stricken neighborhoods, and more. Whether you identify as red or blue, we all bleed rock and roll. Voicing political beliefs mixes its way into conversation and lyrics all the same. Whether you’re a fan of Jimi Hendrix’s “StarSpangled Banner” reinvention

In the 1960s and 70s, Rolling Stone provided a national voice to the counterculture movement and gave readers unprecedented access to musicians before the days of personal branding. As Chief Photographer for Rolling Stone from 1967 to 1970, Baron Wolman pioneered a new genre of iconic rock photography. Backstage Pass gives viewers an opportunity to experience how the photographers and editors of

Rolling Stone guided the creation of the “rock star” persona, from concert, to cover, to icon. Through the exhibition’s 35 framed photographs, contact sheets, and original Rolling Stone magazine covers, Backstage Pass presents an intimate view of a crucial period of cultural transformation in American history. Visitors will go “backstage” to see how photographic coverage of events such as Woodstock and The Day on the Green has contributed to our collective cultural memory. Feeding the heightened political and

or Bob Dylan’s insightful ballad “The Times They Are A-Changin” Many musical artists have broached the subject of politics or have reacted to the current political and cultural climate through note and song. Inside of a song or performance, artists feel safe expressing their opinions and inviting fans to connect with their message regardless of party affiliation.

cultural climate of the time, featured artists Jimi Hendrix, Mick Jagger, Janis Joplin, Tina Turner, and Frank Zappa came to represent generational ideals through music, words, and visual imagery. Taking an unobtrusive approach with his subjects, Wolman’s techniques resulted in photographs and eventually magazine covers that capture the rawness and emotion of the artists and a generation. Together, Backstage Pass encourages our understanding of how images become iconic symbols of America.