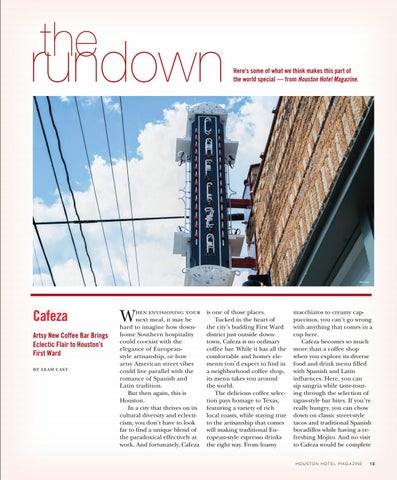 Here’s some of what we think makes this part of the world special — from Houston Hotel Magazine.

hen envisioning your next meal, it may be hard to imagine how downhome Southern hospitality could co-exist with the elegance of Europeanstyle artisanship, or how artsy American street vibes could live parallel with the romance of Spanish and Latin tradition. But then again, this is Houston. In a city that thrives on its cultural diversity and eclecticism, you don’t have to look far to find a unique blend of the paradoxical effectively at work. And fortunately, Cafeza

is one of those places. Tucked in the heart of the city’s budding First Ward district just outside downtown, Cafeza is no ordinary coffee bar. While it has all the comfortable and homey elements you’d expect to find in a neighborhood coffee shop, its menu takes you around the world. The delicious coffee selection pays homage to Texas, featuring a variety of rich local roasts, while staying true to the artisanship that comes will making traditional European-style espresso drinks the right way. From foamy

macchiatos to creamy cappuccinos, you can’t go wrong with anything that comes in a cup here. Cafeza becomes so much more than a coffee shop when you explore its diverse food and drink menu filled with Spanish and Latin influences. Here, you can sip sangria while taste-touring through the selection of tapas-style bar bites. If you’re really hungry, you can chow down on classic street-style tacos and traditional Spanish bocadillos while having a refreshing Mojito. And no visit to Cafeza would be complete H O U S TO N H OT E L M A G A Z I N E