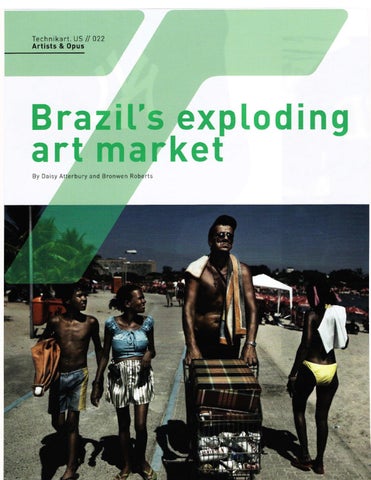 A ptate of feijoada, a Brazitian beef and bean dish, rests on a bikini - wearing woman's burnished [egs. FLakes of farofa, or toasted manioc-corn fLour, settl.e over the dish and dust her thighs, [ik1 snow, as forks jut out of the food. The photograph, from the Ramos series, is by JuLio Bittencourt, one of the rising stars of contemporary BraziLian photography and just one of the many BraziLian talents on the internationaL art scene today.

With the infecttous energy of an impromptu samba, BraziLian artists are steaLing the scene ln coLLect ons,

galLeries, and public works alL over the worLd Street art by "The Twtns" in EngLish, has appeared both Os G0meos, or

lLegaLLy on the streets of CheLsea in Manhattan ihe Tate Modern in London. Even the rotunda of and outside Paris's Pantheon received a temporary Brazllian makeover "biomorphlc" instaILatlon, in the form of Ernesto Neto's

Leviathon Thot, hanging from the ceiLing Like an aLien egg-sack. Demand for the new, onginaL, and diverse has seen unprecedented support for these and other BraziLian works in scuLpture, painting, graffiti, and photography. The contemporary art scenes in Sao PauLo and Rio are experiencing exponentiaL growth at the same time as the country's commodities market is helping to transform BraziL into one of the worLd's l'arqest economies. 0f course, not alL emerging markets are hotbeds for art colLection, but BraziL has some of the major components necessary: maturty, infrastructure, and momentum. The history of art in the country is well-estabLished, with both public and private seciors supporting the arts. After corporate tax breaks were introduced in the 1990s BraziLian companies have been reimbursed up to 100% for their culturaL investments. Companies [rke Banco do BrasiL, Santander, and Caixa Economica Federal have set up art centers throughout BraziL, funding new work. lncreased sociaL awareness and government-sponsored initiatives to aid the poor have aLso opened doors for art. Bittencourt s sociaLLy-charged work has helped hrm to become one of the country s most important and accLaimed photographers. He has exhibited in over a dozen countnes

in the past five years aLone. His best-regarded work to date is a coLLection of composite photos from a three-year prolect that focused on the stories of squatter-resrdenis in a run down S5o PauLo buiLding, pubLished in his first book,

ln a window of Prestes Maia 911 BuiLding. The work consists of a series of individualimages that are themselves made up of composites layered in a technique known as HDR, or "high dynamic range". The resuLting photographs reveaL a startLrng tonal range and an almost surreaL, extraterrestriaL gLow, highlighting the contrast between the peop[e's bright, coLorfuLLlves and their drab, squaLid surroundings. These contrasis, integral to the story of urban BraziL, are keys to understanding Bittencourt's work. Hrs success aLso has to do with hrs understanding of the thr ving scene in art-motivated BraziL. He notes that "creativrty, flexrbiLrty, and so much diversity have always pLayed an important roLe in the Life ol Brazi[ian society and can explarn much of where it aLl comes from, but the economy over the past decade has definitely pushed it to a different LeveL " A[ex Bueno de Moraes and Andrew Klug, cofounders of 1 500 GaLLery, a newish venue in NY's West CheLsea neighborhood, are Looking to brng Bittencourt and other BrazrLian photographers to the attention of collectors in American and internationaL markets. SpeciaLizing in Brazilran photography,

the gaLLery represents seveTaL of the best-known names in Brazil, both emergrng and estabLished. The owners, responding to a hot, hip market, have observed that investors ln Sio Paulo and Rro are Leaning heavrLy on natrve artists, and thus are spending srgnificani sums of money on names that most in the New York market have never heard of KLug recalls 'I recent[y contacted the departments of photography ai the major auction houses here in New York,

Lookrng for cons gnments by Mario Crevo Neto and Miguel

ju l.io b ittene ou rt.c0 m Ramos is a series of color photographs taken at an artificial saLt-water lake located amidst favelas, or shantytowns, in Rio de Janeiro. The area around PiscinSo de Ramos is noisy and polLuted. Bittencourt's photographs show people in an ethereal light, exposing dark-tinted, richly-polished bodies and limbs. A woman slathered in foam sunscreen sits in a chair, Christ the Redeemer on a towel at her feet. A man sits on a bench, a blue rope of a shirt traiLing down his back to thong cleavage. The surfaces are pearly, the subjects bizarre in their contrasting tones: sexy, comicaL, grotesque, and serene. The photography captures the human as it is, Brazilian or otherwise: reaL, unabashed, and ripe with b u rgeo n i n g e ne rgy. Current exhibition: Hirosuke Kitamura: Hidra Curated by Miguet Rio Branco