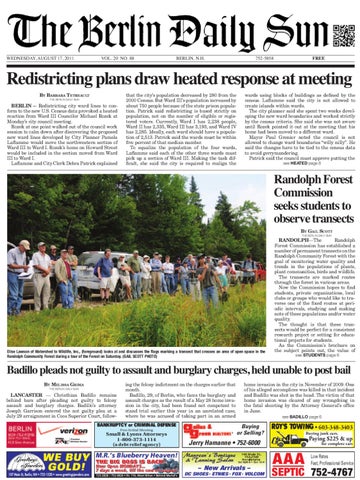 BERLIN -- Redistricting city ward lines to conform to the new U.S. Census data provoked a heated reaction from Ward III Councilor Michael Rozek at Monday’s city council meeting. Rozek at one point walked out of the council work session to calm down after discovering the proposed new ward lines developed by City Planner Pamela Laflamme would move the northwestern section of Ward III to Ward I. Rozek’s home on Howard Street would be included in the section moved from Ward III to Ward I. Laflamme and City Clerk Debra Patrick explained

that the city’s population decreased by 280 from the 2000 Census. But Ward III’s population increased by about 750 people because of the state prison population. Patrick said redistricting is based strictly on population, not on the number of eligible or registered voters. Currently, Ward I has 2,238 people, Ward II has 2,335, Ward III has 3,193, and Ward IV has 2,285. Ideally, each ward should have a population of 2,513. Patrick said the wards must be within five percent of that median number. To equalize the population of the four wards, Laflamme said each of the other three wards must pick up a section of Ward III. Making the task difficult, she said the city is required to realign the

wards using blocks of buildings as defined by the census. Laflamme said the city is not allowed to create islands within wards. The city planner said she spent two weeks developing the new ward boundaries and worked strictly by the census criteria. She said she was not aware until Rozek pointed it out at the meeting that his home had been moved to a different ward. Mayor Paul Grenier noted the council is not allowed to change ward boundaries “willy nilly”. He said the changes have to be tied to the census data to avoid gerrymandering. Patrick said the council must approve putting the see HEATED page 8

Elise Lawson of Watershed to Wildlife, Inc., (foreground) looks at and discusses the flags marking a transect that crosses an area of open space in the Randolph Community Forest during a tour of the Forest on Saturday. (GAIL SCOTT PHOTO)

RANDOLPH—The Randolph Forest Commission has established a number of permanent transects on the Randolph Community Forest with the goal of monitoring water quality and trends in the populations of plants, plant communities, birds and wildlife. The transects are marked routes through the forest in various areas. Now the Commission hopes to find students, private organizations, local clubs or groups who would like to traverse one of the fixed routes at periodic intervals, studying and making note of these populations and/or water quality. The thought is that these transects would be perfect for a consistent research project or setting for educational projects for students. As the Commission’s brochure on the subject points out, the value of see STUDENTS page 6

ing the felony indictment on the charges earlier that month. Badillo, 29, of Berlin, who faces the burglary and assault charges as the result of a May 28 home invasion in the city, had been found not competent to stand trial earlier this year in an unrelated case, where he was accused of taking part in an armed

THE BIG BOSS IS BACK!

home invasion in the city in November of 2009. One of his alleged accomplices was killed in that incident and Badillo was shot in the head. The victim of that home invasion was cleared of any wrongdoing in the fatal shooting by the Attorney General’s office in June. 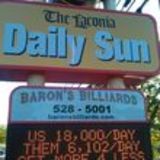