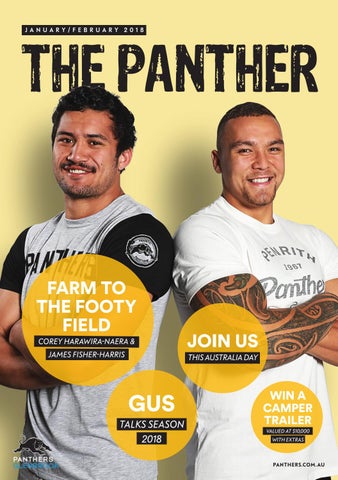 JOIN US THIS AUSTRALIA DAY

WIN A CAMPER TRAILER VALUED AT $10,000 WITH EXTRAS

Footy Gods Guiding Journey From the Farm to the Footy Field The ‘Footy Gods’ often have much to answer for to the average punter who witnesses their team cruelled by bad decisions, injury to key players or the bounce of the ball not going their way. But for two happy-go-lucky country boys from Ngāpuhi in the north island of New Zealand, those same football gods are playing a part in their rise in to the limelight of the National Rugby League. James Fisher-Harris and Corey HarawiraNaera weren’t meant to make it to the pinnacle of the Rugby League world. Their towns were so remote that everyone knew each other and they passed time by fishing, swimming or being on the farm. They found Rugby League in their teenage years and, after both impressing in their local representative side, they got paid a visit by their current manager who orchestrated their move to Penrith. “My manager came up to my house and no one really comes all the way to my house,” Fisher-Harris said with a wry grin. “The opportunity was pretty big for guys like us, from where we’re from.” With their family’s blessings, both packed their bags and traded the Hokianga Harbour for the Nepean River. But the transition for two fresh-faced teens who left their loved ones was difficult. “We’re both pretty family-oriented. Mum did everything for me and ‘Fish’ so we had to start being adults. But we always got advice from our mums whenever we made decisions,” said Harawira-Naera.

The Footy Gods weren’t done there.

Their sacrifices were validated when they tasted success with the Panthers under 20’s side in 2015. That resulted in an NRL debut for Fisher-Harris in the opening round of 2016. His compatriot followed suit just over a year later.

They both made the NRL team together for the first time against their hometown team – the Warriors. However, an injury to FisherHarris would deny them the opportunity to take the field together at the same time.

Fisher-Harris recalled the mixture of emotions as he discovered the moment he worked for was finally about to happen. “The club rang mum and told her. They also organised for my family to come over to watch the game. I was stressing out, I was on the sideline for ages and when I went onto the field I felt like didn’t know what I was doing!” For Harawira-Naera it was a similar story. “The family came over and it was pretty special. Pop (grandad) and mum were probably the most proud. It’s everything you’ve been working for so you don’t want to stuff it up.” His debut was extra special given it fell on his mother’s birthday. With her name etched on his wrist as a source of inspiration, he gave her the perfect present by scoring in a 40-0 win over Newcastle.

That moment would instead arrive months later. Again against the Warriors. This time in Auckland surrounded by their loved ones. And rather than running around on the paddocks of their country towns, they were on the hallowed turf of Mt Smart Stadium. “That was like another Footy Gods kind of thing,” said Harawira-Naera. “It was special because we both got to see our families. We needed a lot of tickets.” Now both fully-fledged members of the Panthers squad and having had a taste of the Finals, the next step for the pair from Ngāpuhi is to hoist the NRL trophy aloft. And you wouldn’t bet against it. The Footy Gods will be watching over them.

“It was another moment where you think it’s fate. There were a few tears afterwards. It was a really special occasion.” “She’s everything to me. Everyone’s got that one person that’s done more for you than anyone else. I remember on my 8th birthday my wish was for her to quit smoking. So she did and hasn’t smoked since. I want to start looking after her now that I’ve for a bit more money in my pocket.”

worth of Groceries in our Great Grocery Grab

WINNER DRAWN EACH SATURDAY NIGHT AT 7.3OPM Simply spend $10 at the Bar or $20 at the Cafe to receive your entry

Pictured: James Maloney in the Red, Yellow and Green stripes.

Preparations are well underway for the 2018 season and we are very excited at the prospects at a successful year.

representative player of the future. It was also a welcome return to the Australian team for Josh Mansour. Dean Whare and Dallin WateneZelezniak have come through their NZ Kiwis campaign unscathed and are looking forward to the new season.

The pre-Christmas training period was good, albeit restricted with a number of players undergoing injury rehab and our representative stars playing in the 2017 Rugby League World Cup (RLWC).

Sione Katoa played a big role in the emergence of Tonga as a strong force in the international game and the experience gained will be invaluable for the upcoming season.

From an injury perspective players like Corey Harawira-Naera, Dylan Edwards, Tyrone May, Waqa Blake, Jed Cartwright and Bryce Cartwright all played the back part of the 2017 season with injury and have had to undergo surgery or extensive rehabilitation prior to Christmas. I can report they are on track and should be available for the start of the season, with Tyrone May the only exception. He is targeting a return sometime in April. We are extremely pleased with the performances of our players in the 2017 RLWC. Reagan Campbell-Gillard performed outstandingly in the green and gold and stamped himself as a long-term

been a success for several clubs in the NRL and at the highest levels of representative football sides. He brings a wealth of playing experience, but more importantly a wealth of successful experience. We welcome Jim and his family to the club.

Over the past couple of months we have announced several contract extensions for some of our younger players. Our fullback Dylan Edwards thoroughly deserved an upgrade and extension to his existing deal. Tyrone May has Young Jarome Luai performed established himself as an NRL admirably for Samoa against top player of the future and has also quality opposition. That experience extended his contract until 2020. will further aid his development We are also very pleased to at this stage of his career and has announce that the reliable Isaah already returned to training with Yeo has agreed to extend his the top squad. contract until season 2021. Still only 23 years old, Isaah has already The big news coming out of the played over 80 NRL games and we 2017 RLWC was the performances view him as a long-term leader at of Viliame Kikau, who starred for our club. Fiji in their run to the semi-finals. â&#x20AC;&#x2DC;Billyâ&#x20AC;&#x2122; is now injury-free and we At the moment the coaches and all saw how well he performed at players are well into their prethe back end of the season in our season preparations and looking premiership-winning ISP side. He forward to a successful season carried that through to the World ahead. Cup and earned the accolade of selection in the RLWC Team of the We again thank the Board and Tournament. Management of Panthers Group for their generous and unwavering Without doubt the biggest news support of the Panthers Rugby for Panthers this year has been the League program and the Penrith signing of James Maloney. Jim has District Junior Rugby League. PANTHERS.COM.AU

live in the lounge every SATURDAY NIGHT FROM 7PM

vel! Catering to thenune,ethxe tfole od and We have the perfect ve even the cook if you need it! Perfect for and sides to choose from. Huge variety of meats, salads for? bration! What are you waiting Birthdays, Parties or any cele us! with n ctio your next fun Call (02) 4720 6800 to book

Buy a schooner of James Squire for $5.00

Cup of coffee or tea and cake on Monday to Friday for $8.00

Terms & Conditions apply. Valid for 2018 only and not valid with any other offer. Only one of each offer per month per member and must present valid Membership Card to receive offer. Trading hours may vary so please check website. Correct at time of printing and subject to availability. RSA Laws and Conditions apply.

* Limit applies of one entry per person per day. See staff for full terms and conditions. Promotion commences on 01/12/17 and closes for purchases on 26/01/18. To enter, be a member and purchase any Iron Jack product from the Participating Venue during the Promotional Period to receive an entry task receipt. Place Entry Task Receipt in the specially marked container at the Participating Venue by 17.00 EDT (New South Wales time) on 26/01/18. Limits apply of one entry per person per day. A draw will take place at Panthers North Richmond, 33 Beaumont Ave, North Richmond NSW 2754 on 19:00 EDT on 26/01/18. The first valid entry drawn from all combined entries from Panthers Wallacia, Pathers Glenbrook and Panthers North Richmond will receive a prize. Prize consists of a Black Series Extreme Commando Camper Trailer. The prize includes: Large powder coated kitchen; 80L stainless steel water tank; Large toolbox; Large stoneguard; Bike rack support; Boat racks; Toilet and Storage cover. Total RRP value of prize = $6,500.00. All taxes (excluding GST) which may be payable as a consequence of receiving a prize are the sole responsibility of the winner. Winners are responsible for the collection of the prize from the Participating Venue. The Promoter is not responsible for delivering prizes to winners. Entry is open to residents of New South Wales aged 18 years and over. The Promoter is Penrith Rugby League Club Ltd (ABN 57 000 578 398) of 123 Mulgoa Road, Penrith, NSW 2750. The Prize Supplier is Lion Beer, Spirits & Wine Pty Ltd (ABN 13 008 596 370) of Level 7, 68 York Street, Sydney NSW 2000. Authorised under NSW Permit No LTPS-17-18807.