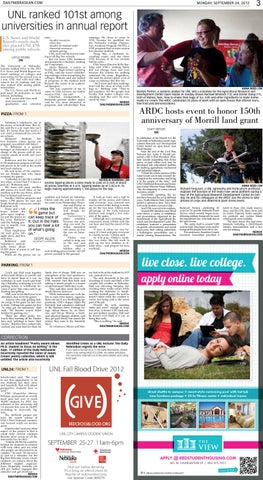 rates -faculty resources -class size -faculty-to-student ratio -financial resources -alumni giving UNL received the lowest ranking of all Big Ten schools. But for some UNL freshmen and prospective students, ranking isn’t important. Alexis Roberts, a senior at North Star High School applying at UNL, said she wasn’t considering rankings when researching for colleges. Roberts said she looked at programs in the medical field because she wants to be a physical therapist. “(It) was expected of me to come to UNL because my family went to UNL,” she said. Christian Griepenstroh, a freshman general studies major, said he was more interested in programs and scholarships than

rankings. He chose to come to UNL because he qualified for the Nebraska College Preparatory Academy Program (NCPA). a UNL program that recruits certain low-income students. Trang Mai, a freshman accounting major, said she chose UNL because of its low in-state tuition rates. UNL News Director Kelly Bartling said UNL’s ranking likely did not change from last year because the criteria for ranking remained the same. Regardless, she said she doesn’t place a lot of value in rankings like this one. “ACT score and class rankings don’t tell the story of what a college is,” Bartling said. “They’re just numbers. It’s the people and faculty that makes colleges outstanding and this can’t be measured by data.” news@ dailynebraskan.com

PIZZA: from 1 Valentino’s employees are at the mercy of kickoff time. But Allen said the 6 a.m. start time isn’t bad. It’s better than last week’s 2 a.m. start, a statement his coworkers echoed. Memorial Stadium has two kitchens where pizzas are prepped, assembled and baked. J.J. Robinson is a general manager at Valentino’s and is in charge of the pizzas sold at concession stands in north and west stadium. Robinson and his team of 15 to 20 employees prepare and bake 640 pizzas to be sold in the north and west stadium. He said many of his employees are Husker fans who enjoy working the games. “Gameday in Lincoln is unlike nickolai hammar | DN any other, at least that I’ve been a Andrea Sigwing places a pizza ready to cook on a rack of about part of,” Robinson said. His team will prep another 60 pizzas Saturday at 6 a.m. Sigwing wakes up at 5:30 a.m. to 400 pizzas for level three of the begin making approximately 1,100 pizzas for the day. stadium and the sky boxes, where they’re baked and served. It took an hour and a half to sembled and baked on Saturday, Another kitchen prepares and remake all the pizzas and Chilen bakes 1,750 pizzas for east and Chilen said she and her coworksaid everyone was stressed out South Stadium concession stands, ers come in on Wednesday, Thursand worried while trying to make day and Friday to Robinson said. up for the lost time. Chilen took prepare the pans Three and a half I miss the advantage of the walk between and dough for hours before the kitchens and caught a few mingameday. game but gates open, employutes of the game. Va l e n t i n o ’ s ees put the pizzas in can keep track of Although she’s working in the plans carefully the oven. Robinson concession stand, Chilen said she because one missaid the baking pro- it. Out in the halls can hear and feel the mood of the step can send the cess is usually over you can hear a lot crowd. entire operation by halftime. “I love it when we win beinto chaos, as was Then employees of what’s going cause it’s loud and puts everyone the case on Saturcut each pizza into on.” in a better mood,” Chilen said. day. eight slices and box At 4:30 p.m., Chilen’s workChilen was each slice. Geoff Allen called to help out day was done. She left work to Robinson said valentino’s supervisor pick up her two children to fiin the east and Valentino’s individnally relax – and prepare for next west stadium ually boxes about weekend. kitchen after a 19,200 slices of pizza to sell durNews@ rack holding pizzas broke. All 100 ing the game. DailyNebraskan.Com While all the pizzas are as- pizzas crashed to the ground.

PARKING: from 1 Leach and Hall work together at Kawasaki Motors in Lincoln and have to report there at 6 a.m. on weekdays as well. Leach said trading a Saturday of sleeping in to sell parking tickets is worthwhile because it gives him extra cash to go hunting and golfing. Hall, now in his third year as an attendant, does it for the games. Anyone who sells parking tickets can go to the game for free once it starts. Getting into games for free “is what got me interested,” Hall said. “We become season ticket holders by parking cars.” There are other perks, too. Leach likes meeting all the Husker fans and “get(ting) to know their stories.” Boosters have cooked ribs, seafood and roast beef for them for

lunch, free of charge. Hall sees an atmosphere of fun and sportsmanship he recalls from his years as a UNL student. And they both said talking to drunk people is a source of entertainment while they work. They said they rarely deal with drunk drivers, however. While individuals can work the lots to earn extra money, organizations can use it as a fundraising opportunity. UNL’s Kappa Alpha Psi fraternity had volunteers stationed at the Stadium Drive Parking Garage. Albert Maxey Sr., an alumnus, and Devan Murray, a freshman physical therapy student, said they get paid hourly but donate the money they earn to the fraternity fund. As volunteers, Maxey and Mur-

ray had to be at the stadium by 8:15 a.m. instead of 6 a.m. The only downside to the job, according to Leach and Hall, is the variable fall weather in Nebraska. Hall was shivering Saturday, but sweating three weeks earlier while working the Nebraska vs. Southern Miss football game. He said he doesn’t mind when the weather is warm, but being cold is the worst part of the job. Overall, the early morning shifts just aren’t enough to keep him away. A former UNL track runner and military member, Hall said he doesn’t even think of 6 a.m. as being that early. “This is nothing,” he said. News@ DailyNebraskan.com

Marilyn Fenton, a systems analyst for UNL and a volunteer for the Agricultural Research and Development Center Open House on Sunday shows Rachael Binstock (12), and Darian Stang (11), both of Wahoo, Neb., how to shake their bags of ice, milk and other ingredients to make homemade ice cream. The ARDC celebrated 50 years of work with an open house that offered tours, free food and demonstrations.

ARDC hosts event to honor 150th anniversary of Morrill land grant staff report DN In celebration of the Morrill Act, the University of Nebraska-Lincoln Agricultural Research and Development Center hosted an open house near Mead Sunday. Near the end of the Civil War, Vermont Sen. Justin S. Morrill presented a bill to then-President Abraham Lincoln requesting that choice pieces of land within each state be developed into educational facilities for teaching agricultural, mechanical and industrial subjects. “I think the whole mission (of the Land Grant) was to take research developed at the universities and bring it to the people of the state,” said UNL’s Southeast Research and Extension Center Director Susan Williams, “like developments in water, natural resources, people.” Universities spanning the nation have honored the act in different ways. North Dakota State University hosted a summit in June. Iowa State University hosted a concert in July. And UNL was not to be outdone. Around 400 attendees near Mead were shown a variety of exhibitions and presentations organized by the departments of the Agricultural Research and Development Center. The exhibitions featured a presentation on genetic advancements and recent discoveries, beef cutting instruction, a buffalograss presentation and a remote sensing demonstration. The

Richard Ferguson, a UNL agronomy and horticulture professor, explains the function of the multi-roter aerial platform during a tour of the Agricultural Research Development Center on Sunday. He and his colleagues at the ARDC use the drone to take photos of crops and determine plant stress levels.

lunch to those who made reservations, and the UNL Dairy Store sold ice cream. Popcorn, honey samples, soy products and various baked wheat goods were available. The open house also had entertainment, including a LEGO-based robotics demonstration and a live cow for milking. news@ dailynebraskan.com

Backyard Farmer, celebrating 60 years on TV, and the Nebraska Forest Service, which recently began reconditioning military transports for rural fire department use, were both also at the open house. The center itself is around 9,000 acres in total. Tour buses were used to transport the people from site to site. For sustenance, Saunders County Livestock Association provided a

correction An article headlined “Poetry award allows Ph.D. student to focus on writing” in the Sept. 17 edition of the Daily Nebraskan incorrectly reported the name of James Crews’ poetry collection, which is still untitled. The article also incorrectly

identified Crews as a UNL lecturer. The Daily Nebraskan regrets the error.

If you spot a factual error in the Daily Nebraskan, please report it by calling (402) 472-2588. An editor will place the correction that will run in the print edition, also using bold type.

unl24: from 1 Schadwinkel said. “We want to use this opportunity to let our students tell their story and hopefully that will attract prospective students here as well.” UNL Chancellor Harvey Perlman announced an enrollment goal last year to reach 30,000 students by 2017. Enrollment at the university fell 1.6 percent this year to 24,207, according to university figures. The #UNL24 project follows the recent release of UNL’s First National commercial focused solely on recruitment. Schadwinkel said one other aspect of the project is that it could help current students become more aware of all the university has to offer. “I think (#UNL24) could be helpful for students to connect with each other and see what else people are interested in on campus,” he said. “It can serve as sort of a refresher for the Big Red Welcome event, where students can relearn about the different student organizations. Hopefully, students can still get further engaged this semester and get involved.” news@ dailynebraskan.com 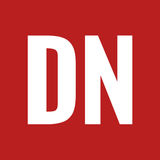