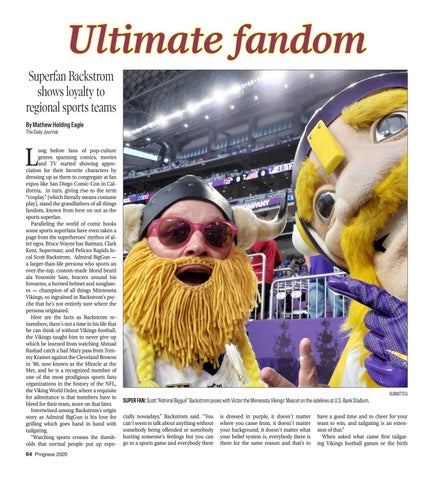 ong before fans of pop-culture genres spanning comics, movies and TV started showing appreciation for their favorite characters by dressing up as them to congregate at fan expos like San Diego Comic-Con in California, in turn, giving rise to the term “cosplay” (which literally means costume play), stand the grandfathers of all things fandom, known from here on out as the sports superfan. Paralleling the world of comic books some sports superfans have even taken a page from the superheroes’ mythos of alter egos, Bruce Wayne has Batman; Clark Kent, Superman; and Pelican Rapids local Scott Backstrom, Admiral BigGun — a larger-than-life persona who sports an over-the-top, custom-made blond beard ala Yosemite Sam, bracers around his forearms, a horned helmet and sunglasses — champion of all things Minnesota Vikings, so ingrained in Backstrom’s psyche that he’s not entirely sure where the persona originated. Here are the facts as Backstrom remembers, there’s not a time in his life that he can think of without Vikings football, the Vikings taught him to never give up which he learned from watching Ahmad Rashad catch a hail Mary pass from Tommy Kramer against the Cleveland Browns in ‘80, now known as the Miracle at the Met, and he is a recognized member of one of the most prodigious sports fans organizations in the history of the NFL, the Viking World Order, where a requisite for admittance is that members have to bleed for their team, more on that later. Intertwined among Backstrom’s origin story as Admiral BigGun is his love for grilling which goes hand in hand with tailgating. “Watching sports crosses the thresholds that normal people put up espe64 Progress 2020

SUPER FAN: Scott “Admiral Biggun” Backstrom poses with Victor the Minnesota Vikings’ Mascot on the sidelines at U.S. Bank Stadium. cially nowadays,” Backstrom said. “You can’t seem to talk about anything without somebody being offended or somebody hurting someone’s feelings but you can go to a sports game and everybody there

have a good time and to cheer for your team to win, and tailgating is an extension of that.” When asked what came first tailgating Vikings football games or the birth