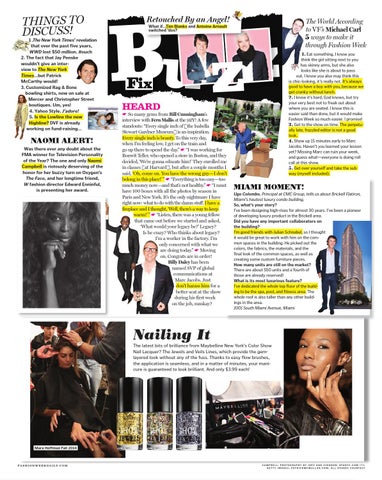 1 .The New York Times’ revelation that over the past five years, WWD lost $50 million. #ouch 2. The fact that Jay Penske wouldn’t give an interview to The New York Times…but Patrick McCarthy would! 3. Customized Rag & Bone bowling shirts, now on sale at Mercer and Christopher Street boutiques. Um, yes! 4. Yahoo Style. J’adore! 5. Is the Lowline the new Highline? DVF is already working on fund-raising…

NAOMI ALERT! Was there ever any doubt about the FMA winner for Television Personality of the Year? The one and only Naomi Campbell is riotously deserving of the honor for her buzzy turn on Oxygen’s The Face, and her longtime friend, W fashion director Edward Enninful, is presenting her award.

Bu zz Retouched By an Angel!

☛ So many gems from Bill Cunningham’s interview with Fern Mallis at the 92Y! A few standouts: “Every single inch of [the Isabella Stewart Gardner Museum] is an inspiration. Every single inch is beauty. To this very day, when I’m feeling low, I get on the train and go up there to spend the day.” ☛ “I was working for Bonwit Teller, who opened a store in Boston, and they decided, ‘We’re gonna educate him!’ They enrolled me in classes [at Harvard], but after a couple months I said, ‘Oh, come on. You have the wrong guy—I don’t belong in this place!’ ” ☛ “Everything is too easy—too much money now—and that’s not healthy.” ☛ “I must have 100 boxes with all the photos by season in Paris and New York. It’s the only nightmare I have right now: what to do with the damn stuff. I have a fireplace and I thought, ‘Well, there’s a way to keep warm!’ ” ☛ “Listen, there was a young fellow that came out before we started and asked, ‘What would your legacy be?’ Legacy? Is he crazy? Who thinks about legacy? I’m a worker in the factory. I’m only concerned with what we are doing today.” ☛ Moving on. Congrats are in order! Billy Daley has been named SVP of global communications at Marc Jacobs. Just don’t harass him for a better seat at the show during his first week on the job, mmkay?

1. Eat something. I know you think the girl sitting next to you has skinny arms, but she also looks like she is about to pass out. I know you also may think this is chic-looking, it’s really not. It’s always good to have a boy with you, because we get cranky without lunch. 2. I know it’s hard, God knows, but try your very best not to freak out about where you are seated. I know this is easier said than done, but it would make Fashion Week so much easier. I promise! 3. Get to the show on time. The perpetually late, frazzled editor is not a good look. 4. Show up 15 minutes early to Marc Jacobs. Haven’t you learned your lesson yet? Missing Marc can ruin your week, and guess what—everyone is doing roll call at this show. 5. Get over yourself and take the subway (myself included).

Miami Moment! Ugo Colombo, Principal at CMC Group, tells us about Brickell Flatiron, Miami’s hautest luxury condo building. So, what’s your story? I’ve been designing high-rises for almost 30 years. I’ve been a pioneer of developing luxury product in the Brickell area. Did you have any important collaborators on the building? I’m good friends with Julian Schnabel, so I thought it would be great to work with him on the common spaces in the building. He picked out the colors, the fabrics, the materials, and the final look of the common spaces, as well as creating some custom furniture pieces. How many units are still on the market? There are about 550 units and a fourth of those are already reserved! What is its most luxurious feature? I’ve dedicated the whole top floor of the building to be the spa, pool, and fitness area. The whole roof is also taller than any other buildings in the area. 1001 South Miami Avenue, Miami

The latest bits of brilliance from Maybelline New York’s Color Show Nail Lacquer? The Jewels and Veils Lines, which provide the gemlayered look without any of the fuss. Thanks to easy flow brushes, the application is seamless, and in a matter of minutes, your manicure is guaranteed to look brilliant. And only $3.99 each! 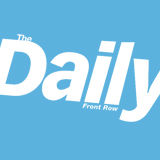