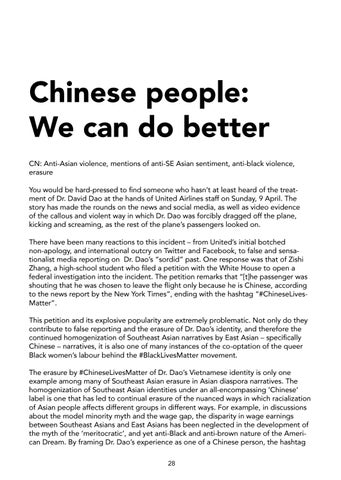 Chinese people: We can do better CN: Anti-Asian violence, mentions of anti-SE Asian sentiment, anti-black violence, erasure You would be hard-pressed to find someone who hasn’t at least heard of the treatment of Dr. David Dao at the hands of United Airlines staff on Sunday, 9 April. The story has made the rounds on the news and social media, as well as video evidence of the callous and violent way in which Dr. Dao was forcibly dragged off the plane, kicking and screaming, as the rest of the plane’s passengers looked on. There have been many reactions to this incident – from United’s initial botched non-apology, and international outcry on Twitter and Facebook, to false and sensationalist media reporting on Dr. Dao’s “sordid” past. One response was that of Zishi Zhang, a high-school student who filed a petition with the White House to open a federal investigation into the incident. The petition remarks that “[t]he passenger was shouting that he was chosen to leave the flight only because he is Chinese, according to the news report by the New York Times”, ending with the hashtag “#ChineseLivesMatter”. This petition and its explosive popularity are extremely problematic. Not only do they contribute to false reporting and the erasure of Dr. Dao’s identity, and therefore the continued homogenization of Southeast Asian narratives by East Asian – specifically Chinese – narratives, it is also one of many instances of the co-optation of the queer Black women’s labour behind the #BlackLivesMatter movement. The erasure by #ChineseLivesMatter of Dr. Dao’s Vietnamese identity is only one example among many of Southeast Asian erasure in Asian diaspora narratives. The homogenization of Southeast Asian identities under an all-encompassing ‘Chinese’ label is one that has led to continual erasure of the nuanced ways in which racialization of Asian people affects different groups in different ways. For example, in discussions about the model minority myth and the wage gap, the disparity in wage earnings between Southeast Asians and East Asians has been neglected in the development of the myth of the ‘meritocratic’, and yet anti-Black and anti-brown nature of the American Dream. By framing Dr. Dao’s experience as one of a Chinese person, the hashtag 28 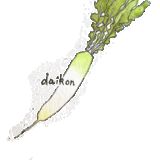