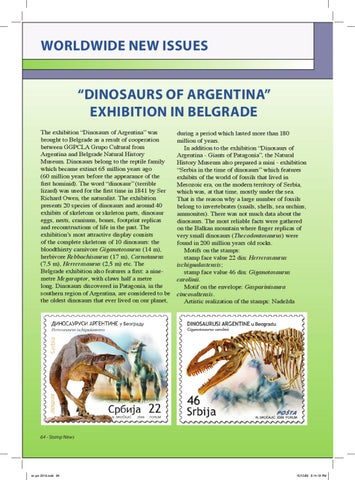 Worldwide New Issues “Dinosaurs Of Argentina” Exhibition In Belgrade The exhibition “Dinosaurs of Argentina” was brought to Belgrade as a result of cooperation between GGPCLA Grupo Cultural from Argentina and Belgrade Natural History Museum. Dinosaurs belong to the reptile family which became extinct 65 million years ago (60 million years before the appearance of the first hominid). The word “dinosaur” (terrible lizard) was used for the first time in 1841 by Ser Richard Owen, the naturalist. The exhibition presents 20 species of dinosaurs and around 40 exhibits of skeletons or skeleton parts, dinosaur eggs, nests, craniums, bones, footprint replicas and reconstructions of life in the past. The exhibition’s most attractive display consists of the complete skeletons of 10 dinosaurs: the bloodthirsty carnivore Giganotosaurus (14 m), herbivore Rebbachisaurus (17 m), Carnotaurus (7,5 m), Herrerasaurus (2,5 m) etc. The Belgrade exhibition also features a first: a ninemetre Megaraptor, with claws half a metre long. Dinosaurs discovered in Patagonia, in the southern region of Argentina, are considered to be the oldest dinosaurs that ever lived on our planet,

during a period which lasted more than 180 million of years. In addition to the exhibition “Dinosaurs of Argentina - Giants of Patagonia”, the Natural History Museum also prepared a mini - exhibition “Serbia in the time of dinosaurs” which features exhibits of the world of fossils that lived in Mesozoic era, on the modern territory of Serbia, which was, at that time, mostly under the sea. That is the reason why a large number of fossils belong to invertebrates (snails, shells, sea urchins, ammonites). There was not much data about the dinosaurs. The most reliable facts were gathered on the Balkan mountain where finger replicas of very small dinosaurs (Thecodontosaurus) were found in 200 million years old rocks. Motifs on the stamps: stamp face value 22 din: Herrerasaurus ischigualastensis; stamp face value 46 din: Giganotosaurus carolinii. Motif on the envelope: Gasparinisaura cincosaltensis. Artistic realization of the stamps: Nadežda