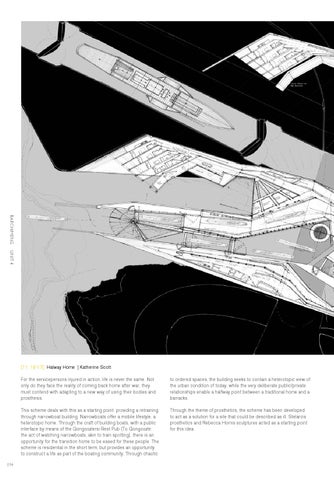 For the servicepersons injured in action, life is never the same. Not only do they face the reality of coming back home after war, they must contend with adapting to a new way of using their bodies and prosthesis.

to ordered spaces, the building seeks to contain a heterotopic view of the urban condition of today, while the very deliberate public/private relationships enable a halfway point between a traditional home and a barracks.

This scheme deals with this as a starting point: providing a retraining through narrowboat building. Narrowboats offer a mobile lifestyle, a heterotopic home. Through the craft of building boats, with a public interface by means of the GongoozlersĂ­ Rest Pub (To Gongoozle: the act of watching narrowboats, akin to train spotting), there is an opportunity for the transition home to be eased for these people. The scheme is residential in the short term, but provides an opportunity to construct a life as part of the boating community. Through chaotic

Through the theme of prosthetics, the scheme has been developed to act as a solution for a site that could be described as ill. StelarcĂ­s prosthetics and Rebecca HornĂ­s sculptures acted as a starting point for this idea.