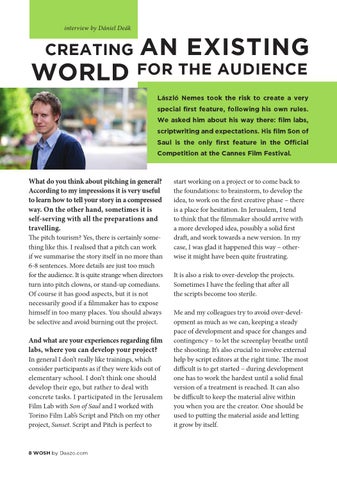 FOr THe auDieNCe László Nemes took the risk to create a very special ﬁrst feature, following his own rules. We asked him about his way there: ﬁlm labs, scriptwriting and expectations. His ﬁlm Son of Saul is the only ﬁrst feature in the Ofﬁcial Competition at the Cannes Film Festival.

What do you think about pitching in general? According to my impressions it is very useful to learn how to tell your story in a compressed way. On the other hand, sometimes it is self-serving with all the preparations and travelling. e pitch tourism? Yes, there is certainly something like this. I realised that a pitch can work if we summarise the story itself in no more than 6-8 sentences. More details are just too much for the audience. It is quite strange when directors turn into pitch clowns, or stand-up comedians. Of course it has good aspects, but it is not necessarily good if a filmmaker has to expose himself in too many places. You should always be selective and avoid burning out the project. And what are your experiences regarding film labs, where you can develop your project? In general I don’t really like trainings, which consider participants as if they were kids out of elementary school. I don’t think one should develop their ego, but rather to deal with concrete tasks. I participated in the Jerusalem Film Lab with Son of Saul and I worked with Torino Film Lab’s Script and Pitch on my other project, Sunset. Script and Pitch is perfect to

start working on a project or to come back to the foundations: to brainstorm, to develop the idea, to work on the first creative phase – there is a place for hesitation. In Jerusalem, I tend to think that the filmmaker should arrive with a more developed idea, possibly a solid first dra, and work towards a new version. In my case, I was glad it happened this way – otherwise it might have been quite frustrating. It is also a risk to over-develop the projects. Sometimes I have the feeling that aer all the scripts become too sterile. Me and my colleagues try to avoid over-development as much as we can, keeping a steady pace of development and space for changes and contingency – to let the screenplay breathe until the shooting. It’s also crucial to involve external help by script editors at the right time. e most diﬃcult is to get started – during development one has to work the hardest until a solid final version of a treatment is reached. It can also be diﬃcult to keep the material alive within you when you are the creator. One should be used to putting the material aside and letting it grow by itself.