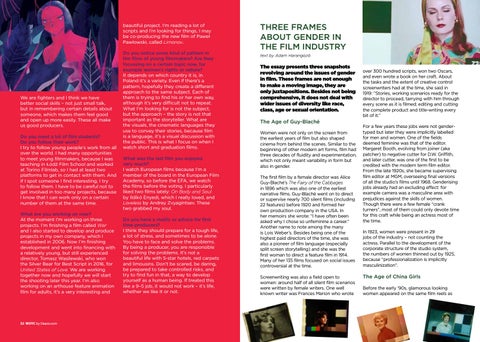 beautiful project. I’m reading a lot of scripts and I’m looking for things, I may be co-producing the new film of Paweł Pawłowski, called Limonov.

We are fighters and I think we have better social skills – not just small talk, but in remembering certain details about someone, which makes them feel good and open up more easily. These all make us good producers. Do you meet a lot of film students? Do you follow their work? I try to follow young people’s work from all over the world. I had many opportunities to meet young filmmakers, because I was teaching in Łódz ´ Film School and worked at Torino Filmlab, so I had at least two platforms to get in contact with them. And if I spot someone I find interesting, I try to follow them. I have to be careful not to get involved in too many projects, because I know that I can work only on a certain number of them at the same time. What are you working on now? At the moment I’m working on three projects. I’m finishing a film called War and I also started to develop and produce projects in my own company, which I established in 2006. Now I’m finishing development and went into financing with a relatively young, but still experienced director, Tomasz Wasilewski, who won the Silver Bear for Best Script in 2016, for United States of Love. We are working together now and hopefully we will start the shooting later this year. I’m also working on an arthouse feature animation film for adults, it’s a very interesting and

Do you notice some kind of pattern in the films of young filmmakers? Are they focussing on a certain topic now, for example women’s rights or nature? It depends on which country it is, in Poland it’s a variety. Even if there’s a pattern, hopefully they create a different approach to the same subject. Each of them is trying to find his or her own way, although it’s very difficult not to repeat. What I’m looking for is not the subject, but the approach – the story is not that important as the storyteller. What are the visuals, the cinematic languages they use to convey their stories, because film is a language, it’s a visual discussion with the public. This is what I focus on when I watch short and graduation films. What was the last film you enjoyed very much? I watch European films because I’m a member of the board in the European Film Academy, so before the EFA, we watch the films before the voting. I particularly liked two films lately: On Body and Soul by Ildikó Enyedi, which I really loved, and Loveless by Andrey Zvyagintsev. These two grabbed my soul. Do you have a motto or advice for first time producers? I think they should prepare for a tough life, a lot of stress, and sometimes to be alone. You have to face and solve the problems. By being a producer, you are responsible for solving the problems. It’s not a beautiful life with 5-star hotels, red carpets and limousins. Don’t be scared, be daring, be prepared to take controlled risks, and try to find fun in that, a way to develop yourself as a human being. If treated this like a 9–5 job, it would not work – it’s life, whether we like it or not.

The essay presents three snapshots revolving around the issues of gender in film. These frames are not enough to make a moving image, they are only juxtapositions. Besides not being comprehensive, it does not deal with wider issues of diversity like race, class, age or sexual orientation. The Age of Guy-Blaché Women were not only on the screen from the earliest years of film but also shaped cinema from behind the scenes. Similar to the beginning of other modern art forms, film had three decades of fluidity and experimentation, which not only meant variability in form but also in gender. The first film by a female director was Alice Guy-Blaché’s The Fairy of the Cabbages in 1896 which was also one of the earliest narrative films. Guy-Blaché went on to direct or supervise nearly 700 silent films (including 22 features) before 1920 and formed her own production company in the USA. In her memoirs she wrote: “I have often been asked why I chose so unfeminine a career.” Another name to note among the many is Lois Weber’s. Besides being one of the highest paid directors of the time, she was also a pioneer of film language (especially split screen storytelling) and she was the first woman to direct a feature film in 1914. Many of her 135 films focused on social issues controversial at the time. Screenwriting was also a field open to women: around half of all silent film scenarios were written by female writers. One well known writer was Frances Marion who wrote

over 300 hundred scripts, won two Oscars, and even wrote a book on her craft. About the tasks and the extent of creative control screenwriters had at the time, she said in 1919: “Stories, working scenarios ready for the director to proceed, tarrying with him through every scene as it is filmed; editing and cutting the complete product and title-writing every bit of it.” For a few years these jobs were not gendertyped but later they were implicitly labelled for men and women. One of the fields deemed feminine was that of the editor. Margaret Booth, evolving from joiner (aka patcher) to negative cutter for D.W. Griffith, and later cutter, was one of the first to be credited with the modern term film editor. From the late 1920s, she became supervising film editor at MGM, overseeing final versions of all the studio’s films until 1968. Genderising jobs already had an excluding effect: for example camera was a masculine area with prejudices against the skills of women. Though there were a few female “crank turners”, most of them could only devote time for this craft while being an actress most of the time. In 1923, women were present in 29 jobs of the industry – not counting the actress. Parallel to the development of the corporate structure of the studio system, the numbers of women thinned out by 1925, because “professionalization is implicitly masculinization”.

The Age of China Girls Before the early ‘90s, glamorous looking women appeared on the same film reels as