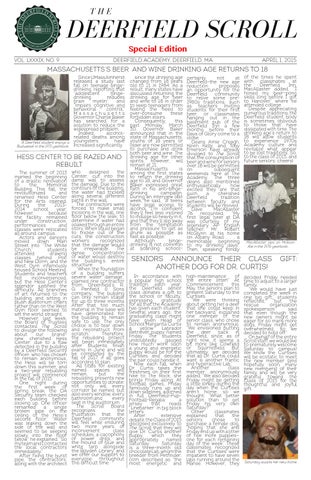 A Deerfield student enjoys a Budweiser in the 1971 yearbook.

Hess Center To Be Razed and Rebuilt The summer of 2013 marked the beginning of a drastic renovation to the Memorial Building. This fall, the revolutionized and renamed Hess Center for the Arts opened. During the 20132014 school year, however, because the facility remained under construction, performances and classes were relocated all around campus. Actors and dancers moved down Main Street into “The White Church,” students attended drawing classes behind Poc and New Dorm, and the West Gym infamously housed School Meeting. Students and teachers felt inconvenienced, but the Hess Center’s splendor justified the difficulty. All branches of art returned to the building, and sitting in plush auditorium chairs rather than on the West Gym floor seemed to set the world straight. However, last week, the Board of Trustees contacted The Scroll to divulge the following about our brandnew, cherished Hess Center: due to a flaw detected in the building by a Deerfield Security officer, who has chosen to remain anonymous, the Hess will be torn down this summer, and a two-year rebuilding project will commence in the fall of 2015. One night during the first week of spring break, the DA Security team checked each building before locking up. One officer remarked a single broken pipe on the ceiling of the Hess’s second floor. “Water was leaking down the side of the wall and seemed to be seeping slowly into the floor below,” he explained. “So my team and I contacted the local contractors immediately.” After fixing the burst pipe, the contractors, along with the architect

who designed the Center, cut into the damp wall to assess the damage. Due to the contours of the building, the water had trickled along several different paths in the wall. The contractors were forced to make small incisions in the wall, one floor below the leak, to determine if water had soaked through an entire story. When liquid began to trickle out of the cuts, the construction workers recognized that the damage would be irreparable. The dense concentration of water would destroy the building’s entire structure. “When the foundation of a building suffers severe water damage,” claimed one contractor from Greenfield’s R. G. Penfield & Sons company, “the building can only remain stable for up to three months After that, too much material in the base will have deteriorated for the building to remain safe to use. The only choice is to tear down and reconstruct from scratch.” Therefore, the rebuilding project will begin immediately after students finish exams in June and will be completed by the fall of 2017, if all goes according to plan. All titles for existing named spaces will remain, but the rebuilding presents new opportunities to donate: not only will every corridor be named, but also every window, every bathroom,and every seat in the auditorium. The Scroll Board recognizes the frustration that the Deerfield community will feel while enduring two more years of inconvenient class schedules, a cacophony of power drills, and the mound of blue and white tarp alongside the Boyden Library, and we offer our support to everyone throughout this difficult time.

since the drinking age changed from 18 years old to 21 in 1984. As a result, many states have discussed returning the drinking age for beer and wine to 18 in order to keep teenagers from feeling the need to over-consume these forbidden elixirs. Consequently, this past Monday, March 30, Governor Baker announced that in the state of Massachusetts, youths of 18 years or older are now permitted to purchase and drink both beer and wine. The drinking age for other spirits, however, will remain at 21. Massachusetts is among the first states to return the drinking age to 18, and Governor Baker expressed great faith in his anti-bingedrinking campaign. During an interview last week, he said, “If teens have legal access to alcohol, I’m confident they’ll feel less inclined to indulge so heavily in it, and that they’ll slip away from the temptation and pressure to get as drunk as possible as fast as possible.” Although bingedrinking is not common at boarding school–

certainly not at Deerfield–the new age reduction proposes an opportunity for the Deerfield community to relive some pre1980s traditions, such as teachers inviting students for their first beer, or classmates hanging out in the basement pub of the Deerfield Inn a few months before their Days of Glory come to a close. Deans Amie Creagh, Kevin Kelly, and Toby Emerson have already divulged to The Scroll that the consumption of beer and wine for seniors over 18 will be permitted on subsequent weekends here at The Academy. The three deans also mentioned enthusiastically how excited they are that such a cherished Deerfield tradition between faculty and students will be revived. Dave MacAllaster ’76 recounted, “My first ‘legal’ beer at DA was courtesy of my legendary AP English teacher, Mr. Robert McGlynn at his home on Albany Road . . . a memorable beginning to my drinking days.” Then, speaking fondly

of the times he spent with classmates at the Deerfield Inn, MacAllaster added, “I honed my beer-pong skills long before I got to Hanover,” where he attended college. Despite appreciating numerous traditions, the Deerfield student body is sometimes oblivious to those that have dissipated with time. The drinking age’s return to 18 will allow students to experience 1970s Academy culture and revitalize what appear to be lost traditions. So, to the class of 2015, and future seniors: cheers!

Seniors Announce Their Class Another Dog For Dr. Curtis! In accordance with a popular high school tradition, each year, the Deerfield senior class donates a gift to the school or faculty, expressing gratitude for all that the Academy has given each student. Several years ago, the graduating class might have given Head of School Margarita Curtis a yellow Labrador Retriever puppy named Friday. The students undoubtedly gauged how much work such a young and energetic puppy would be for the Curtises and decided the pair could handle it. Now, each fall, when Dr. Curtis takes the freshmen on their first hike to The Rock, she brings Friday along. At football games, Friday famously runs up and down sidelines, adorned in full Deerfield-PupFootball-Regalia: a jersey that reads “Linebarker” in big block letters. After extensive debate, the Class of 2015 disclosed exclusively to The Scroll that they will give Dr. Curtis another puppy, which they appropriately named Saturday. Saturday is a three-month old chocolate Lab, whom the breeder from Petfinder. com described as “the most energetic and

high-maintenance of the entire litter!” At Commencement this May, the seniors plan to present Saturday to the Curtises. “We were thinking about getting her a deer that she could keep in her backyard,” explained one member of the senior class, who chose to remain anonymous. “We envisioned putting the deer back in Deerfield, since, as of right now, it seems a bit more like Cowfield or Squirrelfield. But ultimately, we decided that all Dr. Curtis could want is another frantic and hyperactive Lab.” Another class member anonymously added, “We also decided Friday might be getting a little lonely during the day when the Curtises aren’t home, so we thought: ‘What better solution than to get Friday his very own Saturday?’” Other classmates explained that the seniors chose to purchase a female dog, “hoping that she and Friday end up with a litter of five more puppies— one for each remaining day of the week.” These classmates recognized that the Curtises were impatient to have seven labs running around the Manse. However, they

decided Friday needed time to adjust to a larger family. “We would have just completed the week in one big gift,” students reflected, “but the rescue organization spokesperson said that even though the new owners might be eager for so many more dogs, Friday might get overwhelmed, so we decided to hold off.” On behalf of the entire Scroll staff, we would like to prematurely welcome Saturday to campus! We know the Curtises will be ecstatic to meet the new member (and hopefully soon, many new members) of their family and will be very grateful toward the Class of 2015 for the thoughtful and joyful gift.