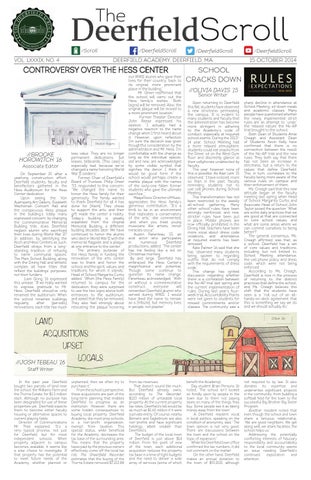 On September 19, after a yearlong construction effort, Deerfield students, faculty and benefactors gathered in the Hess Auditorium for the Hess Center dedication. Upon seeing the Von Auersperg Art Gallery, Elizabeth Wachsman Concert Hall and the conspicuous Hess plaque in the building’s lobby many expressed concern: by changing the commemorative Memorial Building title, does Deerfield neglect alumni who sacrificed their lives during World War II? In addition, by identifying the Koch and Hess Centers as such, Deerfield strays from a longstanding tradition of refusing to name communal spaces. The Main School Building, along with the Dining Hall and athletic complex all have titles that reflect the buildings’ purposes, not their funders. Liam Gong ’16 expressed this unease: “If we really wanted to express gratitude to Mr. Hess, Deerfield should’ve only renamed the auditorium. When the school renames buildings regularly, after [periodic] renovations, each title has much

Controversy Over the Hess Center

less value. They are no longer permanent dedications, but leases, billboards. [This case] is especially bad, because we’ve changed a name honoring World War II soldiers.” Former Chair of Deerfield’s Board of Trustees, Philip Greer ‘53, responded to this concern: “We changed the name to honor the Hess family for their generosity. The family wanted to thank Deerfield for all it has done for [them]. They chose to support the arts, and their gift made the center a reality. Today’s building is greatly expanded from the original Memorial Building, a different building decades later. We have continued to honor the alumni who died in World War II with the memorial flagpole and a plaque at one entrance to the center.” “The primary purpose of the Hess family in funding the renovation of the arts center was to thank and honor the school, and the spirit, values, and traditions for which it stands,” Head of School Margarita Curtis added. “When [the Hess Family] returned to campus for the dedication, they were surprised to see the two signs above both entrances to the auditorium, and asked that they be removed. They also feel strongly about relocating the plaque honoring

our WWII alumni who gave their lives for their country, back to its original, more prominent place in the building.” Mr. Greer reaffirmed that the school will carry out the Hess family’s wishes, “Both [signs] will be removed. Also, the original plaque will be moved to a more prominent location.” Former Theater Director John Reese expressed his opinion: “I actually had a negative reaction to the name change when I first heard about it. However, upon reflection I’m sure the decision was given thoughtful consideration by the administration and Mr. Hess. I’m comfortable with the change as long as the individual spaces, old and new, are acknowledged by some visible symbol that signifies the donor. I think it would be good form if the school would perhaps create a marble plaque with the names of the sixty-one fallen former students who gave the ultimate sacrifice. ” Maaja Roos, Director of Music, appreciates the Hess family’s generous contribution. “It’s a thrill to be in an environment that replicates a conservatory of the arts,” she commented, “and when you treat young musicians like artists, minor miracles occur.” Austin Parenteau ’15, an avid actor who participates in numerous Deerfield productions, added, “The center has me feeling like a kid on Christmas morning.” By and large, Deerfield has embraced the Hess Center’s magnificence and potential. Though some continue to question its name change, Parenteau acknowledged, “With or without a commemorative construct, everyone will remember Deerfield alumni who served during WWII. I would have liked the name to remain as a [tribute], but memory lives in people, not plaster.”

Upon returning to Deerfield this fall, students have observed a new strictness permeating the campus. It is evident to many students and faculty that the administration has become more stringent in adhering to the Academy’s code of conduct, especially at required school events. During the 201314 year, School Meeting had a more relaxed atmosphere: students could eat snacks from the Greer, sit on the West Gym floor and discreetly glance at their cellphones undetected by faculty. This year, however, none of this is possible. As Alan Lam ’15 observed, “I have noticed ,more so than in the past, faculty reminding students not to use cell phones during School Meeting.” This transformation has not been restricted to the weekly all-school gathering. Many other school rules have been strongly reinforced, and new, stricter rules have been put in place. Mobile phones are now officially prohibited in the Dining Hall, teachers have been more vocal about dress code violations, and attendance at required events has been stressed. Kate Palmer ’16 said that she has “observed many students being spoken to regarding outfits that do not comply with the requirements of dress code.” This change has ignited discussion regarding whether there is a correlation between the No-AP trial last spring and the current implementation of rules. During last year’s fourweek trial, Accountability Points were not given to students for missed commitments and/or classes. The community saw a

sharp decline in attendance at School Meeting, sit-down meals and academic classes. Many people have questioned whether the newly implemented strict rules are an attempt to “undo” the relaxed nature the No-AP trial brought to the school. Both Dean of Students Amie Creagh and Assistant Dean of Students Kevin Kelly have confirmed that there is no connection between the result of the No-AP trial and the new rules. They both say that there has not been an increase in strictness, but a return to the values that define Deerfield. This, in turn, correlates to the faculty being more aware of the various rules on campus and their enforcement of them. Ms. Creagh said that this new attitude began at the faculty meeting last spring when Head of School Margarita Curtis and Associate Head of School John Taylor posed the question “What are some daily practices that we are good at that are connected to core school values, and what are some areas where we can commit ourselves to being better?” The general consensus, Ms. Creagh affirmed, was that, as a school, Deerfield has a set of core values and traditions, including, but not limited to, School Meeting attendance, the cell phone policy and dress code, which were not being enforced. According to Ms. Creagh, Deerfield is now in the process of returning to the distinct practices that define the school, and Ms. Creagh believes this shift that the students have seen is a “roll out of an allhands-on-deck agreement that this is something we say we do and we should actually do.” Chloe So

//JOSH TEBEAU ‘16 Staff Writer In the past year, Deerfield bought two parcels of land near the school: the Williams Farm and the Thorne Estate, for $1.5 million each. Although no purpose has been designated for use of these properties yet, Deerfield expects them to become either faculty housing or alternative spaces to current playing fields. Director of Communications Mr. Thiel explained, “It’s a very typical process, not just for Deerfield, but for most independent schools. When property adjacent to campus becomes available, it seems like a wise choice to investigate. If that property has the potential to meet future needs of the Academy, whether planned or

unplanned, then we often try to purchase it.” From the school’s perspective, these acquisitions are part of the long-term planning that enables Deerfield to progress as an institution. However, there are some hidden consequences to buying local property. Deerfield Academy, like most prep schools, is a non-profit organization, exempt from taxation. This special status, while beneficial for the Academy, decreases the tax base of the surrounding area. This means that the property taxes paid by the previous owners effectively come off the local tax roll. The Greenfield Recorder estimates that the buying of the Thorne Estate removed $7,153.88

from tax revenues. That doesn’t sound like much. But Deerfield already owns, according to The Recorder, $120 million of untaxable local property. At the current property tax rates, Deerfield’s bill would be as much as $1.65 million if it were a private entity. Of course, nearby Bement and Eaglebrook are also non-profits and have significant holdings, albeit smaller than Deerfield’s. The budget of the local town of Deerfield is just above $14 million. From the point of view of the town, each additional acquisition reduces the property tax base in a time of tight budgets and the need to deliver a wide array of services (some of which

benefit the Academy). Day student Brian Persons ’16 noted, “The school isn’t looked so fondly upon by people in the town due to them not paying taxes on many of the things they buy. Some people see it as taking money away from the town.” A Deerfield resident vocal in local politics, speaking on the condition of anonymity, said, “The town opinion is not very good. There are discussions between the town and the school on the topic of expansion.” While the Deerfield town office confirmed the tax numbers, it did not comment on the matter. On the other hand, Deerfield makes an annual donation to the town of $91,000, although

not required to by law. It also donates its expertise and underwrites significant projects in the community, from building a softball field for the town to the successful Big Brother Big Sister Program. Another resident noted that even though the school and town share a tenuous relationship, “We are good neighbors. We get along well, we share facilities, the school helps us.” Addressing the potentially conflicting interests of fiduciary responsibility and accountability to the local community seems an issue needing Deerfield’s continued exploration and attention.