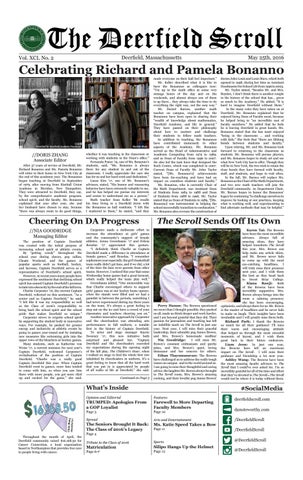 //DORIS ZHANG Associate Editor After 37 years of service at Deerfield, Mr. Richard Bonanno and Ms. Pamela Bonanno will retire to their home in New York City at the end of this academic year. The Bonannos began teaching at Deerfield in September of 1979, after moving from Kimball Union Academy in Meriden, New Hampshire. They were attracted to Deerfield, they say, by the comprehensive academic program, school spirit, and the faculty. Ms. Bonanno explained that year after year, she and her husband have chosen to stay, because “there was always room to do good things,

whether it was teaching in the classroom or working with students in the Dean’s office.” Fernanda Ponce ’19, one of Ms. Bonanno’s students, said, “Ms. Bonanno is always there for any student in and out of the classroom. I really appreciate the care she has for us and her hard work and dedication.” Lucas Kim ’17, one of Mr. Bonanno’s advisees, stated, “His humor and reassuring behavior have been extremely valuable to me, and he has helped me pursue my interests and seems to understand me as a person.” Math teacher Sean Keller ’86 recalls his time living in a Deerfield dorm with the Bonannos as hall residents. “I felt like I mattered to them,” he stated, “and they

Carpenter made a deliberate effort to increase the attendance at girls’ games and the community’s support of female athletes. Jenna Greenbaum ’17 and Felicia Renelus ’17 appreciated this gesture. “I definitely think Charlie as Captain Deerfield made a difference in attendance at female games,” said Renelus. “I remember sophomore year especially, the girl’s basketball team really didn’t get fans, and if we did, a lot of the time the fans were parents from other teams. However, I noticed this year that some Wednesday home games had a great turnout, which really helped the team play well.” Greenbaum added, “One memorable way that Charlie encouraged others to support girls’ games was at our hockey home opener, when the stands were filled and we had a gauntlet in between the periods, something I had never experienced during my three years on the team. It’s always a great feeling to step out on the ice and have a crowd of your classmates and teachers cheering you on.” Another innovative approach by Carpenter and the cheerleaders was attending arts performances in full uniform, a notable first in the history of Captain Deerfield. To actor and stage manager Kaycie Sweeney ’17, this new initiative both surprised and pleased her. “Captain Deerfield and the cheerleaders exceeded my expectations during the opening night of the fall play, The Children’s Hour, when I walked on stage to find the whole first row inhabited by cheerleaders in uniform. It’s a great feeling to know that all the hard work that you put in is appreciated by people of all walks of life at Deerfield,” she said. Continued on Page 5

made everyone on their hall feel important.” Mr. Keller described what it is like to have the Bonannos as colleagues now: “I’m up in the math office at some very strange hours of the day and on the weekends, and almost always one of them is up there… they always take the time to do everything the right way, not the easy way.” Mr. Darnel Barnes, another math teacher on campus, explained that the Bonannos have been open to sharing their “wealth of knowledge about mathematics, Deerfield Academy, and life in general.” They have passed on their philosophy about how to nurture and challenge their students to fellow math teachers. In addition to teaching, the Bonannos have contributed immensely to other aspects of the Academy. Mr. Bonanno served as the Head of Administrative and Academic Computing from 1979 to 1989, and as Dean of Faculty from 1996 to 2007. He also led the task force that designed the Koch Center, which was completed in 2007. Current Dean of Faculty Mr. John Taylor stated, “[Mr. Bonanno’s] achievements have been far-reaching and have had an impact on countless students and faculty.” Ms. Bonanno, who is currently Chair of the Math Department, was Assistant Dean of Students from 1984 to 1988 and Dean of Students from 1988 to 1996. Mr. Taylor stated that as Dean of Students in 1989, “[Ms. Bonanno] was instrumental in helping the school successfully transition to coeducation.” Ms. Bonanno also oversaw the construction of

The Scroll Sends Off Its Own

Perry Hamm: The Browns questioned me more than I thought possible; they pushed us all, made us think deeper and work harder, and I am beyond grateful that they did. Their passion for journalism and teaching has left an indelible mark on The Scroll in just one year. Next year, I will miss their graceful leadership, their adorable pug James Brown, and Mrs. Brown’s homemade muffins! Nia Goodridge: I will miss Mr. Brown’s constant enthusiasm and quirky jokes, and Mrs. Brown’s quiet, loving demeanor and her concern for others. Ethan Thayumanavan: The Browns have challenged us to address the really tough issues on campus and in the world around us. I am going to miss their thoughtful and caring advice, the laughter Mr. Brown always brought to The Scroll room, Mrs. Brown’s amazing cooking, and their lovable pug James Brown!

TRUMPED: Apologies From a GOP Loyalist

The Seniors Brought It Back: The Class of 2016’s Legacy

Karen Tai: The Browns have been the most incredible advisors. Always full of amazing ideas, they have helped transform The Scroll this year. Mrs. Brown can help make any article shine, and Mr. Brown never fails to come up with the most eye-catching headlines. I will truly miss their presence next year, and I wish them the best as they head back to Sweet Briar College. Kiana Rawji: Both of the Browns have been incredibly supportive. Mrs. Brown always brings into the room a calming presence; she has been encouraging, optimistic, and always there for us. Mr. Brown is the master of headlines and he never fails to make us laugh. Their insights have been invaluable and I will greatly miss them both. Richard Park: I thank the Browns so much for all their guidance! I’ll miss their warm and encouraging attitude that helped us through the most stressful moments of layout, and I wish them good luck in their future endeavors. Liam Jeon: In just one year, the Browns have left an enormous impact on The Scroll. I will miss their guidance and friendship a lot next year. Ashley Wang: The Browns have been the most amazing faculty advisors to The Scroll that I could’ve ever asked for. I’m so incredibly grateful for all of the time and effort that they’ve devoted to The Scroll—The Scroll would not be where it is today without them.

Throughout the month of April, the Deerfield community raised $16,168.50 for Cancer Connection, a local organization based in Northampton that provides free care to people living with cancer.

dorms John Louis and Louis Marx, which both opened in 1998, during her time as Assistant Headmaster for School Life from 1996 to 2003. Mr. Taylor stated, “Besides Mr. and Mrs. Boyden, I don’t think there is another couple in the history of the school that has… given so much to the Academy.” He added, “It is hard to imagine Deerfield without them.” In the many roles they have taken on at Deerfield, Mr. Bonanno explained that he enjoyed being Dean of Faculty most, because he helped bring in “an incredible cast of faculty members.” He added that he feels he is leaving Deerfield in great hands. Ms. Bonanno stated that she has most enjoyed “being in the classroom … and working with kids.” She feels that “there are lifelong bonds between students and faculty.” Upon retiring, Mr. and Ms. Bonanno look forward to returning to the classroom as students. Mr. Bonanno will pursue physics, and Ms. Bonanno hopes to study art and see what New York City has to offer. Though they will be in New York, the two wish to retain the close bonds they have formed with faculty, staff, and students, and hope to visit often. In the fall, Mr. Barnes will replace Ms. Bonanno as the Chair of the Math Department, and two new math teachers will join the Deerfield community. As Department Chair, Mr. Barnes hopes to honor the Bonannos’ legacy by continuing “to challenge ourselves to improve by looking at our practices, keeping what is working well, and experimenting to find alternate methods that may be helpful.”

Silipo Hangs Up the Helmet Page 12