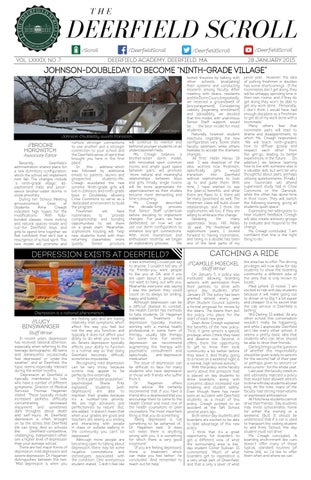 Associate Editor Recently, Deerfield’s administration shared plans for a new dormitory configuration, which the school will implement next fall. The changes include “a ninth-grade village,” allsophomore halls and juniorsenior brother-sister dorms in close proximity. During her School Meeting announcement, Dean of Students Amie Creagh indicated high hopes for the modifications: “With fullybonded classes, more inviting and natural spaces—inside and out—for Deerfield boys and girls to spend time together, we feel confident that we’ll see a resurgence of school spirit. This new model will promote and

nurture stronger connections to one another and a stronger connection to your school and the Deerfield sense of spirit that brought you here in the first place.” In this address—which was followed by additional emails to parents, alumni and prospective students—Ms. Creagh elucidated the new scheme. Ninth-grade girls will live in Johnson, and ninth-grade boys in Doubleday, allowing Crow Commons to serve as a “dedicated environment to build the program.” Freshmen will have roommates to “provide companionship and bonding opportunities to set them on a great start.” Meanwhile, sophomore housing will “help new students bond with their returning classmates more quickly.” Senior proctors

will continue to mentor and befriend younger students on all underclassmen halls. Ms. Creagh believes a brother-sister dorm model, with renovated open common rooms and ample quad space between pairs, will promote “more natural and meaningful relationships” between boys and girls. Finally, single rooms will be more appropriate for upperclassmen as their studies become more demanding and time-consuming. Ms. Creagh described the decade-long process that Senior Staff undertook before deciding to implement changes: “For years, we have deliberated on how we can use our dorm configuration to enhance boy-girl connections. With more momentum and enthusiasm recently, we began an exploratory process . . . We

Depression is a national phenomenon.

//LUCY BINSWANGER Staff Writer In recent years, depression has received national attention, especially when referring to the teenage demographic. All teens and adolescents occasionally feel “depressed” or “under the weather,” and at Deerfield, the topic seems especially relevant during the winter months. “Depression at Deerfield is typically manifested by kids who have a number of different symptoms,” Director of Medical Services Thomas Hagamen stated. “These typically include increased sadness, difficulty concentrating, decreased enjoyment and sometimes dark thoughts about death and self—injury. At Deerfield, depression is often brought on by the stress that Deerfield life can bring. And so schools like Deerfield–competitive, challenging, independent–often see a higher level of depression than your average school.” There are two major forms of depression: mild depression and severe depression. Dr. Hagamen distinguishes between the two: “Mild depression is when you

are feeling sad, and are having relatively mild symptoms which affect the way you feel but not the way you function; and typically it does not affect your ability to do what you need to do. Severe depression typically affects your ability to function in a normal way so that doing Deerfield becomes difficult, sometimes impossible.” Recognizing mild depression can be very tricky, because victims may appear to be perfectly fine externally. “In this particular population,” psychologist Sheila Fritz explained, “students [with depression] are able to maintain their grades because it’s a number-one priority. We are high achievers and perfectionists by nature.” But, she added, “it doesn’t mean that when your grades are good and teachers are seeing you smiling and interacting with people in class or outside walking in the community you can’t be depressed.” Although more people are becoming open to talking about depression, there may be some negative connotations and stereotypes associated with the condition. One anonymous student stated, “I didn’t feel like

it was something I could just say to anyone. I couldn’t tell any of my friends—you want people to like you at DA, and if you are open about it, people will not want to hang out with you. Meanwhile everyone was saying I was the person they could count on to always be smiling, happy and bubbly.” Although depression can be a difficult disease to combat, the Health Center has methods to help students. Dr. Hagamen explained, “Treatment for depression typically involves working with a mental health professional in some form of therapy, usually talk therapy for some time. For severe depression we recommend augmenting this therapy with psychiatric consultment and specifically anti-depression medication.” The issue of depression can be difficult to face for many students who have depression or those with friends who suffer from it. Dr. Hagamen offers some advice: “We certainly recommend that if you have a friend who is depressed that you encourage them to come to the Health Center and meet one of the health counselors or peer counselors. The most important thing is that you do something.” “Being depressed is not something to be ashamed of,” Dr. Hagamen said. “It does not mean there is anything wrong with you, it is something for which there is very good treatment.” “If you are feeling depressed, there is treatment which can make you feel better,” he concluded. “And remember to reach out for help.”

tested theories by talking with other schools, [evaluating] their systems and conducting research among faculty. After meeting with deans, residents and the Dorm Council repeatedly, we received a groundswell of [encouragement]. Considering viability [regarding enrollment] and advisability, we decided that this model, with unanimous Senior Staff support, would be . . . the best model for most students.” Naturally, however, student reactions regarding the new configuration vary. Some share faculty optimism, while others hesitate to accept the dramatic changes. “At first,” Hollin Hanau ’18 said, “I was skeptical of the idea, worried how freshmen, specifically girls, would transition into Deerfield without sophomores to look up to and guide them. With time, I have started to see the [plan’s] benefits, and while there are flaws to it, there will be many [positives] as well. The freshmen class will build closer relationships, and I think the sophomores will too, if they are willing to embrace this change.” Speaking for many upperclass boys, Hill Kelley ’16 said, “My freshmen and sophomore years, I looked forward to having roommates, and being in a double has been one of the best parts of my

junior year. However, the idea of putting freshmen in doubles has some shortcomings. If the roommates don’t get along, they will be unhappy spending time in their own rooms, and if they do get along they won’t be able to get any work done. Personally, I don’t think I would have had enough discipline as a freshman to get all of my work done with a roommate.” Many others fear that roommate pairs will lead to drama and disappointment, to which Ms. Creagh responded, “We will teach ninth-graders how to diffuse gossip and respect each other from the get-go, leading to better experiences in the future. . . [In addition,] we believe learning how to live with someone else is a valuable skill, but we’ll be very thoughtful about pairs, perhaps utilizing questionnaires. [Finally,] one roommate will attend supervised study hall in Crow Commons or the Garonzik, while the other has alone-time in their room. They will switch the following evening, giving all students quiet space.” Expressing her willingness to hear student feedback, Creagh will also create advisory groups to evaluate and respond to the change. Ms. Creagh concluded, “I am confident that this is the right thing to do.”

On January 5, a policy was instituted allowing boarding seniors, with permission from their parents, to drive with senior day students after January 19. The policy has been granted almost every year after Student Council submits a formal proposal for review by the deans. The deans then put the policy into place for the start of each new year. Dean Amie Creagh explained the benefits of the new policy: “First, it gives seniors a special privilege, when I think they need and deserve one. Second, it offers them the opportunity to get to know their local community a bit better before they leave it. And finally, going to a movie on a weekend night is a normal, high-school activity.” With this policy, some faculty worry about the pressure that is placed on day students to drive boarders, along with concerns about increased rule breaking and student safety. Even though there has never been an accident with Deerfield students as a result of this policy, Creagh pointed to an accident at the Taft School several years ago. Both senior day students and boarders are excited to be able to take advantage of this new policy. “I think that it’s a great opportunity for boarders to get a different view of what the surrounding area is like,” day student Conor Sullivan ’15 commented. “Much of what boarders get to experience is a very small part of Greenfield, and that is only a sliver of what

the area has to offer. The driving privileges will now allow for day students to show the boarding community a different side of the area that is only known to locals.” Madi Lyford ‘15 noted, “I am excited to ride with day students because it will make going out to dinner or to Big Y a lot easier and cheaper. It is no secret that the cab service in Deerfield is lacking.” Will Darling ‘15 added, “At any other school this conversation wouldn’t really be happening, and while I appreciate Deerfield isn’t like every other school, it seems a pretty basic idea that students who can drive should be able to drive their friends.” Darling brings up the question of whether this responsibility should be given solely to seniors for the second half of their year or perhaps given to seniors—or even juniors— for the whole year. Last year, the faculty voted on and ultimately rejected a policy that would have allowed seniors to drive with day students all year long. At the time, many of the faculty had strong reservations or expressed ambivalence. At Hotchkiss students cannot drive their friends: “Day students may invite schoolmates home for either the evening or a weekend. [But] It should be understood that if a car is used to transport the visiting student to and from School, the day student must not drive.” Ms. Creagh concluded, “A boarding environment like ours doesn’t offer many of those typical, standard routines [of home life], so I’d like to offer them when and where we can.”