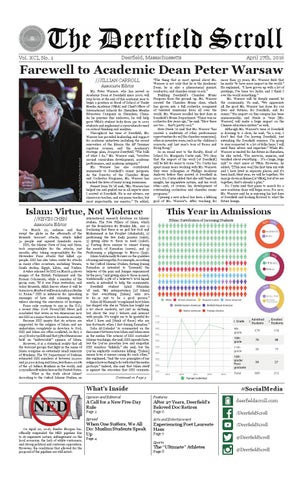 //JILLIAN CARROLL Associate Editor Mr. Peter Warsaw, who has served as Academic Dean at Deerfield since 2007, will step down at the end of this academic year to begin a position as Head of School at Vanke Meisha Academy (VMA) and Chief Officer of International Schools for Shenzhen Meisha Education Company in Shenzhen, China. As he pursues this endeavor, he will help grow VMA’s student body from 150 to 1000 students and implement a curriculum focused on critical thinking and analysis. Throughout his time at Deerfield, Mr. Warsaw has provided leadership and support for academic initiatives including the recent renovation of the library, the AP Seminar capstone courses, and the Academy’s strategic plan, Imagine Deerfield. “The bulk of what I do,” Mr. Warsaw said, “revolves around curriculum development, academic performance, and academic integrity.” Mr. Warsaw has also contributed immensely to Deerfield’s music program. As the Director of the Chamber Music and Orchestra Programs, Mr. Warsaw has touched the lives of many young musicians. Pianist Sean Yu ’18 said, “Mr. Warsaw has helped me and guided me in all aspects since I arrived at Deerfield. He is my advisor, my classroom teacher, and my piano teacher, but most importantly, my mentor.” Yu added,

“The thing that is most special about Mr. Warsaw is not only that he is the Academic Dean, he is also a phenomenal pianist, conductor, and chamber music coach.” Building Deerfield’s Chamber Music Program from the ground up, Mr. Warsaw created the Chamber Music class, which has grown into a full orchestra comprised of talented musicians from all over the world. Mr. Warsaw recalled his first days in Deerfield’s Music Department. “There was no orchestra five years ago,” he said. “Now there are two … that’s pretty cool.” Nate Steele ’17 said that Mr. Warsaw “has created a multitude of other performance opportunities for us [the chamber musicians], often in inventive ways, such as the children’s concerts, and last year’s tour of Korea and Hong Kong.” In an email sent to the faculty, Head of School Dr. Margarita Curtis said, “It’s clear that the impact of his work [at Deerfield] will be felt for years to come.” Dr. Curtis has spent many years working with Mr. Warsaw; they were colleagues at Phillips Academy Andover before they arrived at Deerfield in 2007. Dr. Curtis added that she will “miss his insight, his inquisitive nature, and his work ethic—and, of course, his development of outstanding orchestras and chamber music programs.” Opening a new school has been a lifelong goal of Mr. Warsaw’s. After teaching for

Islam: Virtue, Not Violence //KEVIN CHEN Associate Editor On March 22, sadness and fear swept the globe in the aftermath of the Brussels terrorist attacks, which killed 31 people and injured hundreds more. ISIS, the Islamic State of Iraq and Syria, took responsibility for the attacks, just months after taking responsibility for the November Paris attacks that killed 130 people. ISIS has also taken credit for attacks in many other countries, including Yemen, Saudi Arabia, Egypt, Libya, and Turkey. A video released by ISIS on March 4 shows images of the British Parliament and the Roman Colosseum, while a member of the group says, “If it was Paris yesterday, and today Brussels, Allah knows where it will be tomorrow. Maybe it will be in London or Berlin or Rome.” ISIS is infamous for spreading messages of hate and releasing violent videos showing the executions of hostages. Fears only continue to rise in the U.S.; a recent New York Times/CBS News poll concluded that seven in ten Americans now see ISIS as a major threat to domestic security. Because ISIS insists that its actions are supported by the religion of Islam and are undertaken completely in devotion to God, ISIS and Islam are often conflated. In fact, a 2015 YouGov poll found that 55% of Americans hold an “unfavorable” opinion of Islam. However, it is a statistical reality that all the terrorist groups that fight in the name of Islam comprise an extremely small minority of Muslims. The US Department of Defense estimated ISIS numbers at between 20,000 and 30,000 in Iraq and Syria, less than 0.002% of the 1.6 billion Muslims in the world, and 2.75 million Muslims here in the United States. What is the truth about Islam? According to the Oxford Islamic Studies, an

This Year in Admissions

international research database on Islamic studies, The Five Pillars of Islam, which set the foundation for Muslim life, are: 1) Declaring that there is no god but God and Muhammad is his Prophet (shahadah), 2) performing the five daily prayers (salat), 3) giving alms to those in need (zakat), 4) Fasting from sunrise to sunset during the month of Ramadan (sawm), and 5) Performing a pilgrimage to Mecca (hajj). Islam traditionally focuses on the qualities of caring and empathy. For example, according to the Oxford Islamic Studies, fasting during Ramadan is intended to “[remind] the believer of the pain and hunger experienced by the poor,” and giving alms to those in need, traditionally 2.5% of a believer’s total liquid assets, is intended to help the community. Deerfield student Iqbal Nurjadin ’18 said, “My interpretation [of Islam] is that everything [Islam] asks you to do…is just to be a good person.” Saher Al-Khamash ’17 explained how Islam has shaped who she is: “Islam has taught me a lot about modesty, not just in clothing, but about the way I behave and interact with people. It’s taught me to be grateful for what I have and [think of those] who are less fortunate when I fast during Ramadan.” Saba Al-Qubailat ’17 commented on the disconnect between true Islam and Islam seen in the media: The actions of ISIS contradict Islamic teachings, she said. ISIS spreads hate, but the Qur’an preaches love and empathy; ISIS murders “infidels,” she said, but the Qur’an explicitly condemns killing. “[Islam] means love; it means caring for each other,” she explained, “and the core principles of my religion have nothing to do with what the media portrays.” Indeed, she said that Islam itself is against the atrocities that ISIS commits.

On April 20, 2016, Kinder Morgan Inc. officially suspended the NED pipeline due to its expensive nature, infringement on the local economy, the lack of utility customers, and strong political and customer opposition. However, the conditions that allowed for the proposal of the pipeline are still intact.

more than 35 years, Mr. Warsaw feels that he needs “to have more impact in the world.” He explained, “I have grown up with a lot of privilege, I’ve been too lucky, and I think I owe the world something.” Mr. Warsaw will be deeply missed by the community. Yu said, “We appreciate all the good Mr. Warsaw has done for our lives and futures, for Deerfield, and for music.” His impact on this campus has been immeasurable, and Steele is “sure [Mr. Warsaw] will make a huge impact on the Chinese education system” as well. Although Mr. Warsaw’s time at Deerfield is drawing to a close, he said, “In a way, I don’t feel that I’m leaving Deerfield, just extending the Deerfield mission. I’m going to stay connected to a lot of folks here; I will need their advice and expertise.” While Mr. Warsaw is excited for his future in Shenzhen, he also noted, “I’m nervous, anxious, and terrified about everything … It’s a huge, huge risk” to start anew at VMA. However, he added, “[This year was] the first time my wife and I have lived in separate places, and it’s been hard. Next year, we will be together. We may go down in flames [at VMA], but if we are together, that’s already a plus.” Dr. Curtis said that plans to search for a new academic dean will begin soon. For now, Mr. Warsaw said he is enjoying his last days at Deerfield and looking forward to what the future brings.

A Call for a New Five-Day Rule

When One Suffers, We All Do: Muslim Students Speak Up