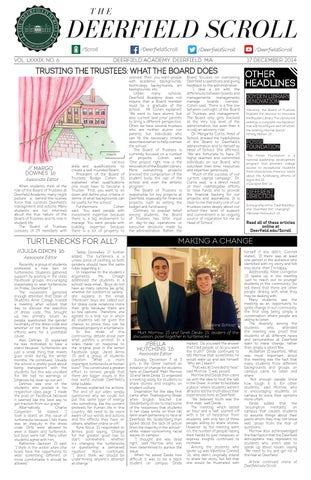 Trusting the trustees: What the Board does

various skills and qualifications to create a well-rounded Board. President of the Board of Trustees Rodgin Cohen ‘61 explained what qualifications one must have to become a Trustee: “First, you want to sit down and define your criteria in terms of what backgrounds can be useful for the school.” Furthermore, Cohen said, “You want people with investment expertise because there is a big endowment to manage. You want people with building expertise because there is a lot of property to

oversee. Then, you want people with academic backgrounds, technology backgrounds, art backgrounds, etc.” Unlike many schools, Deerfield Academy does not require that a Board member must be a graduate of the school. Mr. Cohen explained, “We want to have alumni, but also current and prior parents to bring a different perspective. Often we have several trustees who are neither alumni nor parents, but individuals who can fit the necessary criteria described earlier to help oversee the school.” The Board of Trustees is currently focused on a number of projects. Cohen said, “One project right now is the renovation of the Boyden Library. More overarching projects [involve] the composition of the student body, the size of the school and even the athletic program.” The Board of Trustees is responsible for key projects at Deerfield, especially for financial projects, such as setting the budget and fundraising. Contrary to popular belief among students, the Board of Trustees has little input on day-to-day operations or executive decisions made by the administration. Rather, the

Associate Editor Recently, a group of students protested a new ban on turtlenecks. Students gathered support by posting in the class Facebook groups, encouraging classmates to wear turtlenecks on Friday, December 5. The movement garnered enough attention that Dean of Students Amie Creagh hosted a meeting after school that day to discuss the specifics of dress code. This brought up two primary issues as people questioned the gender neutrality of the dress code and whether or not the protesting efforts were for a justifiable cause. Alex DeVries ’15 explained he was motivated to take a stand because “turtlenecks are just a small thing that makes guys smile during the winter months.” He continued, “Usually the school is pretty good about being transparent with the students, but this was uncalled for. We had no warnings or [chances to] clean up our act.” DeVries was one of the students who posted in his respective class page: “I made the post on Facebook because it seemed like the best way to get traction from our grade.” Alternatively, Charlie Carpenter ’16 stated, “I took a stand on this issue of turtlenecks because I felt there was an inequity in the dress code. Girls were allowed to wear a blazer and turtleneck, but boys were not.” Many other students agree with him. Katherine Jackson ’15 said, “I think in the winter when [the boys] have the opportunity to wear something different or more comfortable it should be allowed.”

Teddy Donnelley ’17 further added, “The turtleneck is a unisex piece of clothing so both genders should have the same rules regarding it.” In response to the student’s arguments, Ms. Creagh addressed the students in a school-wide email. “Boys do not have as many options [as girls], whether for comfort or variety,” she explains in the email. “Moreover, boys are ‘called out’ for dress code violations more than girls because there are so few options.” Therefore, she agreed to a trial run in which all students will be given the chance to prove they can be dressed properly in a turtleneck. In the midst of this controversy, debate arose over what justifies a protest. In a video made on response to the original post in the senior Facebook page, Jared Arms ’15 and a group of students question: “What is more important, turtlenecks or human lives?” This constituted a greater effort to remind people that there are bigger issues in the real world outside Deerfield’s little bubble. Armes explained his actions: “The end of our video simply questioned why we could not put this same type of energy into something like the current protests for human life in this country. We need to be more aware of our words and actions and the effects they have on others, whether online or off.” Kyra Kocis ’15 responded to Armes’ post saying, “Change for the greater good has to start somewhere, whether it’s changing the turtlenecks or questioning a perceived injustice.” Kocis continued, “I don’t think we should be undermining anyone’s attempt at change.”

OTHER HEADLINES BOYDEN LIBRARY RENOVATION “Recently, the Board of Trustees finalized the decision to renovate the Boyden Library. The Library will undergo a complete revitalization that will reconfigure and refurbish the existing internal layout.” //Emily Mahan ‘15

“ “The Posse Foundation is a national leadership development program that provides college access to exceptional students from cities across America.” Learn about the fundraising efforts of Signe Ahl ‘15. //Caroline Fett ‘16

“ Is the profile of the “Deerfield Boy” and “Deerfield Girl” changing? //Brooke Horowitch ‘15

Read all of these articles online at Deerfield.edu/Scroll

Turtlenecks for all? //JULIA DIXON ‘16

Board focuses on overseeing Deerfield’s operations and giving feedback to the administration. “I deal a lot with the differences between boards and managements: managements manage, boards oversee,” Cohen said. “There is a fine line between oversight of the Board of Trustees and management. The Board only gets involved at the very top level of the administration, but even then it is only an advisory role.” Dr. Margarita Curtis, Head of School, praised the helpfulness of the Board to Deerfield’s administration and to herself as Head of School. She affirmed, “We are fortunate to have 29 highly talented and committed individuals on our Board, who volunteer their time, resources and expertise generously.” “Much of the success of our current capital campaign,” Dr. Curtis said, “is a direct result of their indefatigable efforts to raise funds and to provide the financial backing for our projects and aspirations. It is clear to me that every one of our trustees cares deeply about our school—their level of support and commitment is an ongoing source of inspiration for me as Head of School.”

Matt Morrow ‘15 and Tarek Deida ‘15, leaders of the discussion, pose together in turtlenecks.

Sunday, December 7, at 3 p.m, in the Greer marked an initiation of change for students here at Deerfield. Matt Morrow ‘15 and Tarek Deida ‘15 organized a meeting solely for students to share stories and insights on student culture. Inspiration for the idea first came after Thanksgiving Break when English teacher Eve Goldenberg chose to read some of the responses that students in her class wrote on their fall term exam pertaining to race at Deerfield. Ms. Goldenberg then spoke about the lack of action from the majority in the school— white males—concerning racial issues on campus. “I thought she was dead right,” said Morrow, who was then determined to pursue the issue. When he asked Deida how difficult it was to be a black student on campus, Deida

replied, “Do you want the answer that I tell people, or do you want the truth?” Deida continued to tell Morrow that sometimes he would wake up and ask himself, “Why am I black?” “That was all I needed to hear,” said Morrow. “I was pissed.” Morrow and Deida then came up with the idea to host the talk in the Greer, in order to facilitate a place “where students weren’t afraid to tell the truth about their experiences here at Deerfield.” “We believed truth was the first step,” said Deida. The meeting, which lasted an hour and a half, started off with a bit of hesitance from students, with only two or three people willing to share stories. However, as the meeting went on, the number of people raising their hands to give instances or express insights continued to increase. Among the students who spoke up was Valentina Connell ’16, who didn’t originally intend to share her story, but felt that she would be frustrated with

herself if she didn’t. Connell stated, “If there was at least one person in the audience who identified with my story and felt less alone, then I’m happy.” Additionally, Katie Livingston ‘15 spoke up in the meeting “just to reach out to younger students in the community, [to tell them] that there are other people dealing with what they may be dealing with.” Many students saw the meeting as an opportunity to ignite change in our community, the first step being simply a conversation where people are willing to listen. The diversity among the students who attended the meeting was proof that students of all different races and personalities at Deerfield want to make change, rather than simply a select few. Ali Barber ‘15 asserted, “What was most important about this meeting was the fact that many students from different backgrounds and groups on campus came to listen and share.” “Not enough people know how tough it is for other students,” said Morrow, who is encouraging students on campus to voice their opinions more often. Deida added that the “assumption mentality” on campus that causes students to assume things about their peers whom they may not know well “arose from the fear of questions.” Morrow also achknowledged the fear factor that the Deerfield atmosphere may represent to students who aren’t able to speak up about issues, saying “We need to try and get rid of the fear at Deerfield.” Article continued online at Deerfield.edu/Scroll