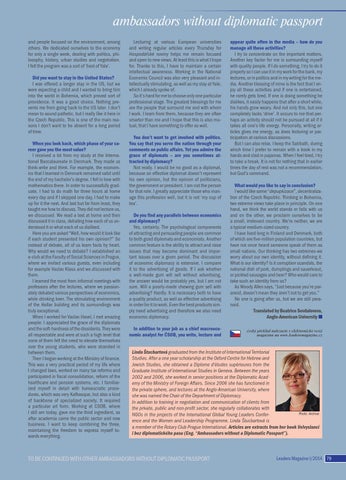 ambassadors without diplomatic passport and people focused on the environment, among others. We dedicated ourselves to the economy for only a single week, dealing with politics, philosophy, history, urban studies and negotiation. I felt the program was a sort of ‘best of Yale’. Did you want to stay in the United States? I was offered a longer stay in the US, but we were expecting a child and I wanted to bring him into the world in Bohemia, which proved sort of providence. It was a good choice. Nothing prevents me from going back to the US later. I don’t mean to sound pathetic, but I really like it here in the Czech Republic. This is one of the main reasons I don’t want to be absent for a long period of time. When you look back, which phase of your career gave you the most value? I received a lot from my study at the International Baccalaureate in Denmark. They made us think-write and think. For example, the economics that I learned in Denmark remained valid until the end of my bachelor’s degree. I fell in love with mathematics there. In order to successfully graduate, I had to do math for three hours at home every day and if I skipped one day, I had to make up for it the next. And last but far from least, they taught me how to discuss. They did not lecture us, we discussed. We read a text at home and then discussed it in class, debating how each of us understood it or what each of us disliked. Here you are asked “Well, how would it look like if each student presented his own opinion?” So instead of debate, all of us learn facts by heart. Why would we need to debate? I established an e-club at the Faculty of Social Sciences in Prague, where we invited various guests, even including for example Vaclav Klaus and we discussed with them. I learned the most from informal meetings with professors after the lectures, where we passionately debated various perspectives of economics, while drinking beer. The stimulating environment of the Hollar building and its surroundings was truly exceptional. When I worked for Vaclav Havel, I met amazing people. I appreciated the grace of the diplomats and the soft-hardness of the dissidents. They were all respectable and were at such a high level that none of them felt the need to elevate themselves over the young students, who were stranded in between them. Then I began working at the Ministry of ﬁnance. This was a very practical period of my life where I changed laws, worked on many tax reforms and participated in ﬁscal consolidation, reform of the healthcare and pension systems, etc. I familiarized myself in detail with bureaucratic procedures, which was very Kafkasque, but also a kind of backbone of specialized society. It required a particular art form. Working at CSOB, where I still am today, gave me the third ingredient, so after academia came the public sector and now business. I want to keep combining the three, maintaining the freedom to express myself towards everything.

Lecturing at various European universities and writing regular articles every Thursday for Hospodářské noviny helps me remain focused and open to new views. At least this is what I hope for. Thanks to this, I have to maintain a certain intellectual awareness. Working in the National Economic Council was also very pleasant and intellectually stimulating, as well as my stay at Yale, which I already spoke of. So it’s hard for me to choose only one particular professional stage. The greatest blessings for me are the people that surround me and with whom I work. I learn from them, because they are often smarter than me and I hope that this is also mutual, that I have something to offer as well. You don’t want to get involved with politics. You say that you serve the nation through your comments on public affairs. Yet you admire the grace of diplomats – are you sometimes attracted by diplomacy? Not really. I would be no good as a diplomat, because an effective diplomat doesn’t represent his own opinion, but the opinion of politicians, the government or president. I am not the person for that role. I greatly appreciate those who manage this profession well, but it is not ‘my cup of tea’.

appear quite often in the media – how do you manage all these activities? I try to concentrate on the important matters. Another key factor for me is surrounding myself with quality people. If I do something, I try to do it properly so I can use it in my work for the bank, my lectures, or in politics and in my writing for the media. Another blessing of mine is the fact that I enjoy all these activities and if one is entertained, he rarely gets tired. If one is doing something he dislikes, it easily happens that after a short while, his hands grow weary. And not only this, but one completely lacks ‘drive’. It occurs to me that perhaps an activity should not be pursued at all if it takes all one’s life energy. Personally, writing articles gives me energy, as does lecturing or participation at various discussions. But I can also relax. I keep the Sabbath, during which time I prefer to remain with a book in my hands and clad in pajamas. When I feel tired, I try to take a break. It is not for nothing that in earlier times the day of rest was not a recommendation, but God’s command.

Do you ﬁnd any parallels between economics and diplomacy? Yes, certainly. The psychological components of attracting and persuading people are common to both good diplomats and economists. Another common feature is the ability to attract and raise issues that may become dominant and important issues over a given period. The discussion of economic diplomacy is extensive. I compare it to the advertising of goods. If I ask whether a well-made gum will sell without advertising, the answer would be probably yes, but I am not sure. Will a poorly-made chewing gum sell with advertising? Hardly. It is necessary both to have a quality product, as well as effective advertising in order for it to work. Even the best products simply need advertising and therefore we also need economic diplomacy.

What would you like to say in conclusion? I would like some “depupkizace”, decentralization of the Czech Republic. Thinking in Bohemia, two extreme views take place in principle. On one hand, we think the world stands or falls with us and on the other, we proclaim ourselves to be a small, irrelevant country. We’re neither, we are a typical medium-sized country. I have lived long in Finland and Denmark, both of which are ﬁve-million population countries, but have not once heard someone speak of them as small nations. Our thinking has two extremes-we worry about our own identity, without deﬁning it. What is our identity? Is it corruption scandals, the national dish of pork, dumplings and sauerkraut, or pickled sausages and beer? Who would care to take such an identity from us? As Woody Allen says, “Just because you’re paranoid, doesn’t mean they aren’t out to get you.” No one is going after us, but we are still paranoid. Translated by Beatrice Sevdalovova, Anglo-American University ■

In addition to your job as a chief macroeconomic analyst for ČSOB, you write, lecture and

Linda Štucbartová graduated from the Institute of International Territorial Studies. After a one year scholarship at the Oxford Centre for Hebrew and Jewish Studies, she obtained a Diplome d’études supérieures from the Graduate Institute of International Studies in Geneva. Between the years 2002 and 2006, she worked in senior positions at the Diplomatic Academy of the Ministry of Foreign Affairs. Since 2006 she has functioned in the private sphere, and lectures at the Anglo-American University, where she was named the Chair of the Department of Diplomacy. In addition to training in negotiation and communication of clients from the private, public and non-proﬁt sector, she regularly collaborates with Photo: Archive NGOs in the projects of the International Global Young Leaders Conference and the Women and Leadership Programme. Linda Štucbartová is a member of the Rotary Club Prague International. Articles are extracts from her book Velvyslanci i bez diplomatického pasu (Eng. “Ambassadors without a Diplomatic Passport”).

TO BE CONTINUED WITH OTHER AMBASSADORS WITHOUT DIPLOMATIC PASSPORT 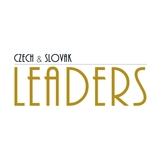