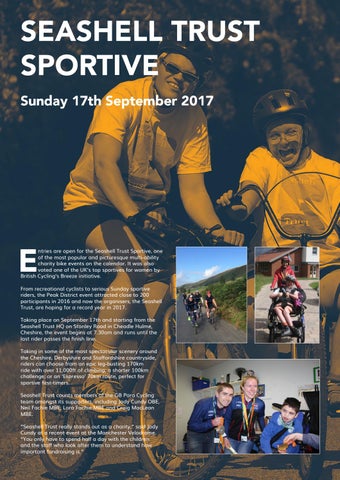 ntries are open for the Seashell Trust Sportive, one of the most popular and picturesque multi-ability charity bike events on the calendar. It was also voted one of the UK’s top sportives for women by British Cycling’s Breeze initiative. From recreational cyclists to serious Sunday sportive riders, the Peak District event attracted close to 200 participants in 2016 and now the organisers, the Seashell Trust, are hoping for a record year in 2017. Taking place on September 17th and starting from the Seashell Trust HQ on Stanley Road in Cheadle Hulme, Cheshire, the event begins at 7.30am and runs until the last rider passes the finish line. Taking in some of the most spectacular scenery around the Cheshire, Derbyshire and Staffordshire countryside, riders can choose from an epic leg-busting 170km ride with over 11,000ft of climbing; a shorter 100km challenge; or an ‘Espresso’ 70km route, perfect for sportive first-timers. Seashell Trust counts members of the GB Para Cycling team amongst its supporters, including Jody Cundy OBE, Neil Fachie MBE, Lora Fachie MBE and Craig MacLean MBE. “Seashell Trust really stands out as a charity,” said Jody Cundy at a recent event at the Manchester Velodrome. “You only have to spend half a day with the children and the staff who look after them to understand how important fundraising is.”