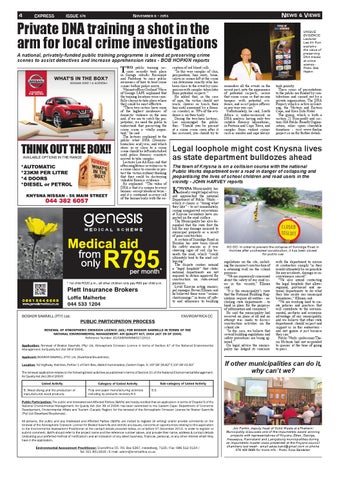 WO public training sessions recently took place in George suburbs Rosemore and Parkdene to raise public awareness of how to treat crime scenes before police arrive. Warrant officer Gerhard Wiese of George SAPS explained that the training locations were carefully chosen to take place where they could be most effective. “These two sectors have some of the highest incidences of domestic violence in the area and, if we are to catch the perpetrators, we need the public to understand that preserving the crime scene is vitally important,” he said. The lectures explained to the public what DNA (Deoxyribonucleic acid) was, and which items in or close to a crime scene should be left undisturbed until police forensic scientists arrived to take samples. Lecturer Lee Ah Kun said that often neighbours or witnesses to a crime chose to console or protect the victim without thinking that they could be destroying valuable forensic evidence. He explained: “The value of DNA is that it is unique to every human - except identical twins and it is contained in every cell of the human body with the ex-

ception of red blood cells. “In this way samples of skin, perspiration, hair roots, bone, saliva or semen left at the scene can determine exactly who has been close to the event by comparison with samples taken later from potential suspects.” He added that, in the case of rape, the victim should not wash, shower or brush their hair until examined by a forensic scientist, as 70% of the evidence is on their body. During the two-hour lectures, Lee encouraged the public thus: “Should you be present at a crime scene soon after it has occurred, you should try to

remember all the events in the recent past, note the appearance of potential suspects, secure that crime scene so that no-one tampers with potential evidence, and assist police officers in any way you can.” Unfortunately, he said, South Africa is under-resourced in DNA analysis having only two suitable forensic laboratories, in Pretoria and Cape Town, and samples from violent crimes such as murder and rape always

took priority. These series of presentations to the public are funded by contributions and carried out by a private organisation, The DNA Project, which is active in Gauteng, the Western and Eastern Cape, and Kwa Zulu Natal. The group, which is both a section 21 Non-profit and section 18A Public Benefit Organisation, relies upon charitable donations - visit www.thedna project.co.za for further details.

NYSNA Municipality has already sought legal advice and approached the national Department of Public Works which it claims is “doing what they like” - to act immediately, saying unapproved excavations at Knysna Secondary have impacted on the road surface. The Municipality has also demanded that the state foot the bill for any damage incurred to municipal property as a result of poor construction. A section of Sunridge Road in Hornlee has now been closed for safety reasons as it was showing signs of soil slip beneath the road, which “could ultimately lead to the road collapsing”. The dispute centres around a “legal loophole” that states national departments are not required to obtain approval for construction on state-owned premises. Livid Knysna acting municipal manager Bevan Ellman said he believed there were “serious shortcomings” in terms of safety and adherence to building

NO GO: In order to prevent the collapse of Sunridge Road in Hornlee after unchecked construction, it has been closed for public use

regulations on the site, including the incorrect construction of a retaining wall on the school premises. “We are immensely concerned about the safety of our road users in this vicinity,” Ellman said. “It is the municipality’s view that the National Building Regulations require all entities - including state departments - to hand in plans for the purposes of information and comment.” He said the municipality had received no plans at all and no attempt was made to discuss construction activities on the school site. “In this case, we believe that several building regulations and safety procedures are being ignored.” On legal advice the municipality has lodged its concerns

with the department to ensure its contractors comply “as they would ultimately be responsible for any accidents, damage or inconvenience caused”. “We also intend contesting the legal loophole that allows regional, provincial and national departments to do what they like inside our municipal boundaries,” Ellman said. “We are working hard to create policies and practices that will contribute to the environmental, aesthetic and economic advantage of our municipality, and we believe that other state departments should respect and support us in this endeavour and not ignore it just because they can.” Public Works spokesman Thami Mchunu had not responded to queries at the time of going to press.

If other municipalities can do it, why can’t we?