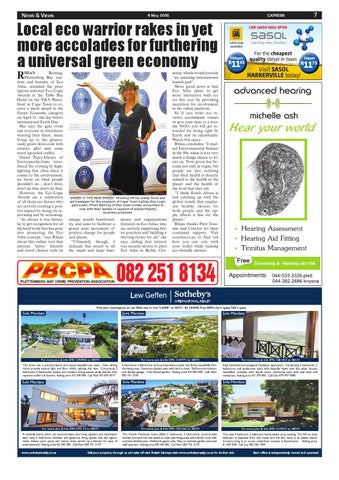 Local eco warrior rakes in yet more accolades for furthering a universal green economy HIAN Berning, Plettenberg Bay resident and founder of Eco Atlas, attended the prestigious national Eco-Logic Awards at the Table Bay Hotel on the V&A Waterfront in Cape Town to receive a merit award in the Green Economy category on April 21 - the day before international Earth Day. She says the gala event saw everyone in attendance wearing their finest, many living up to the glamorously green dress code with creative glitz and some novel upcycled outfits. David Parry-Davies of Enviropaedia-fame introduced the evening by highlighting that often when it comes to the environment, we focus on what people shouldn’t do - don’t litter, don’t do this, don’t do that. However, the Eco-Logic Awards are a celebration of all those eco heroes who are actively creating a positive impact by doing, by innovating and by activating. “As always it was fantastic to get recognition for all the hard work that has gone into pioneering the Eco Atlas concept,” says Rhian about this online tool that informs better lifestyle and travel choices with its

GREEN IS THE NEW GREEN: Showing off her pretty frock and apt headgear for the occasion at Cape Town’s glitzy Eco-Logic gala event, Rhian Berning of Eco Atlas invites consumers to vote with their wallets in support of planet-friendly business practices

unique search functionality, and aims to facilitate a grand scale movement of positive change for people and planet. “Ultimately though, I dedicate this award to all the small and large busi-

nesses and organisations featured on Eco Atlas, who are actively employing better practices and building a thriving future for all,” she says, adding that interest was recently shown to pilot Eco Atlas in Berlin, Ger-

many, which would provide “an amazing international launch pad”. More good news is that Eco Atlas plans to get more interactive with users this year by providing incentives for involvement in the online platform. So if you write eco reviews, recommend venues or give your time to a worthy NGO, you will get rewarded for doing right by Earth and its inhabitants. Watch this space… Rhian concludes: “I studied Environmental Science in the 90s, when it was very much a fringe choice to focus on. Now green has become not only in vogue, but people are also realising that their health is directly related to the health of the planet and the health of the food that they eat. “I think South Africa is fast catching up with the global trends that emphasise healthy choices for both people and the ripple effects it has for the planet.” Rhian thanks Plett Tourism and CemAir for their continued support. Visit ecoatlas.co.za to find out how you can vote with your wallet while making eco-friendly choices.