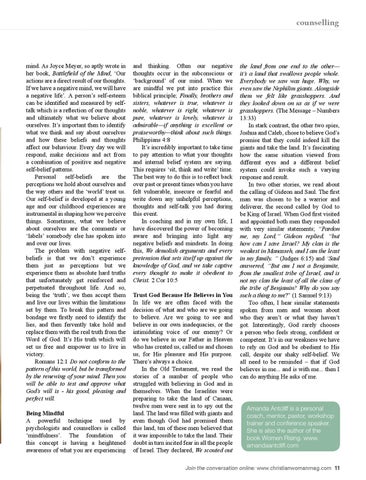 mind. As Joyce Meyer, so aptly wrote in her book, Battlefield of the Mind, ‘Our actions are a direct result of our thoughts. If we have a negative mind, we will have a negative life’. A person’s self-esteem can be identified and measured by selftalk which is a reflection of our thoughts and ultimately what we believe about ourselves. It’s important then to identify what we think and say about ourselves and how these beliefs and thoughts affect our behaviour. Every day we will respond, make decisions and act from a combination of positive and negative self-belief patterns. Personal self-beliefs are the perceptions we hold about ourselves and the way others and the ‘world’ treat us. Our self-belief is developed at a young age and our childhood experiences are instrumental in shaping how we perceive things. Sometimes, what we believe about ourselves are the comments or ‘labels’ somebody else has spoken into and over our lives. The problem with negative selfbeliefs is that we don’t experience them just as perceptions but we experience them as absolute hard truths that unfortunately get reinforced and perpetuated throughout life. And so, being the ‘truth’, we then accept them and live our lives within the limitations set by them. To break this pattern and bondage we firstly need to identify the lies, and then fervently take hold and replace them with the real truth from the Word of God. It’s His truth which will set us free and empower us to live in victory. Romans 12:1 Do not conform to the pattern of this world, but be transformed by the renewing of your mind. Then you will be able to test and approve what God’s will is - his good, pleasing and perfect will. Being Mindful A powerful technique used by psychologists and counsellors is called ‘mindfulness’. The foundation of this concept is having a heightened awareness of what you are experiencing

and thinking. Often our negative thoughts occur in the subconscious or ‘background’ of our mind. When we are mindful we put into practice this biblical principle; Finally, brothers and sisters, whatever is true, whatever is noble, whatever is right, whatever is pure, whatever is lovely, whatever is admirable—if anything is excellent or praiseworthy—think about such things. Philippians 4:8 It’s incredibly important to take time to pay attention to what your thoughts and internal belief system are saying. This requires ‘sit, think and write’ time. The best way to do this is to reflect back over past or present times when you have felt vulnerable, insecure or fearful and write down any unhelpful perceptions, thoughts and self-talk you had during this event. In coaching and in my own life, I have discovered the power of becoming aware and bringing into light any negative beliefs and mindsets. In doing this, We demolish arguments and every pretension that sets itself up against the knowledge of God, and we take captive every thought to make it obedient to Christ. 2 Cor 10:5 Trust God Because He Believes in You In life we are often faced with the decision of what and who are we going to believe. Are we going to see and believe in our own inadequacies, or the intimidating voice of our enemy? Or do we believe in our Father in Heaven who has created us, called us and chosen us, for His pleasure and His purpose. There’s always a choice. In the Old Testament, we read the stories of a number of people who struggled with believing in God and in themselves. When the Israelites were preparing to take the land of Canaan, twelve men were sent in to spy out the land. The land was filled with giants and even though God had promised them this land, ten of these men believed that it was impossible to take the land. Their doubt in turn incited fear in all the people of Israel. They declared, We scouted out

the land from one end to the other— it’s a land that swallows people whole. Everybody we saw was huge. Why, we even saw the Nephilim giants. Alongside them we felt like grasshoppers. And they looked down on us as if we were grasshoppers. (The Message – Numbers 13:33) In stark contrast, the other two spies, Joshua and Caleb, chose to believe God’s promise that they could indeed kill the giants and take the land. It’s fascinating how the same situation viewed from different eyes and a different belief system could invoke such a varying response and result. In two other stories, we read about the calling of Gideon and Saul. The first man was chosen to be a warrior and deliverer, the second called by God to be King of Israel. When God first visited and appointed both men they responded with very similar statements; “Pardon me, my Lord,” Gideon replied, “but how can I save Israel? My clan is the weakest in Manasseh, and I am the least in my family. ” (Judges 6:15) and ‘Saul answered, “But am I not a Benjamite, from the smallest tribe of Israel, and is not my clan the least of all the clans of the tribe of Benjamin? Why do you say such a thing to me?” (1 Samuel 9:13) Too often, I hear similar statements spoken from men and women about who they aren’t or what they haven’t got. Interestingly, God rarely chooses a person who feels strong, confident or competent. It’s in our weakness we have to rely on God and be obedient to His call, despite our shaky self-belief. We all need to be reminded – that if God believes in me... and is with me... then I can do anything He asks of me.

Amanda Antcliff is a personal coach, mentor, pastor, workshop trainer and conference speaker. She is also the author of the book Women Rising. www. amandaantcliff.com