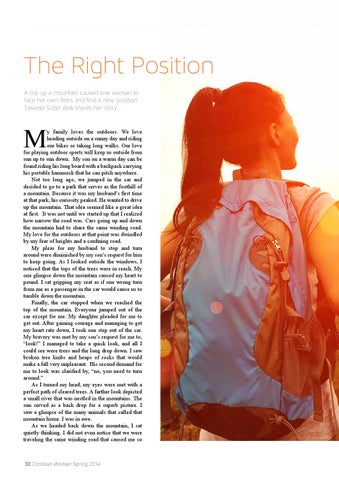 The Right Position A trip up a mountain caused one woman to face her own fears and find a new ‘position’. Tekeela Suber Belk shares her story...

y family loves the outdoors. We love heading outside on a sunny day and riding our bikes or taking long walks. Our love for playing outdoor sports will keep us outside from sun up to sun down. My son on a warm day can be found riding his long board with a backpack carrying his portable hammock that he can pitch anywhere. Not too long ago, we jumped in the car and decided to go to a park that serves as the foothill of a mountain. Because it was my husband’s first time at that park, his curiosity peaked. He wanted to drive up the mountain. That idea seemed like a great idea at first. It was not until we started up that I realized how narrow the road was. Cars going up and down the mountain had to share the same winding road. My love for the outdoors at that point was dwindled by my fear of heights and a confining road. My pleas for my husband to stop and turn around were diminished by my son’s request for him to keep going. As I looked outside the windows, I noticed that the tops of the trees were in reach. My one glimpse down the mountain caused my heart to pound. I sat gripping my seat as if one wrong turn from me as a passenger in the car would cause us to tumble down the mountain. Finally, the car stopped when we reached the top of the mountain. Everyone jumped out of the car except for me. My daughter pleaded for me to get out. After gaining courage and managing to get my heart rate down, I took one step out of the car. My bravery was met by my son’s request for me to, “look!” I managed to take a quick look, and all I could see were trees and the long drop down. I saw broken tree limbs and heaps of rocks that would make a fall very unpleasant. His second demand for me to look was clarified by, “no, you need to turn around.” As I turned my head, my eyes were met with a perfect path of cleared trees. A farther look depicted a small river that was nestled in the mountains. The sun served as a back drop for a superb picture. I saw a glimpse of the many animals that called that mountain home. I was in awe. As we headed back down the mountain, I sat quietly thinking. I did not even notice that we were traveling the same winding road that caused me so

The latest issue of CW is out now! Bonus Find a Christian College magazine inside...