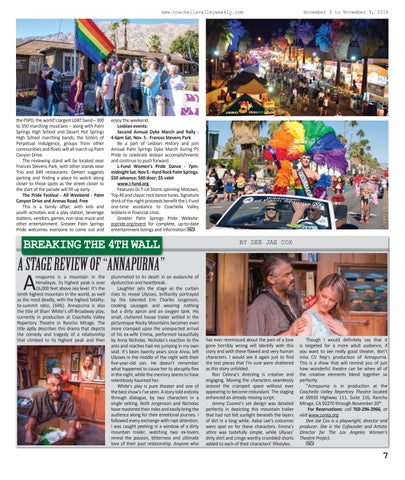 the PSPD, the world’s largest LGBT band – 300 to 350 marching musicians – along with Palm Springs High School and Desert Hot Springs High School marching bands, the Sisters of Perpetual Indulgence, groups from other communities and floats will all march up Palm Canyon Drive. The reviewing stand will be located near Frances Stevens Park, with other stands near Trio and 849 restaurants. DeHart suggests parking and finding a place to watch along closer to those spots as the street closer to the start of the parade will fill up early. The Pride Festival - All Weekend - Palm Canyon Drive and Arenas Road. Free This is a family affair, with kids and youth activities and a play station, beverage stations, vendors, games, non-stop music and other entertainment. Greater Palm Springs Pride welcomes everyone to come out and

A STAGE REVIEW OF “ANNAPURNA”

nnapurna is a mountain in the Himalayas. Its highest peak is over 26,000 feet above sea level. It’s the tenth highest mountain in the world, as well as the most deadly, with the highest fatalityto-summit ratio, (34%). Annapurna is also the title of Sharr White’s off-Broadway play, currently in production at Coachella Valley Repertory Theatre in Rancho Mirage. The title aptly describes this drama that depicts the comedy and tragedy of a relationship that climbed to its highest peak and then

plummeted to its death in an avalanche of dysfunction and heartbreak. Laughter sets the stage as the curtain rises to reveal Ulysses, brilliantly portrayed by the talented Eric Charles Jorgenson, cooking sausages and wearing nothing but a dirty apron and an oxygen tank. His small, cluttered house trailer settled in the picturesque Rocky Mountains becomes even more cramped upon the unexpected arrival of his ex-wife Emma, performed beautifully by Anna Nicholas. Nicholas’s reaction to the ants and roaches had me jumping in my own seat. It’s been twenty years since Anna, left Ulysses in the middle of the night with their five-year-old son. He doesn’t remember what happened to cause her to abruptly flee in the night, while the memory seems to have relentlessly haunted her. White’s play is pure theater and one of the best show’s I’ve seen. A story told entirely through dialogue, by two characters in a single setting. Both Jorgenson and Nicholas have mastered their roles and easily bring the audience along for their emotional journey. I followed every exchange with rapt attention. I was caught peeking in a window of a dirty mountain trailer, watching two ex-lovers reveal the passion, bitterness and ultimate love of their past relationship. Anyone who

has ever reminisced about the pain of a love gone horribly wrong will identify with this story and with these flawed and very human characters. I would see it again just to find the lost pieces that I’m sure were shattered as this story unfolded. Ron Celona’s directing is creative and engaging. Moving the characters seamlessly around the cramped space without ever appearing to become redundant. The staging enhanced an already moving script. Jimmy Cuomo’s set design was detailed perfectly in depicting this mountain trailer that had not felt sunlight beneath the layers of dirt in a long while. Aalsa Lee’s costumes were spot on for these characters. Emma’s attire was tastefully simple, while Ullyses’ dirty shirt and cringe worthy crumbled shorts added to each of their characters’ lifestyles.

Though I would definitely say that it is targeted for a more adult audience, if you want to see really good theater, don’t miss CV Rep’s production of Annapurna. This is a show that will remind you of just how wonderful theatre can be when all of the creative elements blend together so perfectly. “Annapurna is in production at the Coachella Valley Repertory Theatre located at 69930 Highway 111, Suite 116, Rancho Mirage, CA 92270 through November 20th. For Reservations: call 760-296-2966, or visit www.cvrep.org Dee Jae Cox is a playwright, director and producer. She is the Cofounder and Artistic Director for The Los Angeles Women’s Theatre Project.