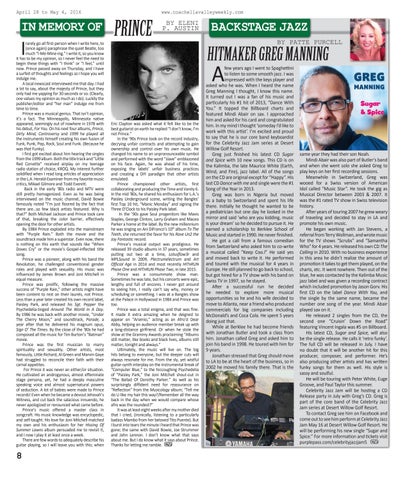 rarely go all first-person when I write here, to (once again) paraphrase the quiet Beatle, too much “I-Me-Mine-ing.” I write it, so you know it has to be my opinion, so I never feel the need to begin these things with “I think” or “I feel,” until now. Prince passed away on Thursday, and I have a surfeit of thoughts and feelings so I hope you will indulge me. A local newscast interviewed me that day. I had a lot to say, about the majesty of Prince, but they only had me yapping for 30 seconds or so. (Clearly, one values my opinion as much as I do). Luckily the publisher/editor and “her man” indulge me from time to time. Prince was a musical genius. That isn’t opinion, it’s a fact. The Minneapolis, Minnesota native appeared, seemingly out of nowhere in 1978 with his debut, For You. On his next four albums, Prince, Dirty Mind, Controversy and 1999 he played all the instruments himself creating his own fusion of Funk, Punk, Pop, Rock, Soul and Funk. (Because he was that Funky). I first got excited about him hearing the singles from the 1999 album. Both the title track and “Little Red Corvette” received airplay on my teenage radio station of choice, KROQ. My interest further solidified when I read long articles of appreciation in the L.A. Herald-Examiner from my favorite music critics, Mikael Gilmore and Todd Everett. Back in the early ‘80s radio and MTV were still pretty homogenized. Even as he was being interviewed on the music channel, David Bowie famously noted “I’m just floored by the fact that there are…so few black artists featured. Why is that?” Both Michael Jackson and Prince took care of that, breaking the color barrier, effectively opening the door for other artists. By 1984 Prince exploded into the mainstream with “Purple Rain.” Both the movie and the soundtrack made him a superstar. Even now, there is nothing on this earth that sounds like “When Doves Cry” or the movie’s Gospel-inflected title song. Prince was a pioneer, along with his band the Revolution, he challenged conventional gender roles and played with sexuality. His music was influenced by James Brown and Joni Mitchell in equal measure. Prince was prolific, following the massive success of “Purple Rain,” other artists might have been content to rest on their laurels, not Prince. Less than a year later created his own record label, Paisley Park, and released his Sgt. Pepper the Psychedelia-tinged Around The World In A Day. By 1986 he was back with another movie, “Under The Cherry Moon,” and soundtrack, Parade, a year after that he delivered his magnum opus, Sign O’ The Times. By the close of the ‘80s he had composed all the music for Tim Burton’s “Batman” movie. Prince was the first musician to marry spirituality and sexuality. Other artists, most famously, Little Richard, Al Green and Marvin Gaye had struggled to reconcile their faith with their carnal appetites. For Prince it was never an either/or situation. He cultivated an androgynous, almost effeminate stage persona, yet, he had a deeply masculine speaking voice and almost supernatural powers of seduction. A lot of babies were made to Prince records! Even when he became a devout Jehovah’s Witness, and cut back the salacious innuendo, he never apologized or renounced what came before. Prince’s music offered a master class in songcraft. His music knowledge was encyclopedic, and self-taught. His love for Joni Mitchell matched my own and his enthusiasm for her Hissing Of Summer Lawns album persuaded me to revisit it, and I now I play it at least once a week. There are few words to adequately describe his guitar playing, so I will leave you with this; when

Eric Clapton was asked what it felt like to be the best guitarist on earth he replied “I don’t know, I’m not Prince.” In the ‘90s Prince took on the record industry, decrying unfair contracts and attempting to gain ownership and control over his own music. He changed his name to an unpronounceable symbol and performed with the word “slave” emblazoned on his face. Again, he was ahead of his time, exposing the labels’ unfair business practices and creating a DIY paradigm that other artists emulated. Prince championed other artists, first collaborating and producing the Time and Vanity 6. In the mid ‘80s, he shared his enthusiasm for L.A.’s Paisley Underground scene, writing the Bangles’ first Top 10 hit, “Manic Monday” and signing the Three O’Clock to his Paisley Park label. In the ‘90s gave Soul progenitors like Mavis Staples, George Clinton, Larry Graham and Maceo Parker a home at the label. By the new millennium he was singing on Ani DiFranco’s 10th album To The Teeth, she returned the favor for his Rave Un2 the Joy Fantastic record. Prince’s musical output was prodigious. He released 39 studio albums in 37 years, sometimes putting out two at a time, Lotusflow3r and MPLSound in 2009, Plectrumelectrum and Art Official Age in 2014 and most recently HITnRUN Phase One and HITnRUN Phase Two, in late 2015. Prince was a consummate show man. Sometimes he was late, but his concerts were epic, lengthy and full of encores. I never got around to seeing him, I really can’t say why, money or scheduling or something. I was at a Bangles show at the Palace in Hollywood in 1984 and Prince was too. Prince was a total enigma, and that was fine. It made it extra amazing when he deigned to appear on “Arsenio,” acting as an Afro’d Dear Abby, helping an audience member break up with a long-distance girlfriend. Or when he stole the show at the Grammy Awards proclaiming “Albums still matter, like books and black lives, albums still matter, tonight and always.” Ultimately, the music will live on. The big hits belong to everyone, but the deeper cuts will always resonate for me. From the sly, yet wistful guitar-synth interplay on the instrumental break of “Computer Blue,” to the hiccoughing Psychedelia of “Paisley Park,” the Joni Mitchell shout-out in “The Ballad Of Dorothy Parker.” As well as his surprisingly diffident need for reassurance on “Reflection” from the Musicology album; “Tell me do U like my hair this way?/Remember all the way back in the day when we would compare whose afro was the roundest?” It was at least eight weeks after my mother died that I cried, (ironically, listening to a particularly badass Mambo from her beloved Tito Puente). But I burst into tears the minute I heard that Prince was gone; the same with David Bowie, Joe Strummer and John Lennon. I don’t know what that says about me. But I do know what it says about Prince. Thanks for letting me ramble.

few years ago I went to Spaghettini to listen to some smooth jazz. I was impressed with the keys player and asked who he was. When I heard the name Greg Manning I thought, I know this name. It turned out I was a fan of his music and particularly his #1 hit of 2013, “Dance With You.” It topped the Billboard charts and featured Mindi Abair on sax. I approached him and asked for his card and congratulated him. In my mind I thought ‘someday I’d like to work with this artist’. I’m excited and proud to say that he is our core band keyboardist for the Celebrity Jazz Jam series at Desert Willow Golf Resort. Greg just finished his latest CD Sugar and Spice with 10 new songs. This CD is on the Kalimba, the late Maurice White (Earth, Wind, and Fire), jazz label. All of the songs on the CD are original except for “Happy”. His last CD Dance with me and single were the #1 Song of the Year in 2013. Greg was born in Nigeria but moved as a baby to Switzerland and spent his life there. Initially he thought he wanted to be a pediatrician but one day he looked in the mirror and said ‘who are you kidding, music is your dream’ so he decided to pursue it. He earned a scholarship to Berklee School of Music and started in 1990. He never finished. He got a call from a famous comedian from Switzerland who asked him to co-write a musical called “Keep Coo.l” He said yes and moved back to write it. He performed and toured with the musical for 4 years in Europe. He still planned to go back to school, but got hired for a TV show with his band on Swiss TV in 1997, so he stayed. After a successful run he decided he needed to explore more musical opportunities so he and his wife decided to move to Atlanta, near a friend who produced commercials for big companies including McDonald’s and Coca Cola. He spent 5 years doing just that. While at Berklee he had become friends with Jonathan Butler and took a class from him. Jonathan called Greg and asked him to join his band in 1998. He toured with him for 9 years. Jonathan stressed that Greg should move to LA to be at the heart of the business, so in 2002 he moved his family there. That is the

same year they had their son Noah. Mindi Abair was also part of Butler’s band and when she went solo she asked Greg to play keys on her first recording sessions. Meanwhile in Switzerland, Greg was wooed for a Swiss version of American Idol called “Music Star”. He took the gig as Musical Director between 2003 &amp; 2007. It was the #1 rated TV show in Swiss television history. After years of touring 2007 he grew weary of traveling and decided to stay in LA and promote his own music. He began working with Jan Stevens, a referral from Terry Wollman, and wrote music for the TV shows “Scrubs” and “Samantha Who” for 4 years. He released his own CD The Calling in 2010. With no business experience in this area he didn’t realize the amount of promotion it takes to get them played, on the charts, etc. It went nowhere. Then out of the blue, he was contacted by the Kalimba Music jazz label and was given a recording contract which included promotion by Jason Gorv. His first CD on the label Dance With You, and the single by the same name, became the number one song of the year. Mindi Abair played sax on it. He released 2 singles from the CD, the second one “Cruisin’ Down the Road” featuring Vincent Ingala was #5 on Billboard. His latest CD, Sugar and Spice, will also be the single release. He calls it ‘retro funky’. The full CD will be released in July. I have no doubt that it will be another hit for this producer, composer, and performer. He’s also producing other artists and has written funky songs for them as well. His style is sassy and soulful. He will be touring with Peter White, Euge Groove, and Paul Taylor this summer. Celebrity Jazz Jam will be hosting a CD Release party in July with Greg’s CD. Greg is part of the core band of the Celebrity Jazz Jam series at Desert Willow Golf Resort. To contact Greg see him on Facebook and come out to see him perform at Celebrity Jazz Jam May 16 at Desert Willow Golf Resort. He will be performing his new single “Sugar and Spice.” For more information and tickets visit purplepass.com/celebrityjazzjam5