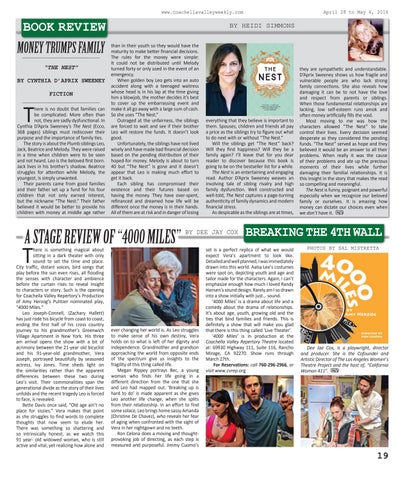 ----------------------------------------------------here is no doubt that families can be complicated. More often than not, they are sadly dysfunctional. In Cynthia D’Aprix Sweeney’s The Nest (Ecco, 368 pages) siblings must rediscover their purpose and the importance of family ties. The story is about the Plumb siblings Leo, Jack, Beatrice and Melody. They were raised in a time when children were to be seen and not heard. Leo is the beloved first born. Jack lives in his brother’s shadow. Beatrice struggles for attention while Melody, the youngest, is simply unwanted. Their parents came from good families and their father set up a fund for his four children that not only earned interest, but the nickname “The Nest.” Their father believed it would be better to provide his children with money at middle age rather

BY HEIDI SIMMONS than in their youth so they would have the maturity to make better financial decisions. The rules for the money were simple: It could not be distributed until Melody turned forty or only used in the event of an emergency. When golden boy Leo gets into an auto accident along with a teenaged waitress whose head is in his lap at the time giving him a blowjob, the mother decides it’s best to cover up the embarrassing event and make it all go away with a large sum of cash. So she uses “The Nest.” Outraged at the unfairness, the siblings are forced to wait and see if their brother Leo will restore the funds. It doesn’t look good. Unfortunately, the siblings have not lived wisely and have made bad financial decision based on the pending distribution of their hoped-for money. Melody is about to turn 40 but “The Nest” is gone and it doesn’t appear that Leo is making much effort to get it back. Each sibling has compromised their existence and their futures based on having the money. They have over-spent, refinanced and dreamed how life will be different once the money is in their hands. All of them are at risk and in danger of losing

everything that they believe is important to them. Spouses, children and friends all pay a price as the siblings try to figure out what to do next with or without “The Nest.” Will the siblings get “The Nest” back? Will they find happiness? Will they be a family again? I’ll leave that for you dear reader to discover because this book is going to be on the bestseller list for a while. The Nest is an entertaining and engaging read. Author D’Aprix Sweeney weaves an involving tale of sibling rivalry and high family dysfunction. Well constructed and well-told, The Nest captures a page-turning authenticity of family dynamics and modern financial stress. As despicable as the siblings are at times,

here is something magical about sitting in a dark theater with only sound to set the time and place. City traffic, distant voices, bird songs that play before the sun even rises, all flooding the senses with character and ambience before the curtain rises to reveal insight to characters or story. Such is the opening for Coachella Valley Repertory’s Production of Amy Herzog’s Pulitzer nominated play, “4000 Miles.” Leo Joseph-Connell, (Zachary Hallett) has just rode his bicycle from coast to coast, ending the first half of his cross country journey to his grandmother’s Greenwich Village Apartment in New York. His three am arrival opens the show with a bit of acrimony between the 21-year old bicyclist and his 91-year-old grandmother, Vera Joseph, portrayed beautifully by seasoned actress, Ivy Jones. Time sheds light on the similarities rather than the apparent differences between these two during Leo’s visit. Their commonalities span the generational divide as the story of their lives unfolds and the recent tragedy Leo is forced to face, is revealed. Bette Davis once said, “Old age ain’t no place for sissies.” Vera makes that point as she struggles to find words to complete thoughts that now seem to elude her. There was something so shattering and so intrinsically honest, as we watch this 91 year- old widowed woman, who is still active and vital, yet realizing how alone and

ever changing her world is. As Leo struggles to make sense of his own destiny, Vera holds on to what is left of her dignity and independence. Grandmother and grandson approaching the world from opposite ends of the spectrum give us insights to the fragility of this thing called life. Megan Rippey portrays Bec, a young woman who finds her life going in a different direction from the one that she and Leo had mapped out. ‘Breaking up is hard to do’ is made apparent as she gives Leo another life change, when she splits from their relationship. In an effort to find some solace, Leo brings home sassy Amanda (Christine De Chavez), who reveals her fear of aging when confronted with the sight of Vera in her nightgown and no teeth. Ron Celona does a moving and thoughtprovoking job of directing, as each step is measured and purposeful. Jimmy Cuomo’s

they are sympathetic and understandable. D’Aprix Sweeney shows us how fragile and vulnerable people are who lack strong family connections. She also reveals how damaging it can be to not have the love and respect from parents or siblings. When those fundamental relationships are lacking, low self-esteem runs amok and often money artificially fills the void. Most moving to me was how the characters allowed “The Nest” to take control their lives. Every decision seemed desperate as they considered the pending funds. “The Nest” served as hope and they believed it would be an answer to all their problems. When really it was the cause of their problems and ate up the precious moments of their lives while further damaging their familial relationships. It is this insight in the story that makes the read so compelling and meaningful. The Nest is funny, poignant and powerful especially when we recognize our beloved family or ourselves. It is amazing how money can dictate our choices even when we don’t have it.

set is a perfect replica of what we would expect Vera’s apartment to look like. Detailed and well planned, I was immediately drawn into this world. Aalsa Lee’s costumes were spot on, depicting youth and age and tailor made for the characters. Again, I can’t emphasize enough how much I loved Randy Hansen’s sound design. Rarely am I so drawn into a show initially with just… sound. ‘4000 Miles’ is a drama about life and a comedy about the drama of relationships. It’s about age, youth, growing old and the ties that bind families and friends. This is definitely a show that will make you glad that there is this thing called ‘Live Theater’. ‘4000 Miles’ is in production at the Coachella Valley Repertory Theatre located at: 69930 Highway 111, Suite 116, Rancho Mirage, CA 92270. Show runs through March 27th. For Reservations: call 760-296-2966, or visit www.cvrep.org

Dee Jae Cox, is a playwright, director and producer. She is the Cofounder and Artistic Director of The Los Angeles Women’s Theatre Project and the host of, “California Woman 411”.